I thought I'd join up with Rosie today to celebrate Mother's Day with y'all.  That's right, I say "y'all" now--because I'm a Southerner, have you heard? 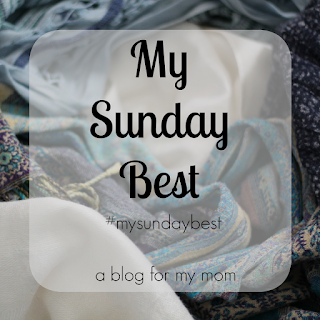 (I know I'm a day late, but that's the way I seem to roll these days.  And better late than never, so they say.)

Not that my Mother's Day Mass outfit was really anything to write home (or blog) about, mind you.  But it was a good excuse to post something here, and better yet, to link up with some other fine ladies.  And maybe to talk about some other stuff, too, besides my $15 Sam's Club shift and $16.99 TJ Maxx cardigan. 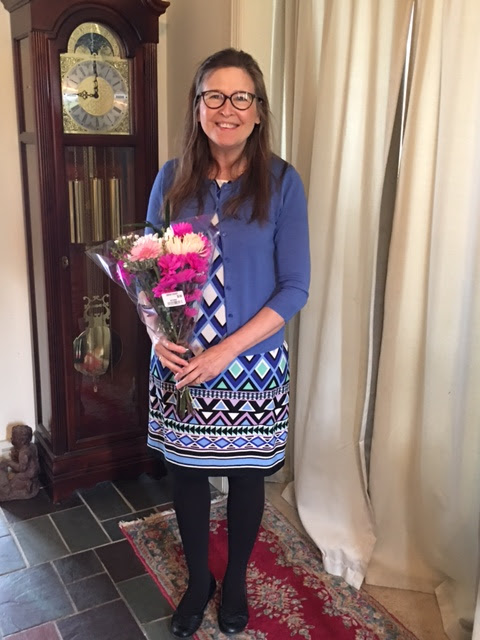 I almost returned this dress right after I bought it, because I thought that the modern geometric print was a tad too bold for me, that the hem was a couple of inches too short, and that in general it fit just a wee bit too tightly.  Meaning that it wasn't about too sizes too big, which is my favorite fit when it comes to dresses.  (I am always happiest in loose-fitting garments--layers upon layers of them.)

This wrinkle-free polyester dress has short sleeves and can be worn alone, but I like it best paired with a 3/4-sleeve cardi (as they call them in fashion circles).  Because like I said before: layers.

Those flowers I'm holding were a little Mother's Day remembrance from my husband, and I think they made a nice accessory to my outfit.

This past week we've been in our old hometown in upstate NY, taking care of our Oyster Haven VRBO house.  We have our first renters of the season, who came for a graduation celebration. So my husband and I attended the 7:30 Mass yesterday morning at his old parish church, the one where we were married in 1980.  It is such a magnificent church; it looks like a cathedral, truly.  I wish I'd thought to take pictures, but I didn't know that I was going to blog until we got home from Mass.  Luckily I had this photo (taken on our wedding day) stored on my computer, to give you an idea of the beauty and grandeur of this church. 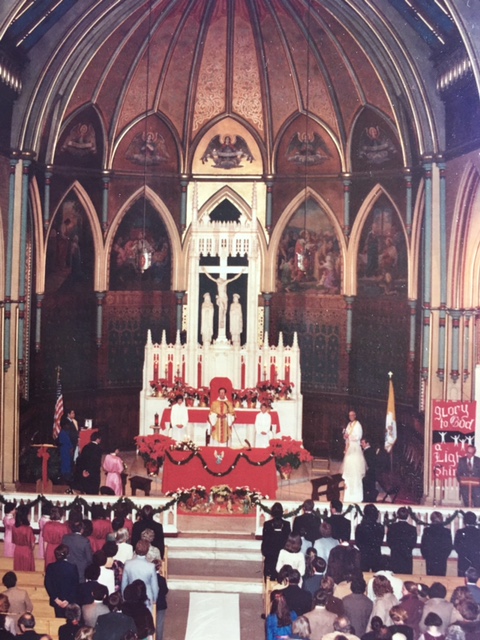 Before the final blessing, the pastor invited all the mothers in the congregation to come up and gather around the altar for a special Mother's Day blessing, and then he passed out little gifts.  It was very sweet.
Once we were back home (at my husband's childhood home by the lake, where we've been staying for the week), I got to work on the dishes I had promised to make for the Mother's Day brunch hosted by one of my sisters and her hubby.  I'd already made a chocolate brownie bundt cake--using a boxed chocolate cake mix and a boxed brownie mix, and covered in chocolate ganache--a few days earlier, and it had been frozen to preserve its freshness and then thawed the night before.  I thought it was going to be SO delish, and if it was a winner, I had planned share the recipe here at the blog.  But it was just sort of "meh."  I mean, it was good, don't get me wrong, because it was chocolate cake; but it was not nearly as out-of-the-ordinary as I thought it was going to be.

Aside from the cake, I was on fruit and vegetable duty.  I always love putting together fruit and veggie platters, because although they require minimal effort they're so colorful and pretty.

And they make you feel better about eating chocolate cake.

I ate so much at brunch that I couldn't eat any dinner.  (Although I did eat a another slice of that ordinary-but-still-yummy chocolate cake...)

It was so wonderful to spend Mother's Day with my mom and my two sisters (along with their families), and also my sisters' mothers-in-law.  That's a whole lot of top notch mothers right there.


My mother, front and center, is rocking her trademark bright yellow and black, a color combo she pulls off better than anyone I know.  The two ladies flanking her are looking pretty snazzy, too.  I don't know if it's a generational thing or what, but women of a certain age have an aura of glamour about them that we younger gals, raised in a more casual world (one without white gloves, hats, and nylon stockings) don't seem to possess.  One of them said that if she'd known she was going to get her picture taken, she would have dressed better.  And look at those three--they all look sensational.

My beautiful mom is doing so much better these days.  In the months since my dad passed away, she has faced a slew of health issues--not to mention a staggering mountain of grief over losing not only her partner of 60 years, but her home and her independence.  However, it is uplifting to see that she is getting stronger and seems happier and more like her old self, and she is adjusting to life in her assisted living home with grace and determination.  All she wants from us kids for gifts these days are pictures of her family to decorate the cozy corner room that has become her new home.

So instead of flowers, I had a photo enlargement made for her.  Because who wouldn't be cheered up looking at those five handsome boys of mine?  (Rhetorical question, obviously!!) 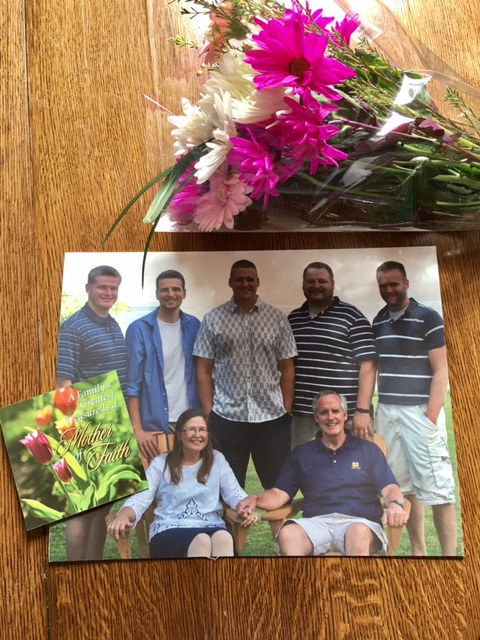 I hope you had the beautiful Mother's Day you deserve, all you moms out there; because just as it says on the cards the priest distributed as we ladies stood around the altar after Mass, "a family's greatest treasure is a mother of faith."