Staging Our House: the Irish Room

We're like the White House around here in our NH house: we've given our bedrooms names. There's the Master (but everyone has one of those, so that doesn't really count).  But there's also the Blue Room, cleverly named for the paint color I put on the walls shortly after we moved in; the Irish Room, named for the theme decorating I did in there once our two oldest boys hadn't occupied it for a few years and it became a dedicated guest room for married sons; and then the Triple (now called our youngest son's room, because for many years it was shared by three brothers, but in the end it was his and his alone).

Also, we've always had lots and lots of stuff on the walls of every bedroom (in fact, on the walls of every room, period) in this house.  I was into the "gallery wall" idea before I even knew that was a thing.  I think I invented the gallery wall, if you want to know the truth.  Or I think my mom did, and then when I grew up and got a house of my own, I decided I would try to take her penchant for plastering the walls with family pictures, decorative plates, and assorted memorabilia to a whole new level.

For example, check out the walls of our dining room (before we got the house ready to sell).  Not only is every bit of wall space occupied by framed family photos, but there are also wallpaper borders-- not only above the chair rail, but up near the ceiling, too, for double the dated fun! 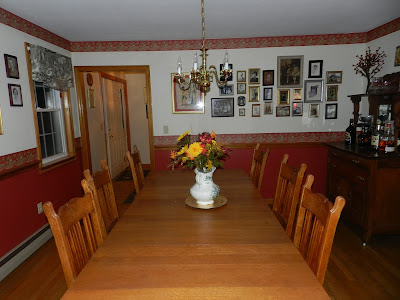 Anyway, after finally getting on board the HGTV train just a couple of years ago (and learning about things we'd never heard of before, like shiplap, travertine, and subway tile), we realized that if we ever decided to sell our house, we were going to need to make a whole lot of changes so that it would appeal to today's discriminating buyers.  (Because one man's "Isn't it neat to walk around a house and see a family's entire history displayed on the walls?" is another man's "Oh my goodness these people have a problem, and I think we need to call the producers of 'Hoarders'!")

So the order of the day was to pare down and simplify every room.

Today I'll show you our Irish Room makeover.  Here's the "Before" shot, with the old gray carpet, the knickknack shelves filled with Irish-themed bric-a-brac, and the Irish flag window toppers.
And here are the "After" shots, with the new laminate hardwood floors, simple white sheer curtains, and considerably less clutter.  (The room has lost its Celtic flair, but I have to admit that it is so much prettier.) 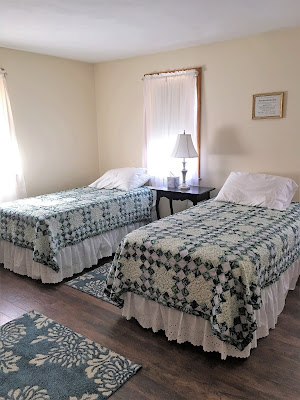 Unfortunately, getting your house ready to sell means stripping it of most of its personality, of most of the items that make it uniquely "yours."  But perhaps that's a good thing--because even though it looks more HGTV-ready now, this room doesn't look like our Irish Room anymore; and that will probably make it easier to leave it behind.

I'll be back with more room makeovers in the coming days or weeks!  (Teaser: the Blue Room is no longer blue!)
Posted by Laura Pearl at 9:16 AM

Email ThisBlogThis!Share to TwitterShare to FacebookShare to Pinterest
Labels: getting ready to sell, home décor, staging your house