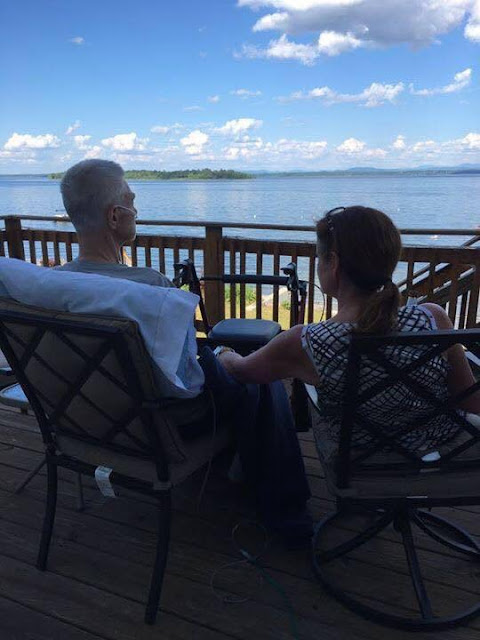 My brother-in-law is dying.

His poor body has been ravaged by a particularly unforgiving form of cancer called mesothelioma, with which he was diagnosed almost exactly a year ago.  Fifty years after exposure to asbestos while doing chimney work as a young man, this terrible disease struck him like a thunderbolt, just as he and my sister-in-law (my husband's older sister and "Irish twin") had begun the process of fulfilling their dream of starting a craft brewery in an old stone Army barracks that dates back to the Civil War.

In spite of all he's been through this past year, this dream became a reality a couple of months ago, and the historical building he and my sister-in-law lovingly transformed into a brewery/sports bar/tasting room/event center/restaurant/B&B has opened for business and has been wildly successful, breathing new life into the hometown where my husband's family has deep roots, going back several generations.

There is nothing more that can be done for my brother-in-law medically now, other than palliative care.  Surgery and chemo and trips back and forth to Boston to receive the most cutting-edge treatments from the foremost experts on the disease did not produce the hoped-for and prayed-for miracle, and he has come home to die.  He is surrounded by people who love him dearly and upon whom he must depend more and more every day to help him with even the simplest of tasks.

This man has always been exceptionally strong, a warrior, a rock for so many people--both personally and professionally.  It has to be hard--not just hard, but truly humbling--to depend on others for everything now, but this guy makes it look easy.  No one who has been privileged to observe the manner in which my brother-in-law handled the news of his diagnosis a year ago, how he endured the harrowing and painful treatments and recoveries in the past months, or how he has exhibited such tremendous heroism as he walks his own personal way of the Cross on the road home to his Father, will ever forget what they have witnessed.  He is showing us the way to die, the way to have a holy death; and it is a lesson I believe I for one badly needed.

Last night, my husband and I attended a party in one of the brewery's event rooms, and I got talking to my old high school biology teacher (who has a special place in her heart for the class of 1976, as we were her first real teaching job after she got her degree).  I mentioned that I was so awed and inspired by the dignity with which my brother-in-law is facing the end of his life.  He is uncomplaining and serene, appreciative of every little thing his loved ones do for him and thanking them profusely.  He is dealing with his own helplessness with such acceptance and grace, it's a wonder to behold.

"I don't like that word, 'dignity,'" she said.  "It has a different connotation now."  And she's right: the pro-euthanasia crowd has hijacked that particular term and made it mean something different to many folks.  There are some who would look at this man who is suffering in a way that no one should have to suffer (yes, but who is surrounded by so much love, who still has the capacity to give and receive love and find an incredible amount of joy in that, whose dying days have profoundly changed and improved the lives of everyone around him) and say that to give him a dignified death,  his pain should be ended at once.  It would be more merciful, they would argue.

But I would argue differently.

The first thing this man said when handed the worst news of his life was, "I want to become a Catholic before I die."  Let that sink in for a minute.

Raised a Lutheran, he was inspired (not pressured, but inspired) by my sister-in-law to convert.  He has been attending Mass for years, even going alone when my sister-in-law and he happened to be apart.  But the official process of entering the Church had not been completed.  Well, I am happy to report that last week, a priest at the parish my husband and his family always attended baptized him a Catholic, and he was able to receive First Holy Communion.  If this had happened even a few days after it did, he might not have been able to swallow the Host.  God is so good!

My brother-in-law is, as my husband says, giving the rest of us a clinic on how to die a holy death.  He is facing the end of his earthly life with courage, grace, and deep faith.  He is graciously allowing his loved ones to give of themselves unconditionally to keep him as comfortable as possible (a privilege which is in fact a tremendous gift that those who never get to witness a truly dignified death completely miss out on).  He is not bitter or resentful, despite his suffering.  He loves life, even now; but he is not afraid to die.  This, I believe, is what death with dignity is really all about.

I realize that it is not our place to automatically canonize our loved ones, no matter how saintly they might seem, when they pass from this life; we are instructed to pray for them unceasingly, for no one but God can know the state of any individual's immortal soul.

But I can't help but feel as if I am watching the making of a saint.
Posted by Laura Pearl at 10:49 AM