He Waved at Us Through the Trees

A week ago yesterday, the youngest of my five sons graduated from the University of Notre Dame.  He's a baby no longer--which I should have grasped when he turned 21, I suppose, more than a year ago.  Or even more so when he hit 22 in early 2015.  One can hardly be considered a baby at 22--after all, that's the age my husband and I were when we exchanged our wedding vows! 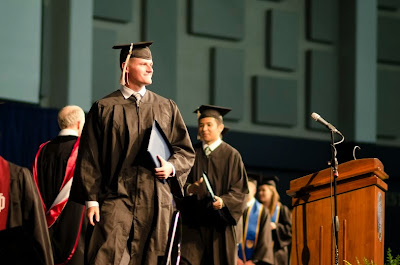 But now, it's official: he's a grown-up--a college graduate and also a newly-minted officer in one of the fine branches of the US military.  I would love to post pictures of his commissioning ceremony last Saturday, the day before his commencement, with one of his older brothers doing the honors of leading him through the recitation of his oath, his dad and me attaching his shoulder boards to his dress uniform, and another older brother pinning his rank onto his beret.  But I'm going to refrain, as I've heard that in these scary times in which we live, it can be dangerous to post pictures of loved ones in uniform on the Internet.  Needless to say, however, his father and I are inordinately proud.

It was wonderful for our youngest boy to have three of his older brothers, with their wives and children, in attendance over the weekend out in South Bend.  My husband and I rented a large, lovely home not far from campus so that we could all stay together comfortably, and it was a very special and memorable time for our family.

Here's our youngest son (the man of the hour) in the middle--standing outside the house he shared this past school year with seven other guys, flanked by son #1 (holding his new baby daughter, City Girl) and son #3 (G-Man's daddy).  There was a party there on Friday night, with all the housemates and their families.  Chipotle was consumed in large quantities. 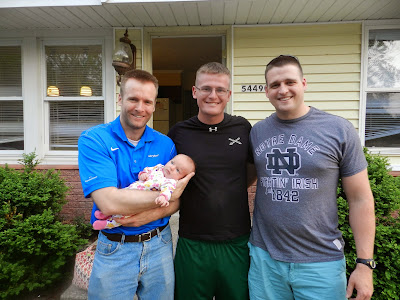 And here's the graduate with son #4, right after the graduation ceremony.﻿
﻿ 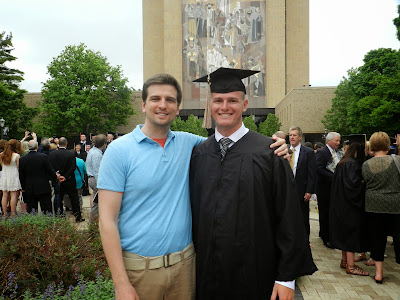 ﻿
All of our grandchildren were there for their uncle's big celebration; all, that is, except for the one who is still in utero.  Son #2, his wife Ginger, and their wee unborn baby were unable to travel from VA to be with us; when it's playoff weekend and you're the defensive coordinator for a high school lacrosse team, sometimes you just can't miss a game.  (And bonus: our teacher/coach-son's team advanced to the finals and ended up winning their conference championship this past week!)

Love me a good family get-together photo op, know what I'm sayin'?  However, getting a picture with our three oldest granddaughters is always a challenge.  It's like herding kittens.  But sitting on the stoop at their uncle's house, we tried our darndest. 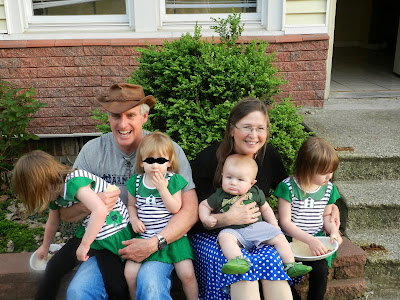 The girls tend to be a bit camera-shy; but not G-Man (a.k.a. "Bubba" or "Bubbs").  He's always ready for his close-up.
And my daughters-in-law are all beautiful and photogenic.﻿﻿
﻿

I don't know if I've ever seen my youngest son look more handsome, or more ready to take on the

world, than he did last Sunday. 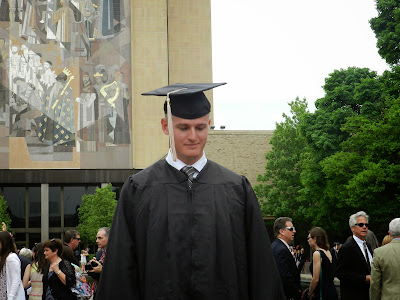 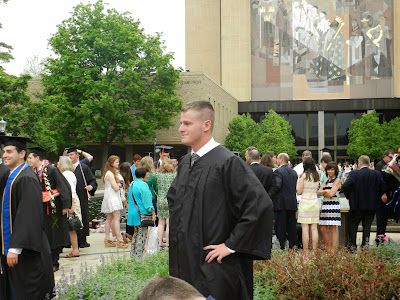 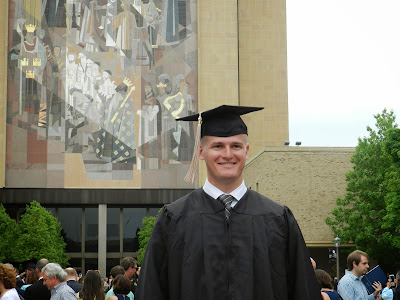 Here he is with his dad, a proud alumnus of the class of 1980, in front of Notre Dame's iconic golden dome. 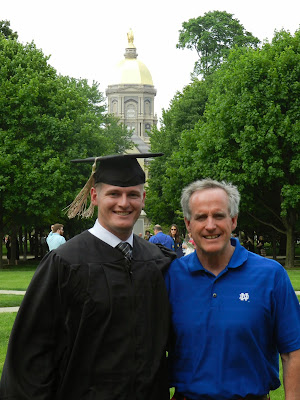 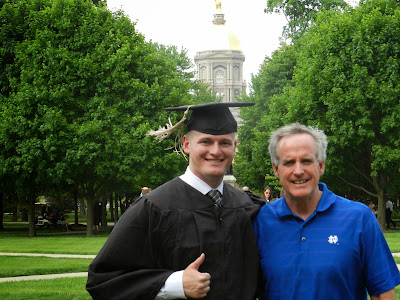 Sometimes, I think I've been around the blogosphere too long already, with over 1,000 posts in my archives since I started out in 2011.  For several years, I blogged almost daily; but I've been having trouble keeping up that pace lately--and trouble believing that I still have anything to offer that can't be found on a million other far more entertaining and engaging sites.

But I guess this been-there/done-that grandmother does have something to share with blog readers, the bulk of whom appear to be young moms in the throes of training their babies to sleep through the night and their toddlers to use the potty, and who are struggling through tears as they send their little ones off to kindergarten.  I can share what it's like to be at what seems like (but isn't!) the end of motherhood, when the school days are over and all the chicks have left the nest for good.  I can share what it's like to welcome new children into your family--in my testosterone-heavy household, that means new daughters only; but many of you will welcome both sons and daughters to your folds.  I can share what it's like to know that you have done your job well (or as well as you could, with the graces God gave you)...and that although that feels wonderful, it also means that your children--those precious souls for whom you lived and breathed for decades, who gave your life such purpose--will not go to sleep under your roof at night on a regular basis anymore.  Indeed, what seemed, when they were babies and toddlers, to be the stuff of sci-fi fiction, will be your new reality: you will not know where they are a lot of the time, or exactly what they're doing, every single moment.  And you will have to let go, hoping that in the way-too-short time you were allotted to shepherd them to adulthood they have learned by your example and guidance what it means to be a child of God and a soldier for Christ.

I can remember my youngest son (the strapping, 6'2" college graduate) as a dear little boy, as clearly as if it was yesterday.  He was a real homebody and very attached to his parents, and whenever his dad and I had to leave him behind at the house (in the good care of his older brothers), he had a routine that never varied.  He would stand by the dining room window that faces our driveway, and as we backed the car out we would roll down our windows and stick our arms out to wave at him, even if it was the dead of winter and freezing cold outside.  As we drove down the street, if we looked back at the house we could see him standing there framed in the window, waving back.  He would remind us each time we left to "wave at him through the trees," meaning we should keep waving until we got far enough from the house that he could no longer see the car through the trees.

"Waving through the trees" was our special tradition.

So as we were getting in our car on Sunday evening to begin the long trek back to NH, leaving him behind to pack up his things, say good-bye to his friends, and head home himself two days later, we asked him if he was going to wave at us through the trees.  "Of course!" he replied.

This is the last view we had of him as we pulled away from his off-campus house in South Bend. 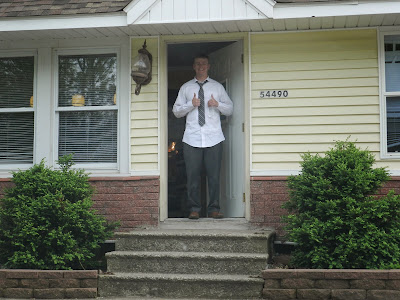 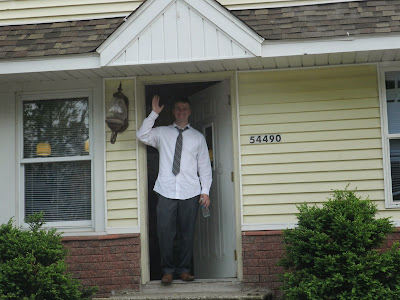 And he did wave at us through the trees.  He waved until we could no longer see him in our rear view mirrors, standing there framed in the doorway.

So that's another thing I can share with young mothers on the front end of that amazing roller coaster ride called parenting: lots will change, but some things never will.  And your babies will always be your babies.﻿
﻿
﻿
﻿
﻿
﻿
Posted by Laura Pearl at 8:19 AM