An Open Book: Come Back to Me (& Ornamental Graces)

I've been somewhat down lately, worrying almost to the point of despair about the dark state of our world: about all the hate and violence; about the bitter divisions; about the intolerance for any belief that is not held by one and all (especially by those folks who tend to be anti-religion in general and anti-authentic Catholic in particular); about the endless "social distancing" (which I've come to think of a tragic loss of normal human interactions and which seems to be producing in many an actual FEAR of being near others); about the masks, which hide the wide range of expressions that normally play across the faces of people who have been created in the image and likeness of God, and which appear to be required for the foreseeable future (if this is our "new normal," no thank you!); about the all-too-real fear that, depending on how the election goes, the freedom to practice our essential Catholic Faith could be taken away from us and that we might, for the first time in the history of this great country, have to literally go underground and/or face true martyrdom...

But just when I think I can't bear it all anymore, I stop looking at news stories, pick up a good novel, and escape into another world (which, albeit fictional, is at least the pre-Covid world that I took for granted when I had it and now miss with every fiber of my being!). 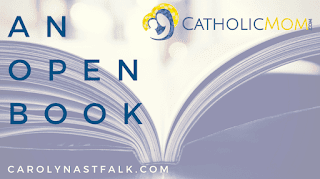 So let's talk about books, shall we?  I'm joining the An Open Book link-up party, hosted by writer Carolyn Astfalk, and as a matter of fact the book I'd like to highlight today is a novel by Carolyn titled Come Back to Me. 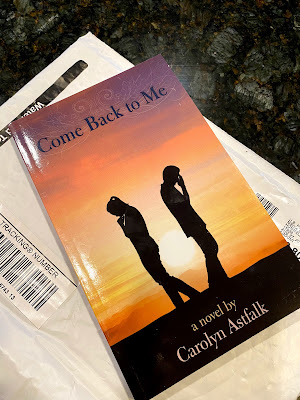 I was thrilled to win a paperback copy of this engaging and thought-provoking work of fiction from the author via an Instagram giveaway.  It is a well-written sequel to her 2015 debut novel  Stay with Me,  a pro-chastity love story which I read a few years ago and enjoyed very much, and I devoured her latest work of fiction in a few sittings.
I have been having an enormous amount of trouble carving out time to blog lately, so I'm going to keep this review brief.  Here is the synopsis on the back cover:
"Alan Reynolds slid into marriage.
When his wife kicks him out, it looks as if he may slide out just as easily. Forced to bunk with his newlywed younger brother and his pregnant wife, Alan gets a firsthand look at a blissfully happy marriage while his wife rebuffs his attempts at a reunion.
Caught in the middle, Alan and his wife's mutual friend Megan grows increasingly unhappy with her own empty relationships.  If that weren't enough, her newly sober brother has found happiness with Jesus, a goody-goody girlfriend, and a cockeyed cat.
When Alan and Megan hit rock bottom, will there be grace enough in their bankrupt lives to right their relationships and find purpose like their siblings have?"
Although Come Back to Me is a sequel (Stay with Me tells the story of Chris and Rebecca's courtship), it is a stand-alone book.  The characters are fully fleshed-out and believable, even the secondary ones, and you will definitely find yourself rooting for them to each find their happy ending.
This is a story about the ways that human beings, who are all fragile, flawed, and broken in some way, can wound each other deeply, but also about their boundless power, with the help of God's grace, to forgive completely.  Indeed, life isn't perfect, people aren't perfect, and every marriage--even the best of them--has its inevitable ups and downs.  Alan and Jamie hit a low point in theirs when they realize that they aren't on the same page about starting a family, and that perhaps they entered into married life too hastily, without truly contemplating the sacramental nature of their vows.  Jamie kicks Alan out in anger, and he goes to live with his brother Chris and his wife Rebecca, a besotted newlywed couple expecting their first baby.  As if it isn't bad enough to be going through what appears to be the dissolution of his own marriage, Alan has to endure daily reminders, by the lovebirds whose privacy he's invaded, about what a ridiculously happy marriage looks like.  I won't give any details about how it all turns out, because I think you should read this book!  But suffice it to say that Come Back to Me drives home the message that love is more than just a feeling, it's a CHOICE--sometimes a really hard one to make.  But when a couple puts God first in their relationship, they can weather all storms.  With God's grace, those promises made in their wedding vows--"for better or for worse"--are much easier to keep.
With the holidays fast approaching, I also want to give a shout-out to another sweet novel by Astfalk, Ornamental Graces.  I read it last year and thoroughly enjoyed it, and I think you will, too! 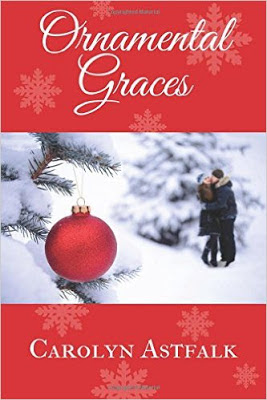 Here's a snippet from my review of this novel, which appeared here at the blog in April 2019:
When I looked at the appealing poinsettia-red cover of Ornamental Graces, which is graced with a Christmas tree ornament, an evergreen branch, and a love-struck couple embracing in the snow, I couldn't help but think that this book would be akin to a sweet and simple Hallmark Christmas movie (you know, a holiday love story with a predictable but satisfying happy ending), but told from a Catholic perspective.  I couldn't have been more wrong.  Astfalk's novel is so much deeper than a Hallmark movie; it tackles some of the most difficult subjects--human frailty, sin (sins against chastity in particular), faith, and redemption--while telling the story of Dan Malone and Emily Kowalski, two twenty-somethings who fall in love but spend most of the novel at cross purposes.  At times, I was reminded of Rhett Butler and Scarlett O'Hara in Gone with the Wind (one of my all-time favorite books), who never seem to be on the same page, even though it is plainly obvious to the reader that they are meant to be together.  Every time Dan and Emily grow closer, something--usually a hidden truth about Dan's checkered past, but sometimes a simple misunderstanding caused by poor communication--tears them apart again.  I wanted to strangle one or both of them a few times!  But those two crazy kids kept me turning the pages--just like Rhett and Scarlett did!
(If you'd like to read the full review of Ornamental Graces, here's a link to that blog post.)
One last note before I sign off:  I often worry about all the negative effects of spending too much time online.  But one of the great unexpected blessings of my years of blogging/writing/posting and scrolling at IG is my online friendship with other Catholic fiction authors--like Carolyn Astfalk, a writer whom I admire immensely for using her God-given talents so well to give glory back to Him.  When my IG giveaway prize arrived in the mail, here's how it was inscribed: 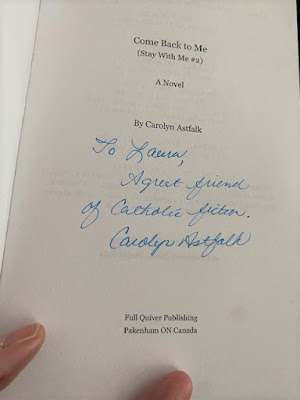 I can't tell you how tickled I am to be considered a great friend of Catholic fiction, a medium that I believe can be a powerful evangelization tool.  Thank you, Carolyn Astfalk, for this lovely compliment.  :)
Now head on over to the link-up, readers, for more book recs.  Because losing yourself in a good book can help you to forget the world's cares--at least for a little while...and perhaps that's good for your soul.
Posted by Laura Pearl at 1:44 PM