Speaking of Fatima...Meet Someone Who Knows a Whole Lot about the Subject!

I mentioned Fatima briefly in yesterday's post, and it got me thinking about something extraordinary that happened way back in October of 2019.  It was the kind of thing I would have blogged about the very next day if it had happened in 2012 or 2013, when I was ablaze with blogging energy and pretty much posting daily here at String of Pearls.  But I haven't been on top of my blogging game for quite some time now, so I never got a post about it written up.  I never even shared it on Instagram.  It felt too important, in a way, to share lightly.

Am I making you curious about what in the world this event could possibly have been?

Well, here's the story.  One night in October, our daughter-in-law Ginger (wife of son #2) invited my husband and me to join the two of them for dinner at a restaurant near their home, and then to see the newly released Downton Abbey movie afterward.  They were going to be treating a couple of very special women who were visiting from Portugal to a dinner-and-a-movie night out, American-style, and they wanted to include us.  Aside from the two Portuguese women who were houseguests of Ginger's folks, a kind and humorous young priest, another friend of Ginger's family, was going to come along, too.

You're not going to believe this, but the special guests were two nuns...from Fatima!  One of them, Sr. Angela de Fatima Coelho, is very close to Ginger's family, and she'd made the trip (along with a sweet young postulant from her order) in part to visit them and to be present for the Baptism of Ginger's younger brother's new baby, for whom she'd been chosen as godmother.  While in the States, Sr. Angela was also slated to give some talks; because, you see, this incredible and holy woman actually plays a very important role in spreading the message of Fatima around the world.  She was nominated in 2009 to become the postulator for the cause of the canonization of then-Blesseds Jacinta and Fransisco Marto (who were named saints on May 13, 2017 by Pope Francis).  And she is currently the vice-postulator for the cause of the beatification of the third and last Fatima visionary, Lucia de Jesus dos Santos.  As if that work--along with the ordinary work of her religious order, the Congregation of the Alliance of Holy Mary--isn't enough, this amazing woman is a practicing medical doctor as well. 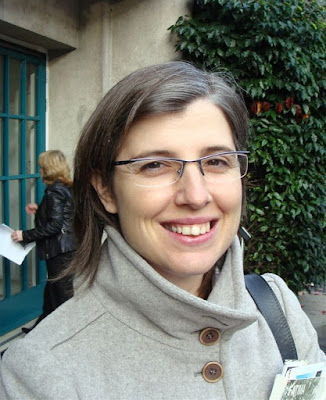 You might assume, with her consecrated status and all the lofty positions she holds, that this lovely young nun would come across as very serious, that she would be a rather intimidating person to meet, that she might act holier-than-thou and not be all that interested in ordinary chit-chat; but I assure you, nothing could be further from the truth.  I have rarely met a funnier, more engaging, more delightful person in my life.  She simply exudes joy!  We talked easily and laughed often throughout the meal.  Sr. Angela speaks accented English fluently, and she was so interested in asking my husband and me about our lives and our family.  She talked about her own life and her work (which includes an overwhelming amount of exhaustive research) with humility, passion, and humor.  She was as down-to-earth as they come, in spite of the monumentally important work she has taken on, work that is so vital to our Catholic Faith.  I just adored her from our first hello, and felt that I was in the presence of someone who is closer to God than most of us mortals.  What a privilege it was to spend that time with her!

The young postulant who accompanied Sr. Angela was shyer and did not speak much English; but she, too, seemed to be just about as good as they come. 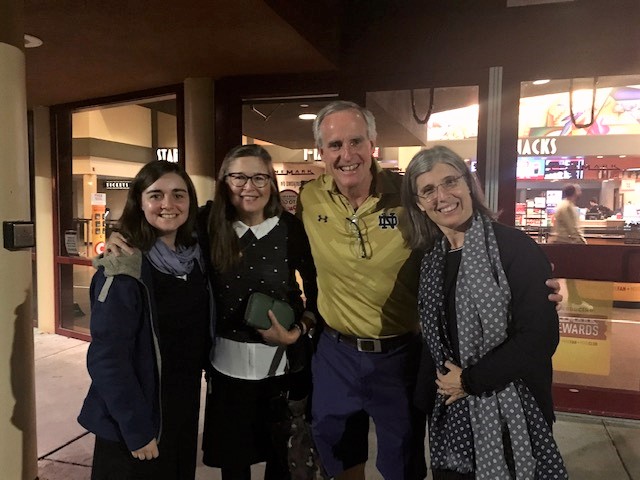 Before we parted for the night in the parking lot of the movie theater, Sr. Angela gave my husband and me some holy cards with pictures of the Three Seers of Fatima on them. 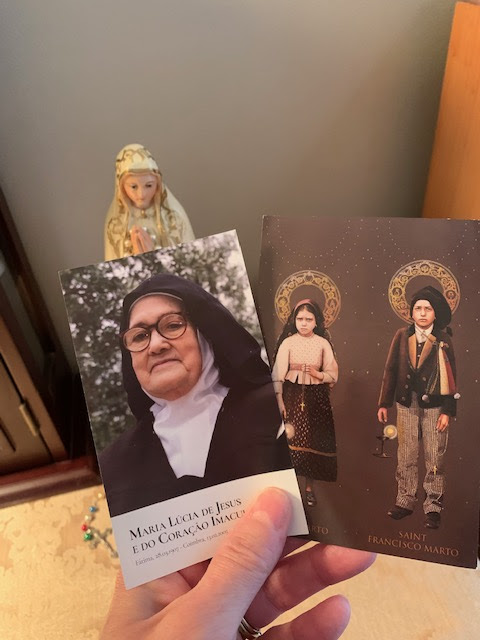 And then I reached into my purse to show her something that I always carry around with me: a relic card with a picture of St. Jacinta on it, which was a gift many years ago from a fellow football mom at our sons' high school.  (She'd made a trip to Fatima and said that when she was there she thought of me, because she knew how much I'd have loved it. I don't believe I've ever received a better compliment--or a sweeter souvenir.) 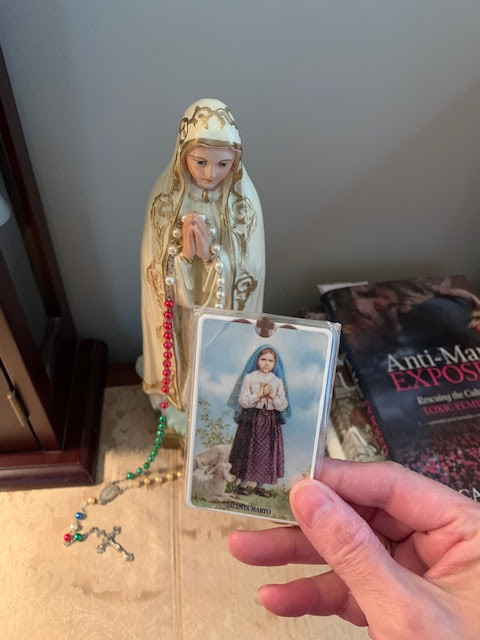 Sr. Angela's face lit up with excitement when I showed her my holy card, as you can see in this photo. 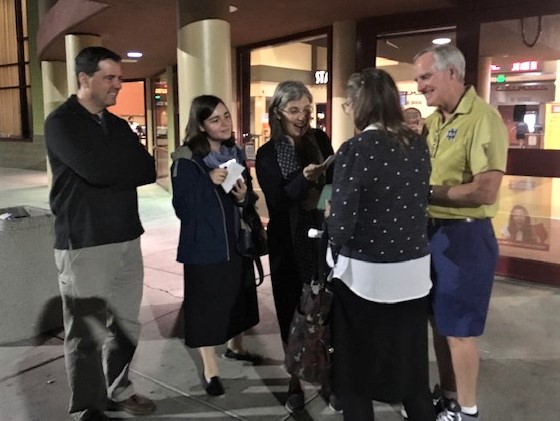 I felt my eyes welling up with tears as my husband and I parted from the group and headed across the parking lot to our car.  As I said, I felt very much as if I'd just been in the presence of someone very close to God--a woman who will probably be a saint herself someday.  It was a very emotional experience for me.

I probably should have explained this at the beginning of this post, but the reason Sr. Angela knows Ginger's family so well is that Ginger's dad has had a deep devotion to Fatima for many years.  He plans and organizes annual trips over there, where he takes on the role of leader to groups of pilgrims.  Fatima is like a second home to him, and he knows many of the priests and nuns who live and work there.  My husband and I affectionately call him "the Mayor of Fatima," and we are in awe of  his dedication to the cause of spreading the message Mary imparted to three young children there in 1917.  In a way, he is doing the same kind of work that Sr. Angela is doing.  And I can only imagine how pleased Mary's Son is with him for his efforts.  May God bless him in this important ministry!

If you'd like to learn more about Sr. Angela and her work, you can read about her here, here, and here. (I guess you can Google her name on your own if you're interested, so I'll stop there.)

God bless dear Sr. Angela de Fatima Coelho in her work.  And Our Lady of Fatima, pray for us!