Back in mid-December, I was given the opportunity to do a book signing at our [relatively] new parish in VA, along with a much better-known and more commercially successful Catholic author, Steven R. Hemler, who has had several non-fiction works published by Tan Books.  Steve is a fellow parishioner, and he was going to be selling and signing copies of his books after Masses that weekend; the lovely woman who manages the church office had been made aware that I had written a couple of Catholic novels when I set up a table to sell them at the parish's annual Christmas craft fair/thrift sale the first winter we lived here, so she very kindly extended an invitation for me to join Steve. 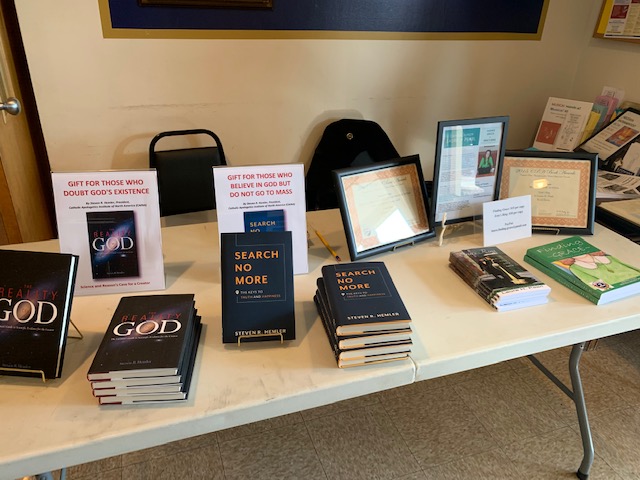 I did not sell a lot of copies of my books that weekend (#parforthecourse), but I had a wonderful time getting to know Steve (who also travels around to speak to groups about the Faith) and having in-depth conversations with him about all the blood, sweat, and tears that go into the process of writing books and getting them published.  He was so kind to me, an unknown greenhorn author, and gave me lots of tips and advice about how I might go about having my books republished (now that they have been discontinued by Bezalel Books, due to poor sales) so that they might reach a larger audience.  He encouraged me to think about breaking up my epic-length novel, Finding Grace, and making it into a two or three book series.  Because while I personally happen to love, love, love long books that don't end too soon, the vast majority of the reading public likes to consume fiction in easier to digest portions.  (The word count for Finding Grace is about 200,000, whereas the popular number of words for a novel is about 50,000, I believe.)


Anyway, Steve gave me a contact at a well-known Catholic publishing house, a friend of his who both works for the company and is a fiction author himself, and encouraged me to get in touch with him.  I did send this person an email inquiring about the possibility of republishing, and I received the most thoughtful, surprisingly long response from this kind gentleman.  I can't even tell you how much it meant to me that he would take the time to write it.

For the past five years, I have felt a bit guilty that Erin's Ring, a book for which I was given an advance and a real author's contract from Cheryl Dickow at Bezalel Books, has not done better.  I've worried that I haven't worked hard enough to figure out how to make it sell, because I really wanted it to have been a good investment for Cheryl, who went out on a limb for me.  She believed that Erin's Ring might find an audience, at least among Catholic homeschoolers, but it has not.

HOWEVER, for the first time in a long time, I feel as if a giant burden has been lifted off my shoulders, because I realize that there really is little I could have done differently that would have made my books commercially successful.  The fellow from the big-name Catholic publishing house told me, "For whatever reason, fiction doesn't sell that well in our market...We don't publish many fiction books but the ones we do are lucky to sell several hundred, while we expect our non-fiction books, whatever the subject matter, to sell between 1K-5K in the first year and continue to sell after that."  So obviously, no publisher is going to want to republish a work of Catholic fiction that has already been discontinued by another publisher because it has failed to sell well after years on the market.  His advice was to "put those other books to rest and focus on something new."

These words sound like they might make an author feel like a terrible failure, but they had the opposite effect on me.  I have been trying to keep promoting my books here and there, over on Instagram, on Facebook, on Twitter, and here on my blog--because as I said, I felt I owed it to my very generous publisher to try to make them sell.  I joined Goodreads and LinkedIn as well, thinking that all those social media platforms might help to get them some exposure.  My marketing and promotion skills are very weak, to put it mildly, but I've tried the best I know how--without much success.  So that email yesterday was a gift!  Knowing now that even if my novels had been published by a bigger company with more name recognition than Bezalel, and even if I had been less shy about promoting them, it's doubtful they would have done any better than they have, I finally feel free of guilt and light of heart--freer and lighter than I've felt in years.  I can, as this helpful insider advised, put those books to rest.

Focusing on something new might be great advice...but I don't seem to have the time and/or passion required to start a third novel these days.  Every life has its definite seasons, and I am in the Grammy season right now, so my career as a fiction author may be coming to an end.  And that book signing at our new parish may be my last ever.  But I am totally at peace with that.

I still have in my possession a fairly large number of copies of both of my novels, which I purchased for book signings, gift-giving, promotional giveaways, or sending to reviewers--and even offering for sale here at the blog.  I don't expect a lot of blog sales will transpire, but that's okay!  I intend to keep whatever copies I have to pass down to the next generation of my ever-growing family, my ever-lengthening string of Pearls.  I would love for these books to be an inspiration to my grandchildren and great-grandchildren; if they have a dream, I want them to reach for it, no matter how unattainable it seems.  And if in the eyes of the world they appear to have failed, I want them to know that they can still consider themselves successful in the only way that matters--if the work they've done has given glory to God, from Whom all blessings flow.

God has a plan; I believe that with all my heart, and I trust that He knows what is best for me and for the state of my soul. He didn't think I'd need a lot of book sales or writing accolades...but He thought I'd need a lot of grandchildren.

You know, I like the way He thinks.
Posted by Laura Pearl at 7:45 AM

I am a lifelong Catholic, happily married to my high school sweetheart, with whom I raised five now grown-up sons. I am thrilled to be a wife, a mother, a "Grammy" (to 14 and counting!), and an author of two Catholic novels. My blessings outnumber the shamrocks in Ireland, 'tis true. And I'm just so glad you stopped by. (Click on the picture and it'll take you to my other blog.)