Sewing, and Thinking of My Mother-in-Law

I meant to write a blog post about my mother-in-law on Nov. 1, her birthday, but family events down here in VA kept me busy and the date got away from me.  We had a tornado watch on Halloween, so trick-or-treating was postponed until the next day.  And after all the excitement was over, I was too tired to blog...but here I am, a day late and a dollar short, as I usually am these days. 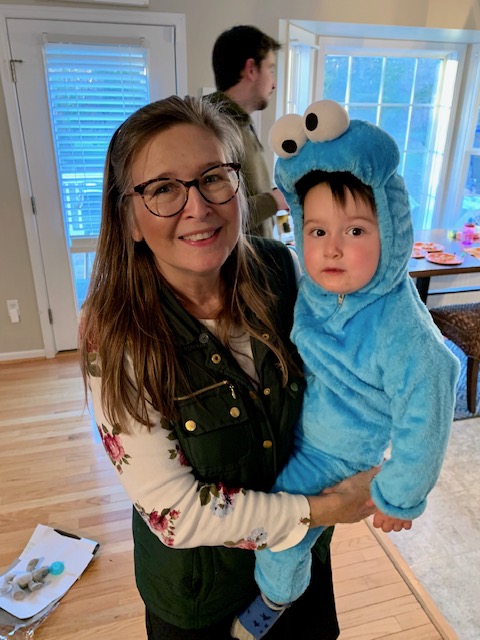 Mom would have been 87 this year.  I can't believe she's been gone 10 years already!  I still miss her and I always will.  I don't think it was an accident that she was born on All Saints Day: never was there a woman more devoted to Our Lord and Our Blessed Mother; never was there a woman who said more Rosaries and novenas for her loved ones.  (She was a daily communicant whenever she was in a season of her life where this was possible, and never was there a woman who would be more thrilled by the fact that her birthday is a holy day of obligation, a day on which all of the children she raised in the Faith would be sure to get to Mass!) 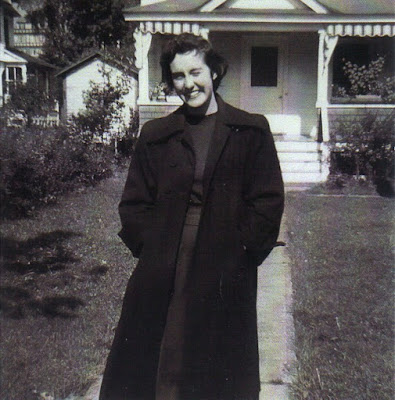 I met this amazing woman--daughter of an Irish immigrant father who died when she was 10, sister to one older brother, and mother to eight children (four boys, four girls)--when I was 15 and started to date her oldest son.  From that very first meeting, I just adored her.  She had that gift of making you feel loved and important, without making too much of a fuss doing it.  She was the best mother-in-law a girl could ever ask for--my role model now that my boys are married; she never judged or interfered, just accepted and supported. 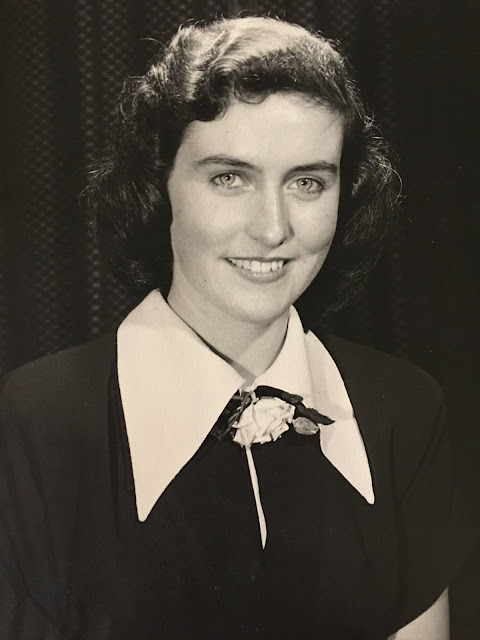 Mom had the soprano voice of an angel--she could seriously have been a professional singer, but she shared her gifts in the church choir instead.  She was a breathtaking beauty, but the least vain person I ever knew.  She was a lover of all things beautiful for the home: china, crystal, Hummels and other figurines, Nativity scenes and Christmas decorations in general, and last but certainly not least, FABRIC.  Mom considered all of these things true works of art and could hardly resist them (particularly if she found them in the aisle marked "clearance sale").  Her attic was filled to the rafters with boxes and bins of every kind of fabric you could imagine, along with laces, ribbons, and all sorts of other sewing notions.  It was like JoAnn Fabrics up there, truly.

In 1997, my in-laws' house caught fire (caused by outdated, faulty electrical wiring) while they were away visiting some of their children.  Fortunately, their home was not completely lost.  But due to the smoke and water damage, the interior had to be mostly gutted and rebuilt.  After the fire, the attic had to be cleared out and the fabric collection assessed, and some of it was too damaged so it was thrown out.  But a remarkably large amount of mom's precious materials (which I'm sure she had many plans for using in the future) were saved and put back up in the attic.

So these days, whenever I need some material for a sewing project, I "go shopping" up there first.  That's where I found the piles of exquisite white linen-and-lace pillow shams that I used to make my grandkids' christening gowns.  And at the end of the summer (which we'd spent living in my husband's childhood home in Upstate NY, while taking care of our nearby Oyster Haven VRBO house), I took a trip to the attic and brought home some plaids for myself and my daughter-in-law Regina, who wanted to make a Christmas stocking for her little boy.  She had already made them for her four daughters, using plaid material from Mom's attic; but she'd run out and asked if I could look for more.

My grandson, Topper, recently turned one.  His mom, my daughter-in-law Ginger, is a huge fan of vintage-style clothes for her three little boys, and I knew she'd appreciate a new Jon Jon romper as a birthday gift for him.  Well, it just so happened that I had some perfect pieces of material from Mom's attic to make some garments for the upcoming holidays: a hunter green velveteen that I'd found a few years ago, and those lovely plaids I'd unearthed this past summer.  So I decided to make two rompers! 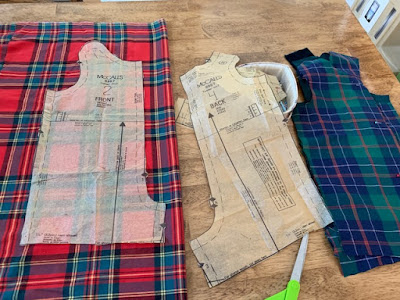 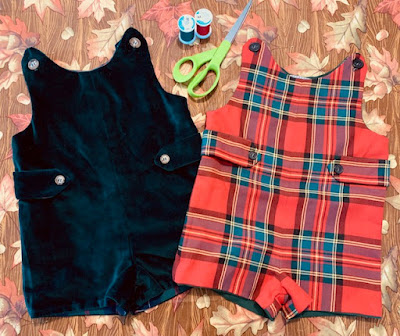 I like to put "made by" tags in the garments I sew for the grandkids, in case they get handed down to a new generation someday.  Topper's two older brothers call me "Ree Ree" instead of Grammy, so that's what I put on the tags for these two Jon Jons. 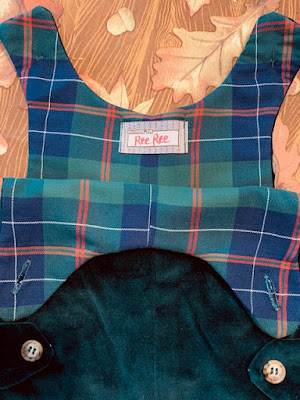 I could hardly wait to see how these rompers would look on my adorable grandson, who has the most heart-melting smile and edible chunky thighs. 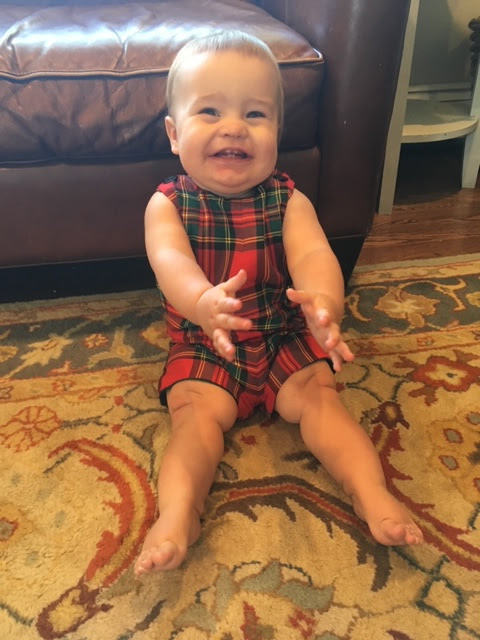 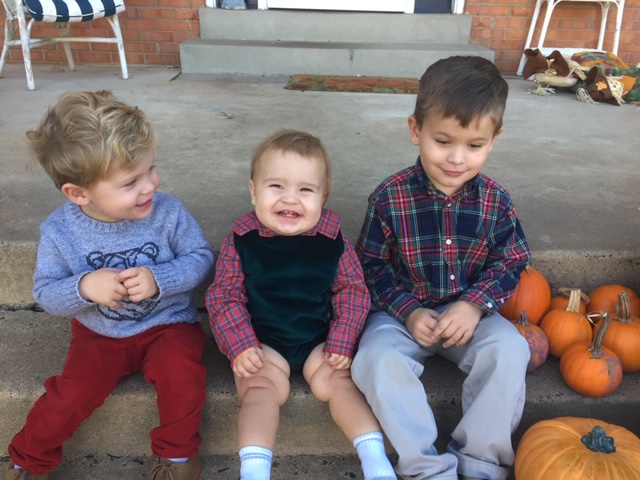 All I can say is that I think my dear mother-in-law would approve of how her stash of fabric is being put to use.  Yes, I think she would very much approve indeed!  And I hope these pictures of her great-grandson wearing rompers made out of some of the pieces she lovingly chose from the clearance racks at JoAnn's are making her smile.

Miss you, Mom!  And when I grow up, I want to be just like you...because I believe you were born on All Saints Day for a reason. 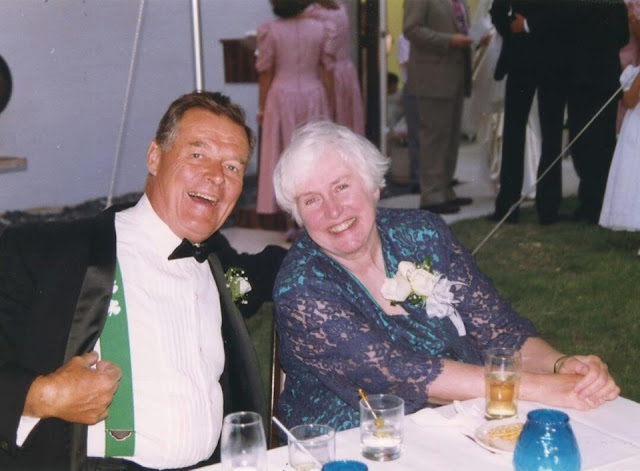