Staging Our House: the Blue Room

I told you in yesterday's post (about what we like to call "the Irish Room") that we have names for all of the bedrooms in our NH house, which we are in the process of selling after 26 years.

The smallest of the four bedrooms was originally occupied by sons #3 and 4 after we first moved into the house.  There was really only enough space in there for a bunk bed and a dresser that they shared, and also a little bookshelf filled with books and toys.  But it was cozy and they loved it.

Once son #5 came along and then graduated from sleeping in a port-a-crib by his mom and dad's bedside, we moved his crib into that small bedroom.   Sons #3 and 4 relocated to the big room across the hall where the two oldest boys had been sleeping, and sons #1 and 2 moved into what eventually became "the Irish Room."  (I forgot to tell you yesterday that before it was decorated with a Celtic flair, it was all boy, with shelves packed with trophies and other sports memorabilia--and you could hardly ever see the carpet, because there were usually piles of clothes all over the floor!)  But the switching around wasn't over yet.  Our baby didn't like being the only brother without a roommate, so as soon as he was old enough to sleep in a bed, he moved into "the Triple" with sons #3 and 4 and his little bedroom was from that point forward a dedicated guest room, kept ready for occasional visits from grandparents or other friends and family.

Once it was deemed a guest room, I painted this little bedroom a vivid Wedgewood blue color and we purchased a queen-sized bed for it.  For many years, it had a sponge-painting effect (everybody was sponge-painting in the 90's!) over the blue paint; but not too long ago, I repainted it with what I thought was a more subtle-looking shade of blue.  So here it is, "the Blue Room," before staging to sell. 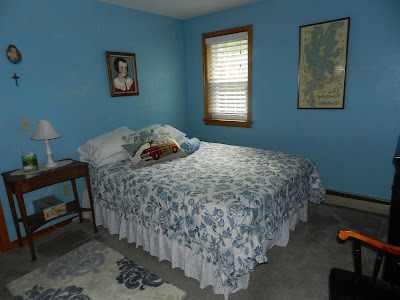 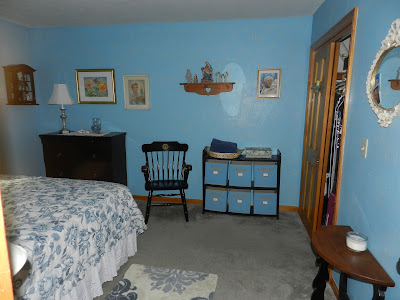 And here's the "After" version, with the new wood laminate floors, a fresh coat of cream-colored paint, and considerably less clutter. 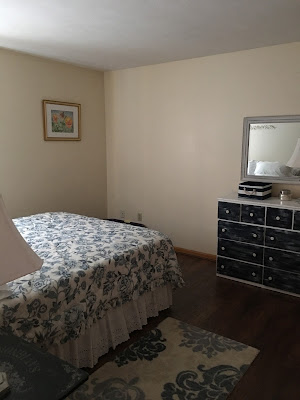 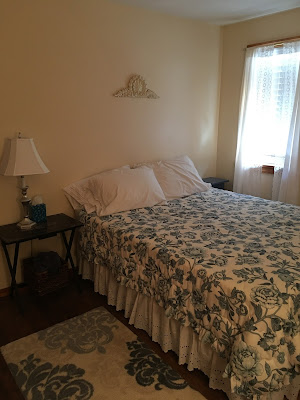 I think making our house--which was once a rather busy, and very colorful, canvas that chronicled our life as a family--into more of a blank slate must have helped the buyers to see its potential and to imagine themselves moving their own things into the rooms.

I have more makeovers to share.  Stay tuned!
Posted by Laura Pearl at 11:44 AM

Email ThisBlogThis!Share to TwitterShare to FacebookShare to Pinterest
Labels: getting ready to sell, home décor, staging your house