Things are Getting a Little Nutty around Here!

Today as I was boxing up some books in my living room (high school and college yearbooks, college text books, and other weighty tomes that my husband and I have probably not cracked open more than once or twice in the quarter of a century-plus that we've lived in this house), I found the oddest thing.

Behind a very old, leather-bound family Bible that was lying horizontally in the bottom corner of one of the built-in bookshelves, there was a pile of almonds. 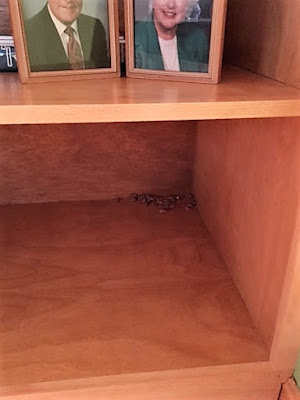 I mean, it's not that my husband and I are opposed to snacking in rooms other than the kitchen.  We do that all the time, often bringing a tray of crackers and cheese into the living room to have while enjoying drinks by the fire, munching on chips and salsa while watching football games, or using our family room as the site for our in-house dinner-and-a-movie dates.  But I was really perplexed trying to figure out how in the world a pile of nuts could make its way to the back corner of the bottom bookshelf!

Then it hit me: there was a squirrel invasion in this house, back in 2011, when I was a fledgling blogger.  I first heard the sneaky critter skittering around in the living room (although I didn't know until later that he was a squirrel and not an axe murderer), and the next day I found a framed picture overturned in there on a table.  Discovering that hidden stash of nuts today made me wonder if before he eventually made his way upstairs, the little scamp had also found an open bowl or container of almonds somewhere and had started squirreling them away behind that Bible!

I have since immortalized my little nighttime intruder in a painting on the wall of the bedroom where I finally got him trapped until the Animal Control guys could come and get him the heck out of my house the next morning. 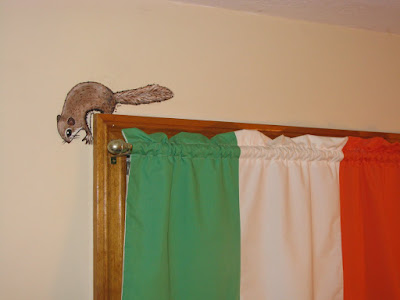 I chronicled this nutty story years ago, here and here.  The posts are long-ish, but they are entertaining, if you've got the time.  (I used to have more words and less pictures in my blog posts; I think perhaps I've gotten a bit lazy as the years have passed!)