Guest Posting at "Footprints on My Heart"

I recently received an e-mail from my young blogging friend Sarah Therese of "Footprints on My Heart."  Her college chaplain (I told you she was young!) recently commented that "Saints have Saints who are friends," and that inspired her to invite her blogging friends to share their stories about their devotion to their favorite saints on her blog.  When I received that e-mail, I was very excited to participate.  If there's one subject I never get tired of, it's the saints and what they can teach us.

It's funny how sometimes you feel an instant connection with one of the saints.  There are obviously no wrong choices among them when it comes to "favorites," or to those of God's elect for whom we feel some sort of special kinship and affection.  The saints all have different strengths--because they were just people first, ordinary human beings who through extraordinary grace and perseverance achieved great heights--and thus they can help us in different ways.  Of course, we should love them all.  But because we're human, we can't help but have our favorites among them.

Recently, my husband and I were visiting with one of our sisters-in-law, and she was talking about her great devotion to St. Joseph, to whom she has prayed unceasingly for her family's various special intentions.  (Me, too, I thought; I love St. Joseph!  I don't think I've ever boarded an airplane without having a St. Joseph prayer card in my purse and taking it out to say the Unfailing Petition to this powerful patron of families during take-off.)  Then we took a little shopping trip to TJ Maxx, and in the jewelry case there were some beautiful holy medals depicting St. Michael.  My sister-in-law commented that she was looking for a St. Michael medal to give to one of her daughters, who just loves the warrior saint.  (Me, too, I thought; I love St. Michael!  My husband and I always say a prayer to him at the conclusion of our daily Rosaries, knowing how powerful he is in fighting the forces of sin and evil in this fallen world of ours.)  Indeed, for every individual and for every individual need, there is a saint.

I have my favorites among them, like everyone.  One special saint friend is St. Therese of Lisieux, whose story spoke to me, touched me, and inspired me.  When I read her autobiography The Story of a Soul many years ago, I felt an instant connection, and she has long been one of my go-to saints when I feel the need for some serious Heavenly aid.  St. Catherine Laboure is another special friend of mine among the saints, because I always wear a Miraculous Medal.  St. Catherine Laboure is the one to whom Mary appeared and gave the design for this medal, and thus she is the one who is responsible for the spread of its devotion.  These two saints ended up sending me an amazing sign of their support at a really crucial time in my life--but that is a story for my next "Footprints on My Heart" post.  Because today, I want to talk about a saint who is not nearly as well-known, a rather obscure young man whose life story jumped out at me from the pages of a rather obscure book and took up residence in my soul.

One day about 12 or 13 years ago, I was flipping through Ann Ball's Faces of Holiness, Modern Saints in Photos and Words (one of the many Catholic works that crowd our shelves), stopping to read the sections that interested me.  This book is filled with short chapters that tell about the lives of different Saints, Blesseds, and Venerables--as well as some people who lived lives of extreme holiness, but whose causes for canonization have not yet begun.  I love to read about modern individuals--average Joes, lay people, married women--who have found the path to sainthood.  It gives me such hope.

It was by reading Faces of Holiness that I first became acquainted with Gianna Molla, who at the time was a Blessed but is now a canonized Saint.  Her story definitely resonated with me.  But I think the whole reason I was drawn to that particular book in the first place was so that I would find Blessed Pier Giorgio Frassati, whose name was completely foreign to me at the time.  I read pages 213-219 (a short synopsis of his heroic life and untimely death), and I was blown away by this handsome young man from Turin, Italy, who died in 1925 but whose body remains incorrupt.  He was for all intents and purposes a "normal" guy: good-looking, fun-loving, athletic; a practical joker who was always surrounded by friends; a student who struggled academically and was a bit of a disappointment to his parents.  He was extremely devout, however, a trait not shared by the rest of his family members, and he was especially devoted to Our Blessed Mother.  He also had a secret life: born into wealth, he gave almost all he had away to the poor (and his family did not even know the extent of his charity until after his death--when it was revealed that unbeknownst to them, there'd been a saint living among them).  I'm not even sure why the combination of photos and words in that book hit me the way they did, but I felt as if I knew him, as strange as that sounds--and I wanted to know more. 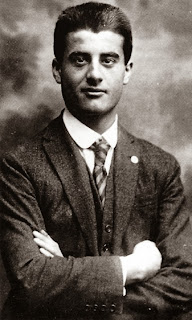 Before long I had ordered and read My Brother Pier Giorgio, His Last Days, a memoir written by his sister Luciana that chronicles his last week on earth--his "passion" and tragic death at 24.  It remains one of the most re-read tomes in my personal library, and if you're interested in reading a review I wrote for this wonderful book, click here.  After that, I got my hands on Luciana's other book, a biography titled A Man of the Beatitudes (which I had my youngest son read in 8th grade when we were homeschooling him; because--like JP II, who named him the Patron of World Youth Day in 2000--I can't think of a better role model for a young man to emulate).  It, too, is well-worth the time.  If you haven't heard of this extraordinary young man, or if you haven't read much about him, I highly recommend these two books.  His life story is utterly fascinating and inspiring, and if you do get to know Pier Giorgio better, I believe there's a very good chance that he will become a special friend of yours among the saints. 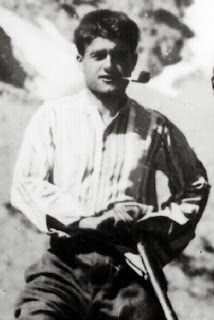 I admire this young man so much that I had to include him in my novel Finding Grace.  My shy little heroine, Grace Kelly, who is determined to achieve the goal of sainthood while living in the world, is "introduced" to Pier Giorgio (I won't tell you how--you'll have to read the book to find out!), and she becomes enchanted with him to the point of having a bit of a crush, even though he's been long dead.  I had to figure out a way to work some Italian immigrant characters into the novel so that there could be a personal connection between them and this saintly Italian boy, because the story is set in the 1970's and my research efforts failed to turn up the titles of any books that Grace could have read at that time to learn about him.  It took some finagling to figure out a way to have her "meet" him, but it was worth it to me.  I was determined that Pier Giorgio Frassati would be one the many saints whose life is an inspiration to Grace as she struggles to find and stay on the path to sainthood.


I can imagine that I, too, might have felt like Grace about him--if at 15 I hadn't yet met the true man of my dreams: the boy who would become my husband, the boy who made crushes on other males forever a thing of the past for me (and the boy who was my main inspiration for the character of Grace's love interest, Tom Buckley).  And I think if more young girls would ignore the Justin Beebers of the world and swoon instead over men like Pier Giorgio Frassati--men of exemplary character, moral fortitude, and deep faith--there would be a lot fewer heartaches.


I have yet to receive any special sign from this special friend of mine, and yet I feel a deep bond.  I urge you to learn more about this holy young man who will one day be numbered among the saints.  (This link is a good start, if you'd like to read about him.) 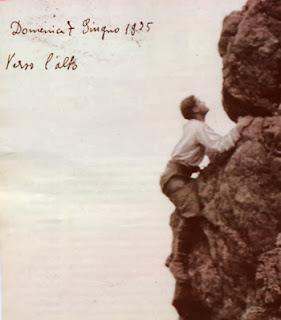 (This guest post appeared over at "Footprints on My Heart" today--thanks, Sarah Therese, for letting me share it with your readers!)