Yesterday was the feast of St. Hedwig.  I didn't realize this until I was sitting with my husband in the pew before Mass started and I opened up my October edition of Magnificat to get prepared.  Here is what Magnificat reports about St. Hedwig (a saint with whom you may be familiar, but with whom I was not, I must admit, before yesterday morning):

Saint Hedwig was born in Bavaria around the year 1174.  She married a prince of Silesia and they had seven children.  She led a most devoted life, looking after the poor and the sick, and founding hospitals for them.  When her husband died, she entered the monastery of Trebnitz and died there in 1243. 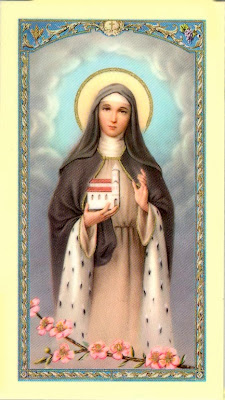 I always like to read about women saints who were married and had lots of children, because it helps me to believe that no matter what your station in life (whether you're living "out in the world" or you're cloistered in a convent), sainthood is indeed achievable.  It helps me to believe that it is possible (not easy, but possible) to be in the world but not of the world--even if you're married to a prince.   Although Hedwig did live the later years of her life--after she was widowed in 1238--as a religious, for the better part of her time on earth her vocation was wife and mother. That's good news for regular folks like you and me who are living ordinary lives while striving to reach that glorious goal. 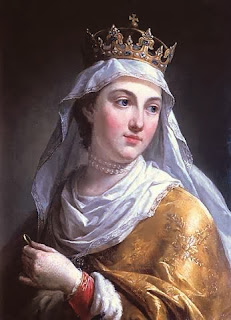 Of course, while raising seven children of her own, St. Hedwig was also founding hospitals for the poor and the sick...which is more than I have ever done or will ever do.  So I may have quite a long way to go before I cross the finish line...

St. Hedwig, pray for me!

Thinking about this saint with her unusual name got me to thinking about Hedy Lamarr, an actress who was known as the "Most Beautiful Woman in Films" during Hollywood's Golden Age, and wondering if Hedwig was perhaps her real name. (I remember my dad telling me that as a young movie-goer in the 40's, he had a boyhood crush on the raven-haired beauty.)   Sure enough, she was christened Hedwig Eva Maria Kiesler when she was born in Vienna, Austria in 1914.* 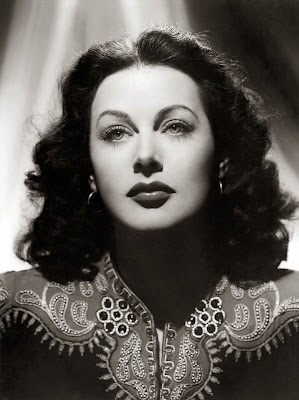 It appears that even when you pick a saint's name for your daughter that isn't all that appealing on the surface (sorry, St. Hedwig--but yours, with its hard edges, isn't very melodious-sounding), you can come up with a nickname that is incredibly cute.  A granddaughter called Hedy?  Bring it on.  [Insert smiley face emoticon here.]