If you frequent this blog much, you know that every now and then on Saturday mornings, I like to go the lazy simple route and give you re-runs of old blog posts.  The one I chose for today is a favorite of mine--because I just LOVE the subject matter.  It was written way back when this blog was but a wee babe, not even three months old yet.  I'm sure not many people saw it when I first posted it, because two years ago I didn't have the enormous readership that I have now (LOL, ROTFL, etc.).

Have a great weekend!  And hopefully this testosterone-filled post will get you in the mood for watching college football (because what else would you possibly want to do on a Saturday?). 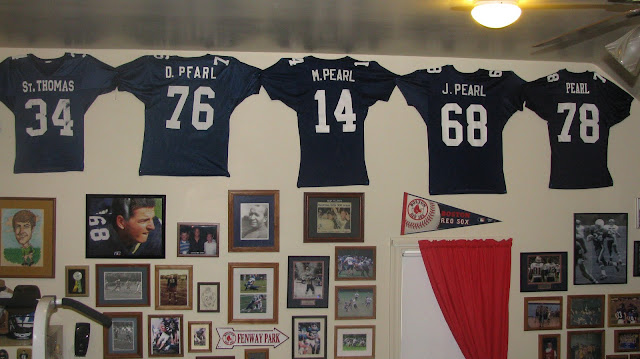 I hijacked the title for this post from the 2001 HBO ten-part mini-series of the same name. That "Band of Brothers" was about the experiences of E Company, or "Easy Company" (part of the 101st Airborne Division), during WWII. "Band of Brothers" was a fantastic mini-series and I highly recommend it; however, this post has nothing to do with war stories, other than the tussling and scrapping of little boys. I just thought it made a great title for today's ruminations about my five tight-knit sons.

A number of years ago, a woman whose son played on the high school football team with several of our boys told me that he'd said to her, "The Pearls are so lucky to have all those brothers! They probably never get bored." In this particular boy's house, it was just he and an older sister. I remember being flooded with warmth and happiness when I heard that comment. My husband and I had always thought that our sons had a unique and special situation: they lived in a world where everyone was interested in the same things, played on sports teams together, and even shared mutual friends from school. I remember thinking that it didn't matter if we weren't the richest people in the world, materially speaking; we had given our boys the greatest gift they could ever get, and that was each other. We used to tell them that they were rich in brothers!

Well, a few nights ago, the same sort of thing happened again. It was downright deja-vu-ish. My youngest son had a buddy from school over, and we were hanging out in our "sports room" (also still known as the "new room," even though it was finished off years ago). Whenever our boys' friends come into this room, they spend a lot of time looking all around: at the many framed pictures of the brothers playing football, basketball, and lacrosse; at the line-up of the five brothers' high school football jerseys that are tacked up on the wall, oldest to youngest; at the row of five varsity letters that hang in order in a line over the coat rack; at the tributes to the various sports teams the brothers follow (Notre Dame and the Red Sox very obviously among them). This boy's eyes were wandering around the room, soaking it all in. And then suddenly he said to my son, "It must have been fun growing up with five brothers."  And my son replied simply, "It was. It was awesome." This friend of his was another boy who had only one older sister. I guess boys who have no brothers always think about how cool it would be if they did (and the same could be said for girls who have no sisters, I'm sure).

I hope my boys will always look back fondly on growing up in a band of brothers. Now that they're men--now that the bickering over video games, fighting over whose turn it is to ride shotgun, and all that sort of childhood nonsense is long past--they truly are the best of friends. What a blessing they are, and have always been, to their father and me! As I mentioned in a previous post, some young mothers used to look at me with horror-filled expressions when they found out that I had only sons (gasp!), and they'd say, "God bless you!" I could never think of a good comeback on the spot; but after the fact, I would realize that what I should have always said in response was this: "He already has!"
Posted by Laura Pearl at 9:49 AM