This is our last day visiting out west with our oldest son and his family, so I'll keep this brief.

Yesterday, our almost-two-year-old twin granddaughters were so hilarious.  They have begun to really PLAY together, chasing one another around the house and making each other laugh like crazy.  For the longest time, they seemed to do what I believe the childhood experts call "parallel playing"--that is, sitting right next to one another, each doing her own thing without paying all that much attention to her sister.  Well, they're paying attention now!  It's delightful watching them become bosom buddies.

Yesterday, they just couldn't seem to go two minutes without touching.  They were wallowing all over each other while sitting on the couch, their limbs intertwined pretzel-style. It was a day of bear hugs, high fives, giggles, and many of those moments parents know well, when it looked like a fun game was going to turn into a tussle followed by tears.  But they just kept laughing.  There was a lot of extreme togetherness going on--and watching them climb all over each other, giving each other love pats that bordered on slaps, nuzzling their heads together (they just couldn't seem to stay separated), I couldn't help but picture the two of them in the womb, sharing that small space and always being in close contact with each other.

The twins were dressed exactly alike yesterday, too, which isn't often the case.  They were wearing matching outfits that I purchased at a clearance sale way back when they were still wearing newborn clothes: denim skirts (from JC Penney, $17.99 marked down to $1.97) and plaid cotton blouses (also from JCP, also $17.99 marked down to $1.97).*  It's usually pretty easy to tell them apart, even though they're identical; but yesterday, we kept mixing them up.  And it didn't help that they were smooshed together for most of the day!

They're awake now, and I hear their cute little mousey voices upstairs, so I'm going to run.  I don't want to waste any of the precious time we have left sitting at my laptop!  I'll just leave you with these pictures snapped during the love fest yesterday. 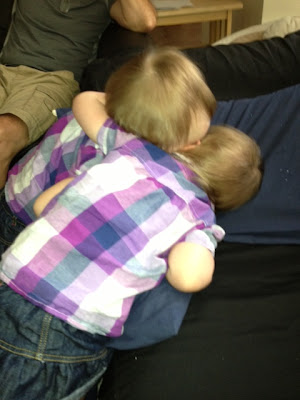 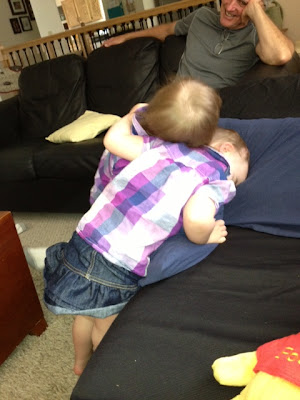 *Yes, I'm a bargain shopper; and yes, I love to brag about the deals I find!
Posted by Laura Pearl at 9:37 AM