I just love Micaela Darr's new link-up on her blog "California to Korea." 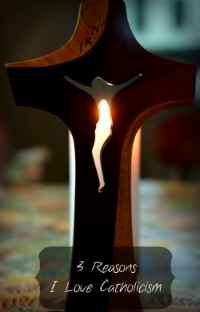 It gives Catholics a place to "rant" (as one follower put it in the "Comments" section after last month's first ever "3 Reasons I Love Catholicism" link-up) about their deep love of the Faith which was founded by Christ Himself.  With all the anti-God/anti-religion ranting that goes on in this day and age, this is the kind of ranting I'd like to see more of!

I'm not only crazy about the subject matter, but I also appreciate the lengthy window of opportunity Micaela gives fellow bloggers to add their posts to hers.  I desperately want to do justice to the beauty of the Catholic Faith, and because I worry I won't be able to, I've been experiencing writer's block this time around.  After all, there are SO MANY reasons to love Catholicism, and so many linkers have already stated a slew of them--and done so in a far more eloquent way than I ever could.  But this link-up is one I feel strongly about supporting, and I've got to stop procrastinating; so here goes.

1. Catholicism is the only religion that recognizes Mary's essential role in salvation history.  It is the only religion that recognizes Her vitally important role as Mediatrix--for through Her, we can grow closer to Our Lord Jesus.  She has the power to intercede for us to Her Son.  He wants us to love Her as He does, and to think of Her as our mother, too. People of other faiths sometimes misunderstand Catholics' relationship with Mary, thinking that we worship Her in the same way that we worship God.  We don't worship Mary; we venerate Her, we are devoted to Her, we love Her; we believe that we are Her beloved children, and that She listens to our prayers.

There is nothing more touching to me than seeing little ones showing their love for the Blessed Virgin Mary.  My oldest son and his wife are teaching their two-year-old twin daughters all about Her.  When they put the twins to bed at night, they remind them to talk to Mary or their guardian angels if they get scared.  When we were out west visiting with them recently, the girls stopped by to say hi to Her on their way out of the church after Mass. 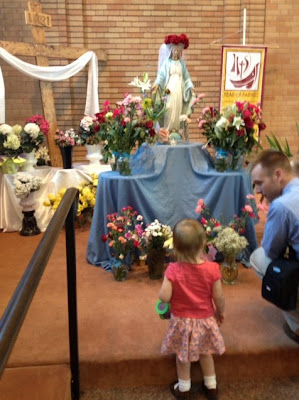 We should all be like small children, who seem to have an instinctive love for the Blessed Virgin Mary.  Back in the early days of my blog, I wrote about our neighbor's little boy, who couldn't pass our garden statue of Mary without stopping to kiss "the Lady."  Although his family was Catholic, they were non-practicing--yet he was inexplicably drawn to that image of the Mother of Our Lord.  (You can read that short post here.)

To me, Marian devotion is one of the most beautiful aspects of Catholicism.  Which leads me to...

2. The Rosary!  My husband and I are convinced of the power of this devotion.  We began to say a daily family Rosary about eighteen years ago, when our oldest son was 11 and our youngest was 2.  At that time, sons #2 and #3 (10 and 9) were going through a phase where they just couldn't seem to get along.  They knew just how to push each other's buttons, and their spats often ended with a punch or a shove.  I had begun to worry that they were never going to get along, and it was very distressing for me--because even though I had five sons and people probably think that means there was one big wrestling match going on at all times, that really wasn't the case.  Considering all the testosterone around here, we had a pretty peaceful house.  I'm like the timid dinosaur in the Disney movie Toy Story--I don't like confrontation!--and I couldn't bear to think that these two boys weren't going to grow up to be friends.

Well, we started praying the Rosary, beginning our special petitions each time by saying "For peace and harmony in our household"; we also put photos of the dueling brothers under our statue of Our Lady of Grace--a practice adopted from my mother-in-law, who would do so when one or the other of her eight children needed special prayers.  Within about three weeks of starting the daily Rosary, my husband and I suddenly realized that our two fighters had stopped fighting.  It seemed nothing short of miraculous to us.  They were acting like best buddies and have been extremely close ever since! 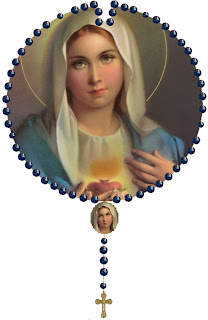 For many years, we were able to keep up this practice--all seven of us, sitting in the living room together.  We would often have what came to be known as our "pre-Rosary talks," where we would sit down to pray and start talking about this 'n that, laughing and storytelling, and then realize that an hour had gone by and we'd better get down to business.  Those talks are the basis of some of my fondest memories of family life--not to mention those Rosaries.  Having all those deep male voices joined together in praying the Rosary was like listening to soothing Gregorian chant...and because it was so comforting and lulling, I often slept through the last few decades (letting the angels finish my Rosary for me).  Once the older boys got into high school and everyone's school and sports schedules became so crazy, it got harder to get the whole crew together at the same time; and unfortunately, the practice of saying the Rosary as a family fell off.  My husband and I still say one together every day, however, and we firmly believe that our family has received many blessings through the intercession of Our Lady.

I just love all the sacramentals associated with Mary: Rosaries, statues, holy cards and pictures, the Miraculous Medal (which I wear always, trusting in the graces Mary promised to those who wear it with confidence). 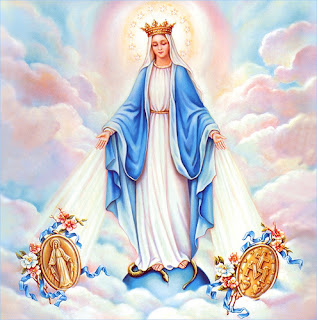 Beautiful religious imagery always touches me so, and that's why one of the reasons I love Catholicism is--

3. The churches.   There is nothing that lifts my soul as much as entering a beautiful Catholic church, where no expense has been spared to glorify God, the Blessed Mother, and the saints through artwork, statuary, and stained glass.  As far as I'm concerned, the more ornately decorated the church is, the better.  Where better to showcase man's God-given artistic talents than in God's house?

I've been in some churches that actually make tears come to my eyes, they are so breathtaking.  Entering them feels like entering the gates of Heaven.  The Basilica of the Sacred Heart on the campus of the University of Notre Dame is one of those tear-inducing churches.  The church where my husband and I were married, in 1980 in Upstate NY, is another.  How blessed we were to be joined in the Sacrament of Holy Matrimony in such a magnificent Catholic church! 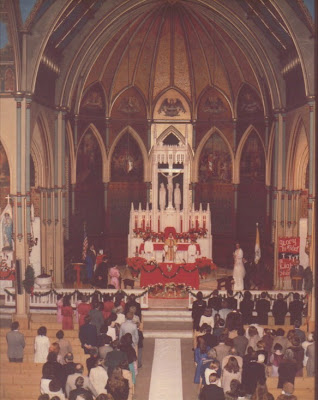 Now head on over to see the reasons Micaela and the rest love Catholicism.  There's so much to love--so much to rant about!
Posted by Laura Pearl at 1:02 PM