Linking up once again with Cari over at Clan Donaldson!  Today's theme: grow.

I don't know if I'm supposed to be showing you plants and flowers and such-like growing things here, but I'm not going to do that, for a couple of reasons: 1--I still haven't raked away last fall's dead stuff in my perennial "gardens" (and I use that term loosely), so the new sprouts popping through wouldn't be shown to their best advantage right now; and 2--I've got just about the brownest thumb on God's green earth.

While I'm not good at growing plant life, I'm okay at growing boys; so I thought I'd offer some visible proof of this skill I've acquired, which was honed through blood, sweat, and tears over the past 30 years.

The youngest of my 5 boys, who was 5 whole years younger than his next oldest brother and was always in a hurry to grow, grow, grow so he could become one of the "big guys," liked to have us measure his height against that of his brothers on a regular basis.

Here are my bookend boys--sons #1 and #5--during one of our frequent measuring sessions back in 2000, when my oldest was 17 and his baby brother was 7. 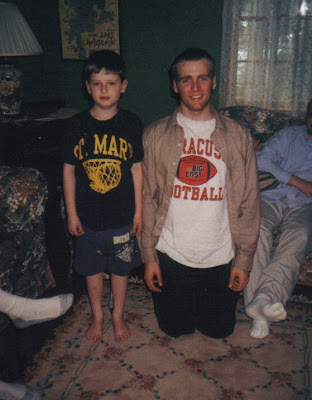 The little guy was happy that he and his big bro were exactly the same height here...sort of. (We let him have his day in the sun.  We figured that eventually, with feeding and watering and time, he might really catch up.)


Here's the same pair of boys almost a decade later, on our oldest son's wedding day in 2009. 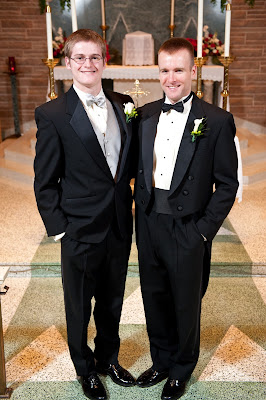 They do grow, you know.  And before you know it, they're all grown up and you wonder where in the world all the years went.  Every mother of grown children chants that same mantra, but that's only because it's so true.

Okay, now head on over to Clan Donaldson to catch some other signs of growth!
Posted by Laura Pearl at 8:34 AM