Well, sports fans, yesterday was indeed a great day for the Irish!  If you are a Notre Dame fan, or even just a fan of college football in general, I don't have to tell you that the Fighting Irish defeated USC last night, finishing their regular season with a perfect 12-0 record.  They are solidly ranked #1 in the nation (much to the dismay of ND-haters, like ESPN's Mark May and his ilk), and they're headed to the national championship game in Miami.  The only question now is who their opponent will be, and that will be decided next week when Alabama plays Georgia.

Mark May promised that if the Irish went 12-0, he'd don the leprechaun suit--and last night, he did just that on national television as legendary Notre Dame coach, Lou Holtz, looked on.  He didn't do it with much enthusiasm, but you've got to give May credit for keeping his word. 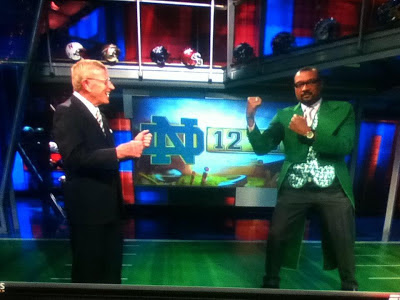 Now we'll have to see if sports columnist Rick Riley will honor his pledge.  He said that if Notre Dame beat USC last night (which he was absolutely sure they wouldn't), he'd polish all of their golden helmets.


It's been a long time since the Irish have been national champs--since 1988, to be exact, under Holtz--and Notre Dame fans across the US are jubilant, to put it mildly.  Last night after the game, our youngest son sent us a text that read, "Destination: Miami; ETA: January 7."  I guess, since he has a January birthday anyway, we know what we'll be getting him for a gift this year.  And my husband and I have decided to give each other the same gift for Christmas as well.  I think a whole lot of Pearls are busy reserving blocks of hotel rooms and putting in their ticket orders, so things are going to be hopping down there at Sun Life Stadium!

And for all those college football talking heads who've been asking for years, "Is Notre Dame relevant anymore?"...I think now they've got their answer!
Posted by Laura Pearl at 11:09 PM