The Pot of Gold 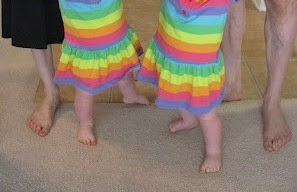 Cutie/Kewpie and Bonny Babe, cruising the house with the help of Mommy and Papa.

My husband and I are absolutely delighted to be spending some precious time with our adorable twin granddaughters and their parents this week. If there's a greater joy in life than being a grandparent, I don't know what it is. Back in May of 2011, shortly before these girls were born, I did a blog post about grandparenting and I included an old Irish proverb that I just love: "Children are the rainbow of life. Grandchildren are the pot of gold." In these outfits, our little darlings are both!

I've come across several other quotable quotes about the joy of grandparenting, and I thought I'd share them today.

"The idea that no one is perfect is a view most commonly held by people with no grandchildren." ~Doug Larson (And certainly, a view held by people who haven't met my granddaughters.)

"Surely, two of the most satisfying experiences in life must be those of being a grandchild or a grandparent." ~Donald A. Norberg (I hope those two sweeties of ours get as much out of the relationship as we do!)

"On the seventh day, God rested. His grandchildren must have been out of town." ~Gene Perret

"Few things in life are more delightful than grandchildren fighting over your lap." ~Doug Larson (How very, very true!)

"An hour with your grandchildren can make you feel young again. Anything longer than that, and you start to age quickly." ~Gene Perret

"No cowboy was ever faster on the draw than a grandparent pulling a baby picture out of a wallet." ~Author Unknown (That one was for Papa, the "poser," the "Suburban Cowboy"--one of the only guys in our neck of the woods who always wears his trusty cowboy hat.)

"Grandparents are similar to a piece of string--handy to have around and easily wrapped around the fingers of their grandchildren." ~Author Unknown (We are wrapped already. It's a wrap, people.)

"Grandchildren: the only people who can get more out of you than the IRS." ~Gene Perret

And finally, "Grandchildren give us a second chance to do things better because they bring out the best in us." ~Author Unkown (You may have noticed that Author Unknown is a pretty astute guy.)

That last one gets to me, because I think it reflects how many of us parents of grown children feel. The greatest thing that ever happened to me was becoming a mother, and I love my sons to pieces. When they were growing up, I always wanted to be the perfect mother--like Bambi's calm and gentle, soft-spoken mother, I used to tell my husband; but I know sometimes I probably got it all wrong. Grandchildren are sort of a "second chance," and they're the hope of the future, and they provide such pure joy that, as Bill Laurin said, "If I had known that grandchildren were going to be so much fun I would have had them first."

Yes, these granddaughters of ours are indeed our pot of gold at the end of the raibow. Papa and Grammy are wealthy beyond measure. (Let's keep this to ourselves, though. I wouldn't want the IRS to get wind of it.)
Posted by Laura Pearl at 10:29 AM