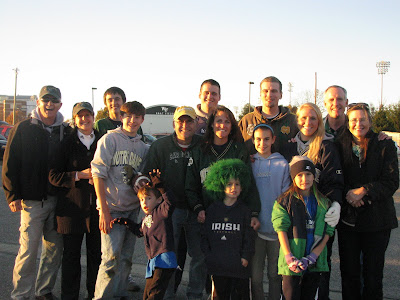 Here is a picture of the Pearl tailgating crew, having a grand old time before the Notre-Dame v. Wake Forest game last night in Winston-Salem, NC. This latest family tailgater was, as always, a big success; and bonus: it was a win for the Irish, too! (Not a blow-out or anything. But we’ll take the W.)

Today, my husband and I are back in VA, spending the night with his older sister, his “Irish Twin,” who traveled to NC for the game, too, along with her fiancee and youngest son—and whose Irish eyes are smiling in the above picture. If you’ve never heard the term “Irish Twins,” it means siblings who are born less than a year apart. This sister is the oldest of the eight kids in my husband’s family, but she has my guy beat by less than a year. He came along when she was three days away from her first birthday; so for three days every year, they are the same age.

This sister-in-law is one of the brightest people you’ll ever meet. As they say in our neck of the woods back home, she’s “wicked smaht.” She is a retired Army colonel with a high-powered job who manages two households (one here in VA and one by the lake in Upstate NY), helps to find plum jobs for family members (two of my grown sons included), designs and executes household renovation projects beautiful enough to be showcased on HGTV (her favorite channel, I think!), and does about a million other things—and does them all well. And she has done all this while raising five of the finest children you’ll ever meet. I don’t know how she’s managed it all with such class, but she has.

Yes, she’s an amazing, competent, accomplished person; but more important to me is that when I began dating her brother thirty-eight years ago, she immediately treated me like a sister. I know how highly she regards her younger brother, her “Irish Twin,” so I am humbled by the fact that she gave me the thumbs up all those years ago. There’s nothing like family—the one you’re born into, and the one you inherit when you get married. Especially if you luck out the way I did, because I really hit the jackpot when I became a Pearl!

Tomorrow, we get on the road again. Next stop: home sweet home!
Posted by Laura Pearl at 7:01 PM