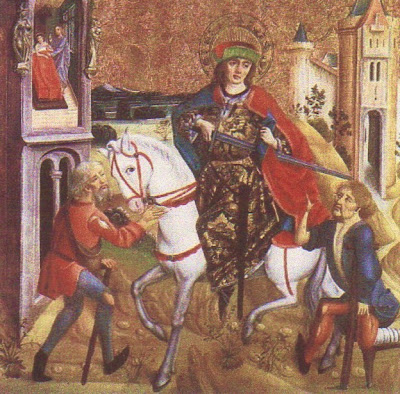 I realized when I woke up today that it is a very special date: it's 11/11/11! It's also Veteran's Day, of course, when we remember all the selfless members of our military, past and present, who have served this country with courage and honor. Veteran's Day began as "Armistice Day" under Woodrow Wilson in 1938, commemorating the anniversary of the World War I Armistice (or truce) that was signed by the Allies and Germans in 1918. There are many members of the military in my own family and in the extended Pearl family, both retired and active duty. I just want to say God bless you all, on this Veteran's Day and always, and thank you for your sacrifices. We are all so proud of you.

Aside from the secular holiday called Veteran's Day, November 11 is also the Catholic Feast of St. Martin, or "Martinmas." St. Martin of Tours was born about 316 A.D. and was the son of a Roman military officer. When he grew up he joined the Roman army. Once, while riding on horseback, he met a starving man begging for alms. Filled with compassion, he tore his red woolen cloak in two with his sword and gave half to the beggar. The next night, he dreamed that he saw Jesus surrounded by angels, wearing the half of his red cloak that he'd given away. Jesus spoke to him in the dream, asking him if he recognized the cloak. Because of this powerful dream, St. Martin came to the realization that he must convert and devote his life to Christ.

When St. Martin was about 20, some Teutons invaded Gaul but were successfully repelled, and Emperor Julian wanted to give Martin a reward for his bravery in battle. The future saint replied, "Up to now, I have served you as a soldier; allow me henceforth to serve Christ...I am a soldier of Christ and it is not lawful for me to fight." Martin was imprisoned as a coward for refusing to fight any longer, but was eventually released during peacetime. After his life as a soldier, he went on to become a member of a Benedictine monastery, a preacher, and then--in spite of his humble protests that he was not the man for the job--the Bishop of Tours. He led an exemplary life, evangelizing and setting up many religious communities; and when he died at age 81, he was so beloved that he became known as "The Glory of Gaul."

St. Martin is usually depicted on horseback, handing half his cloak to a beggar or relinquishing his weapons. His symbol is the goose. He is the patron of beggars, vintners, equestrians, soldiers, tailors, innkeepers, alcoholics, and geese. (I'm sorry--I know so far this has been a very serious post; but geese? I didn't realize that even our friends in the animal kingdom had patron saints!) In England, St. Martin's Feast--which comes at harvest time, before the onset of winter and the penitential season of Advent, when the vintners' wine is ready for drinking--is a celebration of the earth's bounty much like our American Thanksgiving. And instead of a turkey, the main dish is--what else?--a Martinmas goose.

It seems quite fitting that the Feast of St. Martin, the patron saint of soldiers (who was himself a brave warrior for both his country and for Christ), would be celebrated on the same date as Veteran's Day.
Posted by Laura Pearl at 7:11 AM