Dresses for the Twins 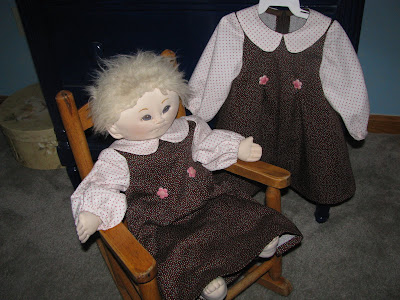 I recently finished making a pair of dresses for the twins and mailed them out yesterday. I am so excited to have little female children for whom to sew! I did make some things for my boys when they were very small: red corduroy Christmas rompers, a tiny blue and white striped seersucker suit, play shorts, Halloween costumes; but there is a very small window of opportunity to make things for boys before they outgrow homesewn attire. Let's just say that I don't think wearing Mom's homemade dungarees, with an elastic waistband and sideseam pockets, would have been too cool. (And the fact that I just called them dungarees instead of jeans is not very cool, either.) But with girls, you can always make dresses, no matter how grown up and sophisticated they--and their wardrobes--become. There are so many opportunities for dresses: First Communion, Christmas dances, and proms, to name just a few. I'm hoping to keep my sewing machine busy for years to come!

I decided to use a doll that belonged to the twins' father to model one of the dresses. Whoa! That didn't sound very good! I better back up here and explain, because trust me, neither my oldest son nor any of his younger brothers was ever into playing with dolls! When my firstborn son was just over a year old (and brother #2 was well on the way), my mother-in-law had this cloth likeness of him made to give to her first grandchild for Christmas. (Technically, it was for him; but let's be honest--we all knew it was really more for me.) She knew a woman who had a little cottage industry creating dolls to look like specific children. So Mom described her grandson: a blue-eyed boy with white blond hair that stuck straight up, Billy Idol-style; and from that description, this doll was born. That Christmas when my boy opened up his present, he briefly hugged the doll (a real "Awwww" moment for the family), but pretty much ignored it from that moment on.

That poor doll was never loved the way it should have been. As the years went by and the number of boys in our household multiplied, it was flung about and mistreated, used as a weapon, and yanked at until there was a rip under one armpit and the stuffing started to come out. For some reason, my boys thought that doll was the most hilarious-looking thing, and it brought out the bully in all of them. When it got ripped, that was the last straw. That was when the doll officially became mine, and I stored it away in a safe place where their grubby little hands couldn't harm it anymore. I waited until they were much older before I dared to bring it out of hiding. Now, this doll sits in a guest room, in a child-sized rocking chair that we've had for almost thirty years, and it is loved beyond measure--because of that baby boy with the sticky-up hair that it resembles, because it can wear real baby clothes that my boys used to wear, because of the loving grandmother who had it made...and simply because I have a huge soft spot for dolls.

And although this doll is supposed to be a boy, I think it looks really cute in a dress--but not nearly as cute as my granddaughters are going to look in them. (Fingers crossed: I hope they fit!)
Posted by Laura Pearl at 7:18 AM