The iMan and His Apps 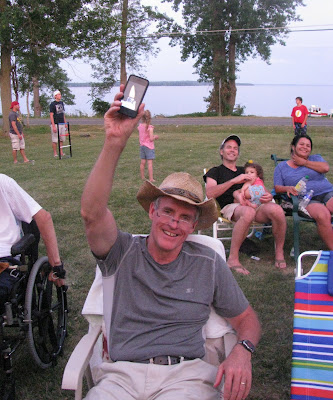 This past weekend at my family's big reunion/camp-out/"Palooza," my younger, very talented brother put on a private concert for us on Saturday night. He set up his speakers and other fancy equipment--I don't know what any of it is called, but lots of wires were involved--on my sister's porch. Then he played his guitar and sang for us as the sun went down, until the bugs became so ferocious that we were driven inside.

Although my brother has a "day job," music has always been his passion. He picked up an acoustic guitar as a teenager and mastered it, without taking a single lesson or ever learning how to read music, and throughout high school he played in a garage band with several buddies. He plays everything by ear--and he can play just about any genre, from hard rock to classic rock to country to Elvis Presley to the Beatles...well, you get my drift. He's also very funny, and he tells jokes and pulls a lot of faces while he's performing. We set up our lawn chairs facing the "stage," in true concert fashion, and yelled requests at him. (I think we were a tougher crowd than the ones he plays for at bars and parties--and we weren't paying him!) It was a blast! How fortunate we are to have someone like him in the family to provide us with free, top-notch entertainment. The weekend was so much fun anyway, but my brother's concert was the icing on the cake.

At one point, my brother was about to begin a set of 70's and 80's tunes, and he said if anyone had a lighter, that would be the time to raise it. Not many people carry lighters these days (smoking doesn't have the widespread acceptance it used to enjoy), and I guess at concerts kids raise their lit-up cell phones instead. Well, my husband--the iMan extraordinaire--was Johnny on the Spot and found a free app for his iPhone (he likes the free ones best) called "iLighter Free," which puts a realistic-looking image of a lighter on your screen. What's really neat, though, is that as you wave your phone, the flame moves, too. If it had been darker when this photo was snapped, it would probably look like this cute cowboy was holding up an actual lighter.

Leave it to my husband to find this app. I make fun of him a little bit, because he loves his iGadgets so much. He is the iMan. But some of the apps you can get for the iPhone and iPad truly are incredibly helpful. My husband is an airline pilot and is constantly traveling, and he used to bring along his laptop; now, he can pack his iPad and he doesn't even have to take it out to go through security. No matter where he goes, he can get just about any information he could ever need using Apple's state-of-the-art technology. He even gets updates on the sports teams he follows, and when he receives this information (the score of the latest Red Sox game, for instance), his iThingy plays the ESPN Sports Center theme song. Isn't that cool?

There are more serious--and seriously helpful--apps, however, than ones that provide sports updates. Because my husband travels to Europe for his job, on any given Sunday he might find himself in a foreign city wondering how to find a Catholic Church so that he can get to Mass. Surprise: there are apps for that! (There are apps for everything!) Two of his favorite free apps are "Catholic Mass Times" and "Church Finder." With these apps, my husband can locate a Catholic Church, get directions to it, and find out what times the Masses are. Before he was the iMan, he always figured out how to get to Mass on Sunday, no matter where in the world he was. But it was much more complicated and involved reading paper maps and talking to concierges at hotels, some of whom don't speaka da English so good. Now, all of that information is literally at his fingertips. He just used these two apps this past Sunday, as a matter of fact, to help two of our sons who were on a cross-country road trip and needed to know where to find the nearest church and its Mass schedule.

Now if only he can find apps that will pay the bills, mow the lawn, do his P90X workouts for him...don't laugh, this technology is probably on the horizon. And when it gets here, I know my iMan will be the first to download it.
Posted by Laura Pearl at 6:55 AM

Email ThisBlogThis!Share to TwitterShare to FacebookShare to Pinterest
Labels: family, misc., my guy