Thoughts on Being an Old-Fashioned Wife 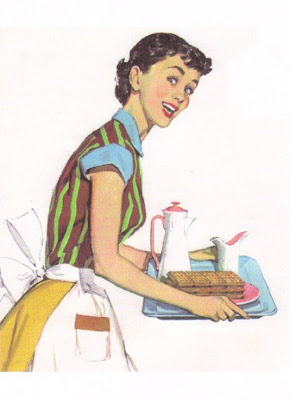 When my best friend from college was about to get married, her mother advised her to do herself up each evening so that when her husband came home from work, she would look good for him. She said that she herself might spend the day looking a bit of a mess, but she always changed into something pretty and put on some make-up before my friend's dad walked in the door at night. (You know, the whole 1950's-June Cleaver-dress and pearls routine.) My friend thought this was downright archaic; women had come so far since those bad old days, after all, and modern men had learned to appreciate a woman for more than her appearance.

Over the years, I've come to believe that my friend's mother was actually very wise, and I do think a woman should try to look good for her husband. After all, most women will dress up, do their hair, and put on make-up for an evening out with their female friends; I think a husband deserves at least as much effort! But I don't necessarily mean only for those times when a wife is going out to dinner with her hubby, or to a big event like a wedding; I mean on a regular basis. I think it's important for a woman to try to look her best, even after she's "snagged" her man.

I don't wear tons of make-up anyway, but I do exactly the same things to my face every day that I do when my husband and I are going out on a "date" or to a party. And I try to dress in a pleasing way, even if I'm just wearing jeans. That's not to say that I've never spent whole days in a bathrobe, or in raggedy work-out attire, because I sure did a lot of that when I was a young mother, and still sometimes do; but for the most part these days, I try to make an effort to look as feminine and pretty (I'm using relative terms here, mind you) as I can. I feel like when I was younger, the bloom of youth did a lot to make up for occasional carelessness regarding my appearance. Now that I'm over 50, I don't have that to fall back on anymore.

I still think of my husband as my boyfriend (my sons are probably sticking their fingers down their throats about now), so I try to present myself to him the way I would if we were still in the courtship stage. At least most of the time.

Email ThisBlogThis!Share to TwitterShare to FacebookShare to Pinterest
Labels: marriage