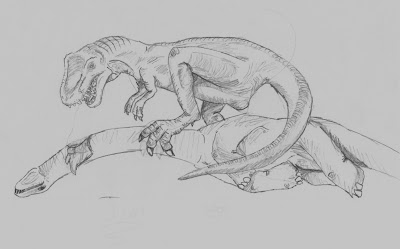 This scene, which looks like something out of a Discovery Channel documentary, was drawn by son #4 when he was 12. He's really captured a moment here, hasn't he? Don't you feel sorry for that poor Brontosaurus? That big old herbivore wouldn't hurt a fly; just give it some leaves and assorted greenery and it's a happy camper. It will fight to the death with Tyrannosaurus Rex to defend itself, using its enormous tail as a weapon; but its big, slow-moving body and rows of short, flat, plant-eating teeth are no match for the likes of the ferocious, carnivorous T-Rex.

It has been estimated that the head of an adult T-Rex was about the size of a small sedan (that's an interesting little factoid I found while preparing for "T-Rex Week")--so imagine the jaws and teeth that went along with that massive head! In 1996, a team of Stanford scientists determined that T-Rex chomped on its prey with anywhere from 1,500 to 3,000 lbs. of force--a force comparable to the bite of a modern alligator. (FYI, in comparison, an adult human can bite with a force of only 175 lbs.)

Some experts believe that rotten, bacteria-infested meat lodged in its numerous, razor-sharp teeth and gave T-Rex a "septic bite," which may have infected and eventually killed its wounded prey. So T-Rex had not only an incredibly strong bite, but most likely a toxic one as well. It seems that most of the dinosaurs on which it preyed stood very little chance against it. Of course, Triceratops had its mighty horns to take jabs at the king, and Stegasaurus had its rows of protective, armor-like plates along its back and its spiked tail for whipping; but once a Tyrannosaurus Rex was able to sink its teeth into its prey, it may have been all over simply because of the toxicity of T-Rex's bite.

The final episode of "T-Rex Week" airs tomorrow.
Posted by Laura Pearl at 6:40 AM

Email ThisBlogThis!Share to TwitterShare to FacebookShare to Pinterest
Labels: art, life with boys