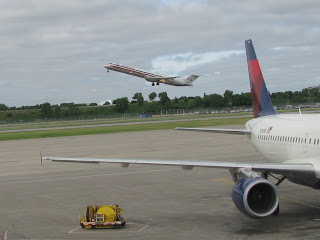 I have never been a fan of airplane travel (as I explained on April 10 in a post titled "Fear of Flying"), and I probably never will be. Flying is too unnatural! I mean, look at this photo that I took at the airport yesterday. The fact that that enormous tube of steel carrying hundreds of passengers and who knows how many tons of cargo can lift up off the ground (where any person in his right mind belongs!) and fly through the sky--that, to me, is the stuff of science fiction. I sometimes feel about flying the way the first readers of Jules Verne's 20,000 Leagues Under the Sea must have felt about undersea travel: "Men flying through the sky like birds? It'll never happen!" I know, I know: there's science involved. There's Bernoulli's Principle, and powerful jet engines, and terms like "lift" and "thrust." The engineers have it all figured out, and by golly, it works! My husband is a pilot, and he can explain it all to me until he's blue in the face, but a part of me is still unconvinced; to me, flying will always be awe-inspiring, scary, and somehow wrong. However, the fact that I can take off early in the morning and touch down by lunchtime in a state that is a 24-hour car drive from home is nothing short of a miracle. And that's pretty swell if you've got two brand new granddaughters halfway across the country that you're dying to see in person. So if you're wondering why I haven't been blogging for a few days, it's because I flew out to see them on Tuesday morning and returned yesterday, something I am aware I never could have done in Jules Verne's day.

I avoided air travel as much as I possibly could when my children were growing up and living at home, but always assured my husband that when they became adults, if they moved far away I would make myself do it in order to see them. I could never stand the idea of flying away from them; but I believed that, if necessary, I would fly to them. Well, that time has arrived, and as much as I dislike being in the air, I have begun to do an awful lot of flying. And I would be a crazy person if I wasn't willing to do it in order to see the two little miracles in the picture below!! (That's one exclamation point for each baby!) Flying, I now realize, is one of man's great innovations, but it's not miraculous; those two baby girls, on the other hand, are truly miracles. A man can make an airplane; but without God's help, he cannot make a baby. 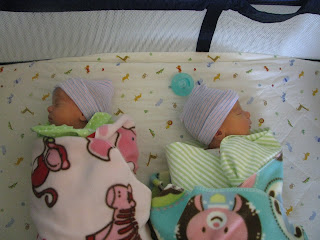 I know I'm not the first person to have grandchildren, and every grandma under the sun probably thinks her little darlings are the cutest to have ever graced our planet; but I have to say, folks, in my case, it happens to be true. (Trust me, I wouldn't lie to you.) These two baby girls, who we now know are identical twins, have such fine little features--you should see their tiny ski jump noses and perfectly formed little rosebud lips!--that they look like little dolls. I am completely besotted, and can hardly wait for my son, their proud daddy, to return from deployment and see his little daughters. (So far, he has only seen them on Skype.) And I can hardly wait for my husband--now a doting "Papa"--to meet them. They are so sweet and adorable, a pair of blessings, angels, miracles. I feel the English language doesn't have enough words that are adequate to describe how amazing those wee sweeties are.

Thank you so much to all of you who have prayed for the twins and their mother throughout the pregnancy. Your prayers undoubtedly helped, as the babies were able to return home just four days after their birth. The two of them are gaining weight and had a great first check-up on Wednesday. Their mommy is still having some issues with pain and some other things, but she's a trooper and is a wonderful mother. She and the babies could use your continued prayers.

Okay, I'm going to end with a movie quote, because it fits so perfectly here. When I saw my precious granddaughters for the first time in person, I was reminded of what the dad in the movie Rudy says when he enters the football stadium at Notre Dame for the first time in his life: "It's the most beautiful sight these eyes have ever seen."
Posted by Laura Pearl at 8:55 AM