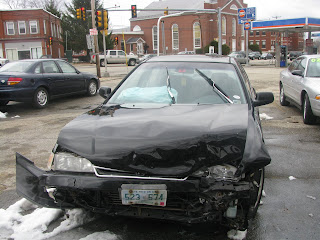 We have a lot to be thankful for this morning.

Last night, on the way back from a meeting, our second oldest son was in a two-car accident. As he was driving down a main road in our town, a minivan shot out from a side street on the right, making a left turn, with almost no time for our son to react. He slammed on the breaks, but it had been snowing all day and the roads were slippery, so he ended up crashing into the other car's driver side rear door. His airbag deployed and he was able to walk away from the crash without injury (except for some painful bruises, mostly on his legs, and we're having those looked at today just to be on the safe side). The man driving the other car, and his two young kids in the back seat, were also unharmed--in fact, our son said their car didn't look too bad either. So thanks be to God, no one was hurt! And a very good friend of our son had been at the meeting with him and was traveling on the same road behind him. When she came upon the accident, she stopped and stayed with him until everything was taken care of, let him use her phone (he always has his phone on him--but wouldn't you know, he had forgotten it at home last night), and then she gave him a ride home.

This was an accident that happened when our son was driving at a relatively low speed through town. I shudder to think of what might have happened to him if he'd been on the highway going much faster.

Our 15-year-old Honda Accord didn't fare too well in the crash, as you can see from the above photo. It was towed to a garage last night, and though we haven't gotten the official word yet, we are pretty sure it's been totaled. It has been a great car for our family, a real workhorse; all five of our boys learned to drive using that car. In recent years, it was driven almost exclusively by our second son. It had well over 200,000 miles on it, and it was his goal to drive it until it reached the 300,000 mile mark. Apparently, that isn't going to work out.

But all we care about is that our boy walked in last night, in one piece. So life is good.
Posted by Laura Pearl at 7:24 AM