Our December 26 Party: Just for the Grown-Ups!

Remember in my last post about our Pearl family Christmas celebration, when I said I'd be back "tomorrow" to tell you all about our awesome day-after-Christmas adults-only party?  That's right, I'm talking about that post I wrote back on December 28, which as you probably realize was not yesterday...so I am a bit late with the sequel, but that's about par for the course these days when it comes to keeping up with this poor old neglected blog of mine!

However, Christmas isn't over yet; officially, we have until the Baptism of Our Lord this coming Sunday to celebrate.  So here it is, the promised sequel (for those of you who even care anymore--and I know who you are!) about a party we had at our house that had nothing to do with squabbles over toys, changing poopy diapers, cleaning up spilled cups of water, and toddlers dancing on coffee tables.  Nothing against parties that include those activities, mind you; but this was going to be all about us big people!  Adult beverages would be consumed!  There would be platters of hors d'oeuvres where the offerings would not be picked over by chubby little fingers and then put back with bite marks on them!  Conversations were going to take place without interruptions! 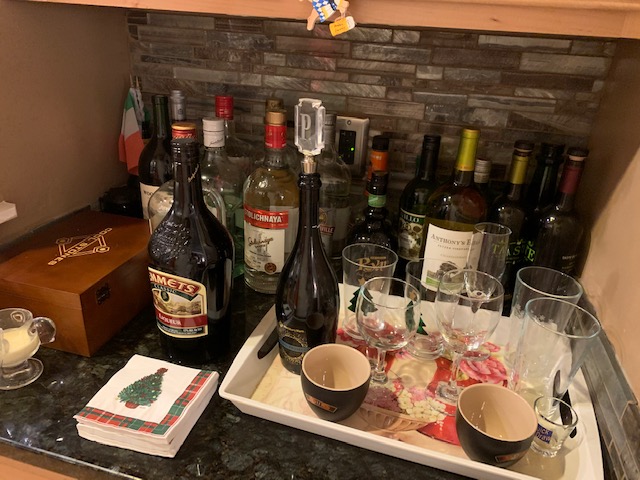 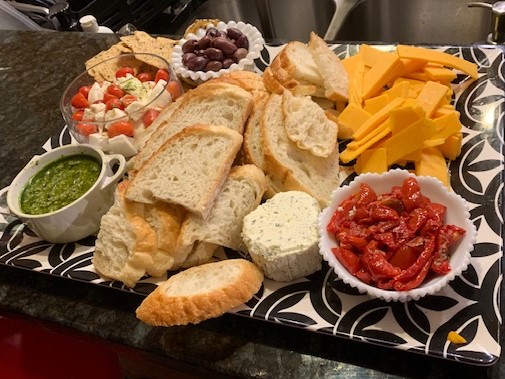 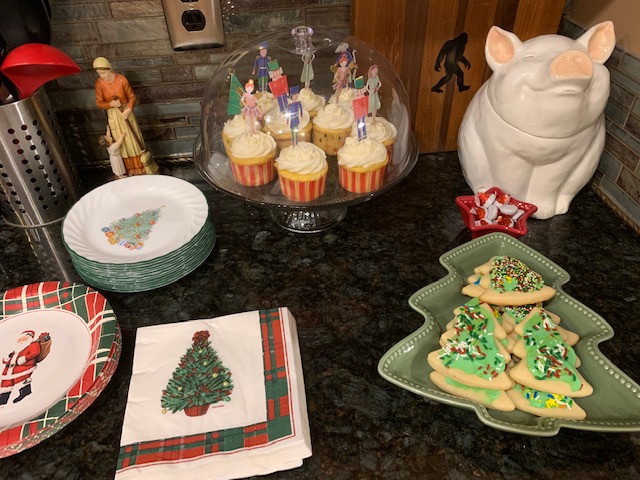 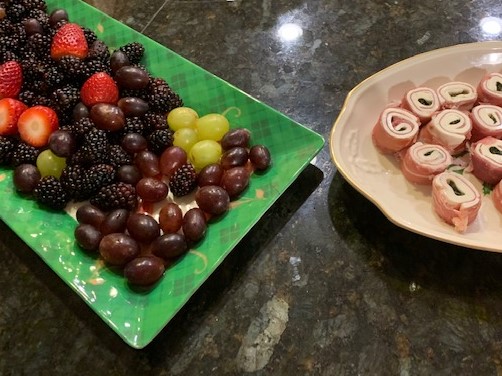 Before you think I sound a bit Grinch-y about the usual chaos that accompanies most of our family parties these days, believe me, I love the craziness.  I really do!  I feel so incredibly blessed to have all 16 of our grandchildren (and their wonderful parents, of course) living close enough to us that getting everyone together fairly often has become part of our normal life in VA.  (Gone are the days when we had to board an airplane or spend a day or two traveling by car to see our precious little people.)  However, we weren't going to fight city hall when one of our boys' wives suggested the idea of having a little bash sans children, with just the adult Pearls (and whatever babies needed to come along with their mamas), and the rest of the overworked young parents enthusiastically got on board and set up babysitters.  I don't usually plan this sort of grown-ups only party, because I know what babysitters charge these days and I don't want to burden our gang with the expense. (I used to make 50 cents an hour watching three small kids, including one in diapers--and that tells you just how much of a dinosaur I am!)  But it was their idea, so no guilt!  My husband and I were just thrilled that they wanted to do this.

Our house was chosen as the party venue, since it is kind of the epicenter for the VA Pearls--which is the reason we chose to move to this particular town, located less than an hour in one direction from one son, about 35 minutes in the opposite direction from two other sons, and a stone's throw from a fourth (who moved here after we did).  When we bought this house, we hoped and dreamed that it would become a central meeting place for everyone.


We were encouraged to dress up like our favorite character from a Christmas movie.  My husband and I, who really aren't dress-up people at all (full disclosure: we've never been huge fans of Halloween), decided to go all-out and get in costume.  I hope you can tell who we are (if not, I'm not sure that we can be friends!).

I'm pretty sure you can figure out who this guy is supposed to be. 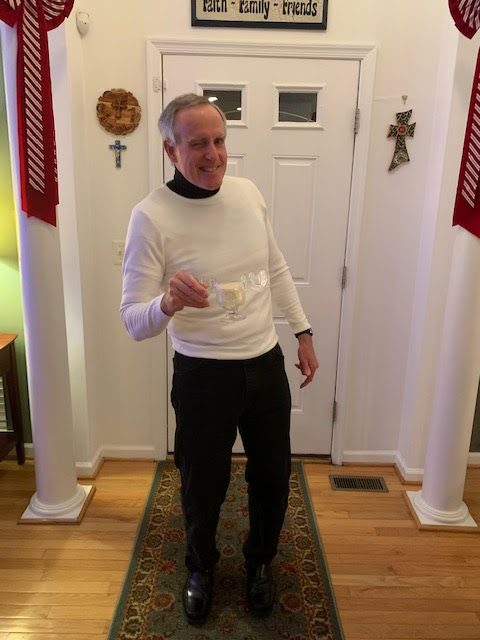 But what about me? 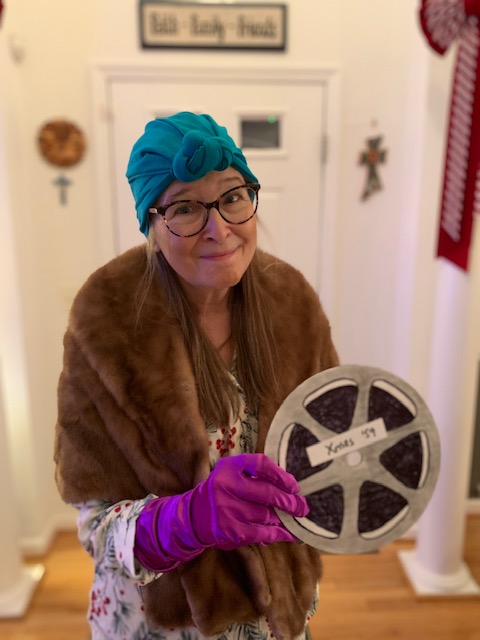 I stumped a few people, who don't know the movie Christmas Vacation as well as we do, I guess.  But I'm Clark Griswold, from that scene where he gets stuck in the attic.  Obviously.  (And I finally found a good use for my paternal grandmother's mink stole!) 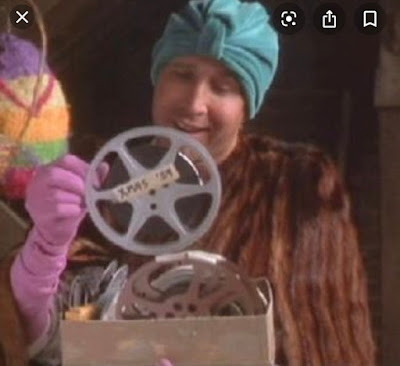 Only one of our sons joined us in the dressing-up department. 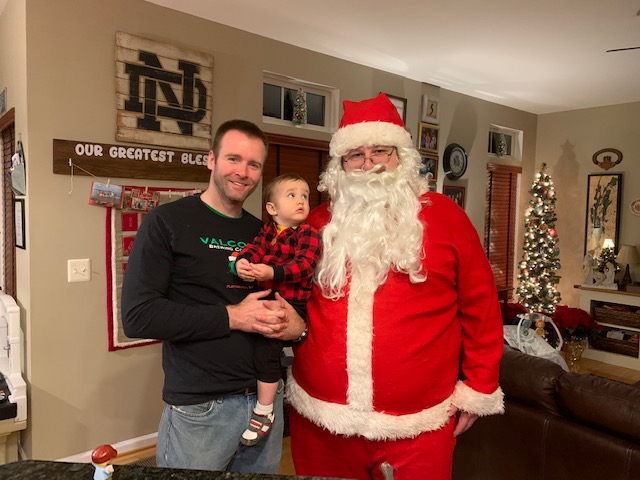 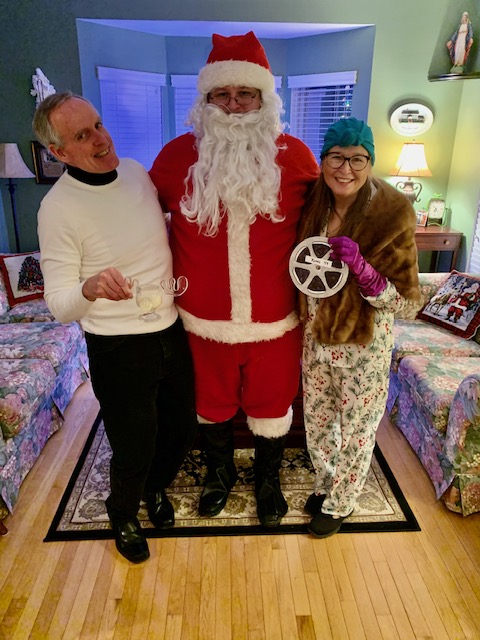 I won the prize for best costume.  Obviously!

The party started about 7:00, and we decided to keep the menu simple with just hors d'oeuvres and desserts.

These two were the last to arrive.  They have 2-year-old triplets and a 2-month-old infant, so they had a good excuse.  It's amazing they were able to get out of the house at all! 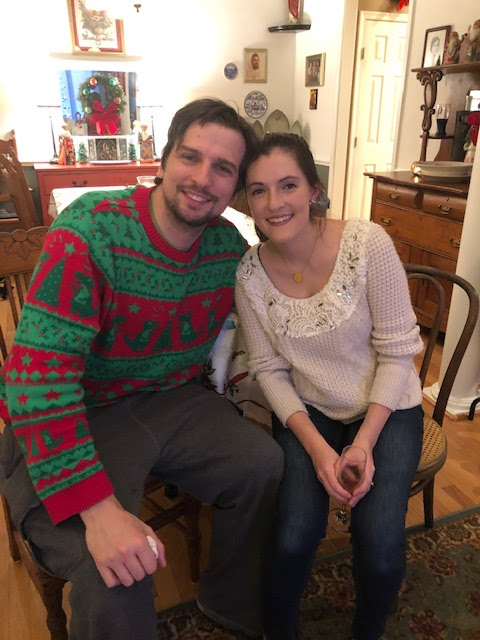 We gathered around the tree in the living room and played a game where everyone took turns telling stories about their favorite Christmas memory, or the funniest thing that had ever happened to them at Christmas.  Three of our daughters-in-law have only been married to our sons for about five years (they all got married within an 11-month span, from Dec. 2013 to Nov. 2014), and we still have much to learn about them and their past lives, so this was actually a great activity.  And it was so much fun! We laughed a lot, especially when one of our daughters-in-law told a hilarious tale about her dad and a Christmas tree (I can't repeat it here, sorry; but suffice it to say that it had us all in stitches).  There was a prize for best story, and she won that one hands-down. 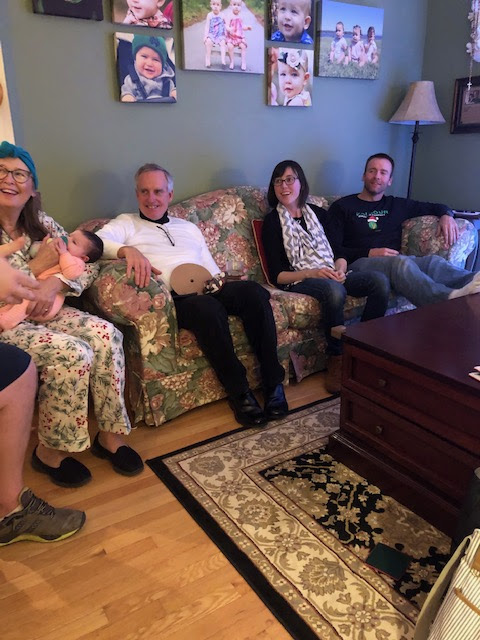 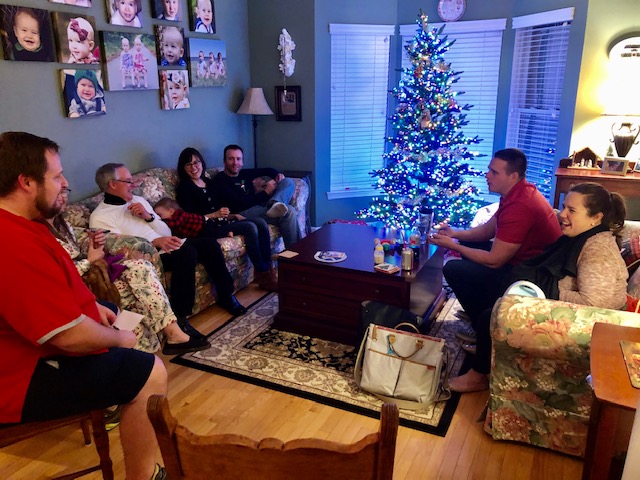 Instead of having a Yankee Swap, which we've done several times in the past, we did a "Favorite Things" gift exchange, which is a tradition in one of our daughters-in-law's family.  There were five couples, so each individual chose four favorite things with a value of $5-7 to give away.  We brought our items in gift bags, so we could easily take one out and show everyone and explain why this particular thing was a favorite before distributing them. At the end, each couple went home with eight new items.  It was fun to hear the explanations for the choices and to see the variety of items.  For instance, one daughter-in-law brought four bottles of red wine called "WELL REaD."  Her explanation for that choice was that she loved books and reading (she used to be a librarian), and as a mother of five she sometimes she needs a little wine at the end of the day!  My husband gave out "cocktail hour" bags, with a bottle of Mike's Hard Lemonade, a block of cheddar cheese, and a box of his favorite crackers inside.  There were phone chargers, coffee mugs, travel mugs, chocolates.  There were even personalized ornaments hand-painted by our second-oldest son.The whole thing was just delightful. 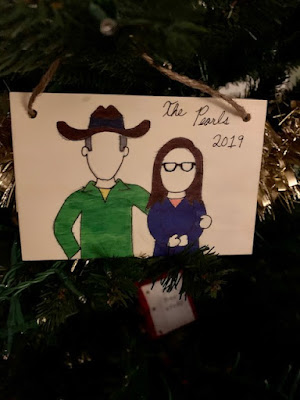 It was agreed that we MUST try to do this sort of thing more often.  I only wish that our youngest son and his wife could have been with us, but they were out in MI this Christmas with her folks.  Next year, though!  I think we have decided that this adults-only party must happen every Christmas season from now on!

It has been the most blessed Christmas for us, filled with so much love and laughter. I wish we had a better picture than these blurry selfies taken with a timer to mark our first ever Christmas party just for the grown-ups here in VA. 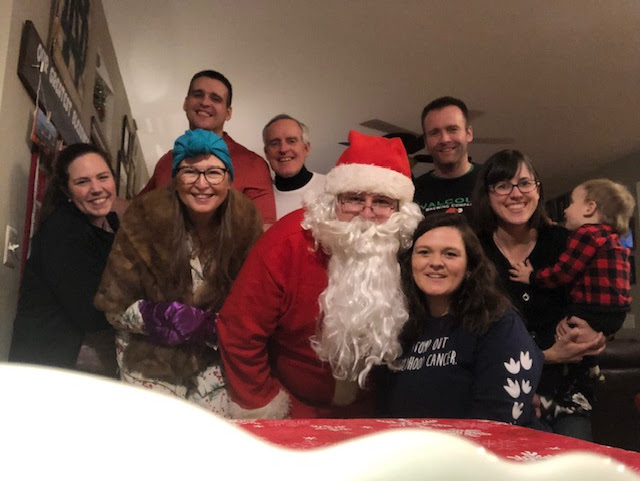 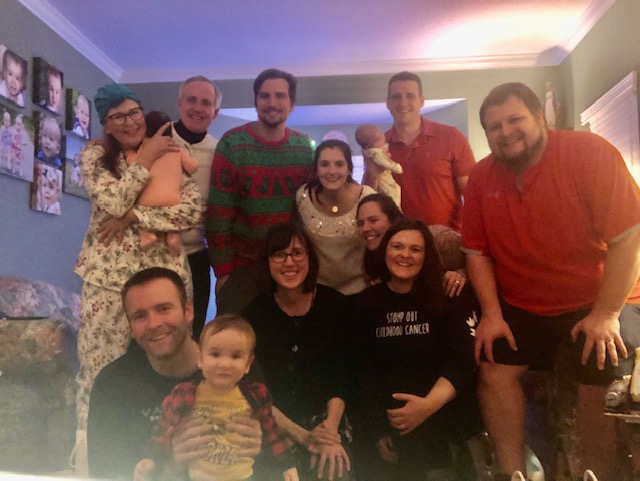 But these shall have to do!  Merry Christmas from this crazy crew.  And God bless us, everyone.
Posted by Laura Pearl at 12:52 PM