My 2019 Mother's Day celebration was actually last Sunday, when the four boys who live near us in VA gave me an early Mother's Day present: they came over for the afternoon and stayed to have a nice dinner in the dining room with their dad and me.  They didn't bring their wives (whom we totally adore, mind you) or their combined 14 precious offspring (who have stolen Papa and Grammy's hearts utterly and completely); they came alone. 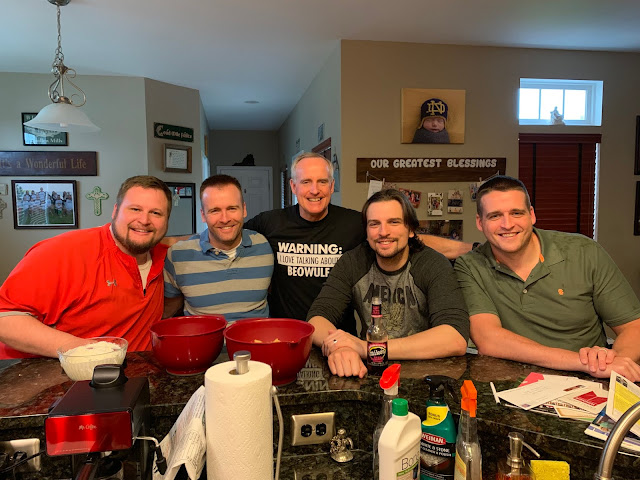 Normally, our special family events or holiday parties at our new modest-sized, open-concept abode in our little cookie cutter neighborhood are rather loud, crowded, and chaotic affairs--but in the best way.  There are little people everywhere, and parents chasing after toddlers, and tussles over toys to break up; there are cartoons blaring away on the TV's, and juice cups to be refilled, and poopy diapers to be changed...it is so, so much fun, and kind of hilarious, with never a dull moment; but as you can imagine, these sorts of gatherings do not provide an atmosphere that is conducive to sustained conversations between adults.

Two years ago, son #2's wife suggested to him that it might be a treat for me to have just my boys over for a few hours, for a change of pace; so he called the two other brothers who were living here at the time and made it happen the Sunday after Mother's Day.  And I have to say...it was so wonderful!  Son #3 brought his 2-year-old boy, G-Man, with him.  (We joked that G-Man could play the part of our absent #5 son, while my husband filled in for son #1, and therefore it would feel like old times, because there would be five boys sitting at my table once again).

I enjoyed that sweet afternoon so much, and I told my husband that would be the perfect Mother's Day present every year: just a few hours with my boys, reliving my glory days as a mother when my whole existence revolved around taking care of them and getting to see them interact in their inimitable way.  Hearing their deep, pleasing voices as they talk and laugh together is one of the things I miss most now that we're in the empty-nesting years.  I can honestly say that they are pretty much my five favorite people on earth, after their dad of course.  And it's not that they don't ever get to talk when their families are around.  But when they're here on their own, it's definitely different.  They are so relaxed.  And they're so smart and clever and sharp-witted--they make their mom and dad laugh til our bellies hurt. 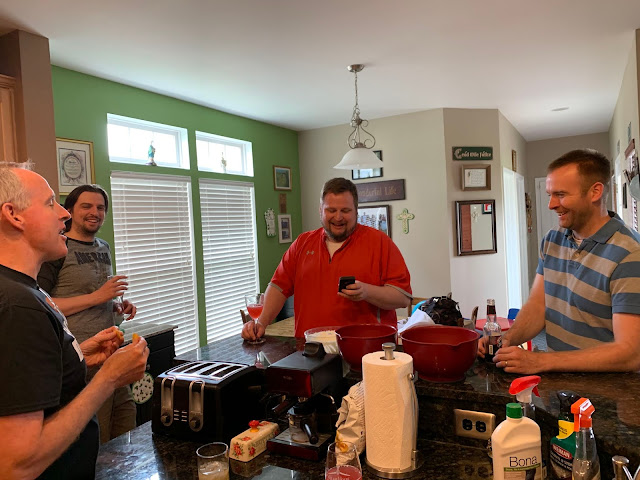 Last year we were out of town, so the boys-only Mother's Day didn't happen.  But I'm so glad it happened again this year--thanks to my hubby, who sent out the first text and got the ball rolling.  As a mother of all grown children (aged 35, 34, 33, 31, and 26), I cannot recommend this sort of thing highly enough.  I never would have thought to ask for it on my own, because I would have worried that my girls would take it as a hint that I didn't like having them around.  (Which is so far from the truth!)  And of course, if our boys were living all over the country, I would never have wanted them to fly or make long drives just to do this for me.  But the fact that they all live less than an hour away from us here in VA made it something they could do. And I appreciate it more than I can say!  Because sometimes--even though the last thing I would ever want to do is to go back in time, because look at all we'd be missing if that happened!--it's fun to get a little feeling of deja vu, of what it was like when it was just my husband, our boys, and me, sharing a house and a life.  It's such a precious time in your life, mamas, when your children all live under your roof.  Cherish every moment, because those years really do fly by.

One of my husband's sisters married a guy who was the youngest of five boys.  When she first got engaged, I only had four of them, and I vividly remember thinking, "I would love to be able to say that I was the mother of five boys!"  God was surely listening; I got pregnant with son #5 very shortly after that.  This sister-in-law now has five children of her own, including triplets.  She told me years ago that she encourages her husband to fly home to see his folks on his own sometimes.  "When we're all with you, you pay more attention to us; I want you to pay attention to your mom!" she tells him.  She said she hopes that when her children are all grown and married, they will sometimes come home alone to visit with her.  This was a bit of a revelation to me, that a mother might ask for this.  And like I said, I probably wouldn't have done it on my own.  But boy, I can attest to the fact that it's a very special thing, having your chicks back in the nest together, even just for a few hours.

The only one missing from our little Party of Five was son #5, who is currently stationed in Oklahoma.  But not to worry: he joined in on the banter with his older brothers via FaceTime. 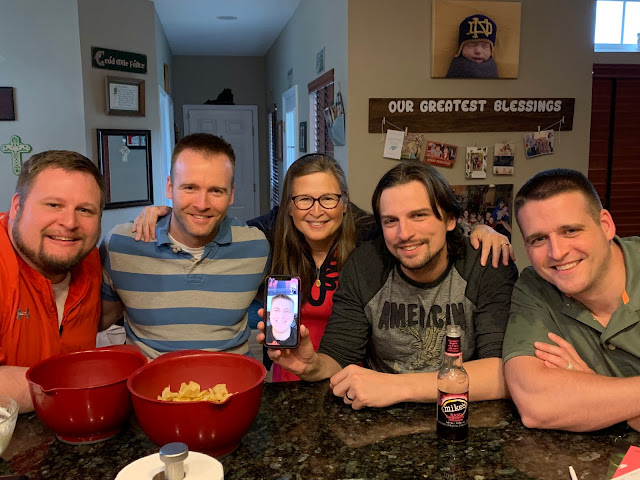 After an enjoyable stretch of pre-dinner drinks and snacks and lively conversations about sometimes funny (movie lines, anyone?) and other times serious (the morality of driverless cars that are programmed to make decisions for humans) subjects, we sat down in the dining room to have a nice steak dinner.  Meat and potatoes are always a win with a houseful of boys, so no need to get any fancier than that. 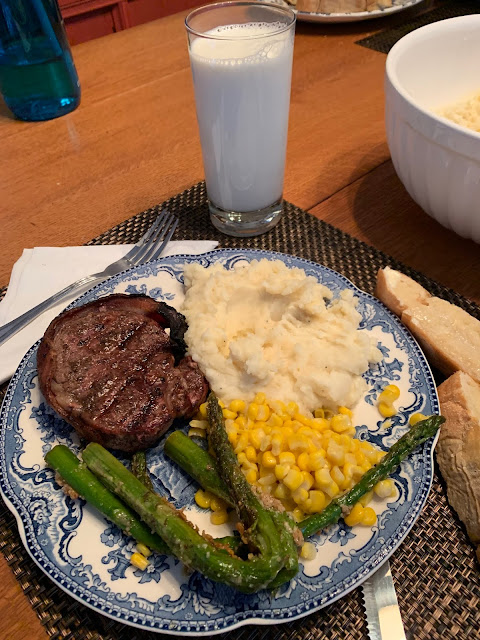 I have always loved family meals eaten in the dining room, and lingering at the table long after everyone's plates are empty.  So my boys gave me the best gift they could ever give me by sitting around the table, talking and laughing with their mom and dad and letting the dishes wait.

I was on a bit of a cloud.  I insisted on getting pictures of each side of the table. 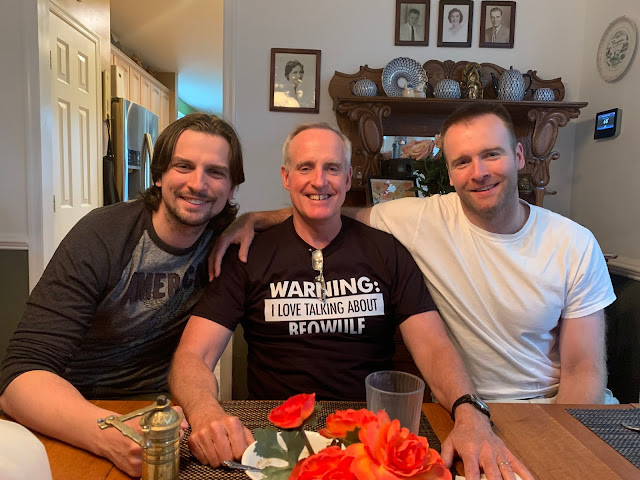 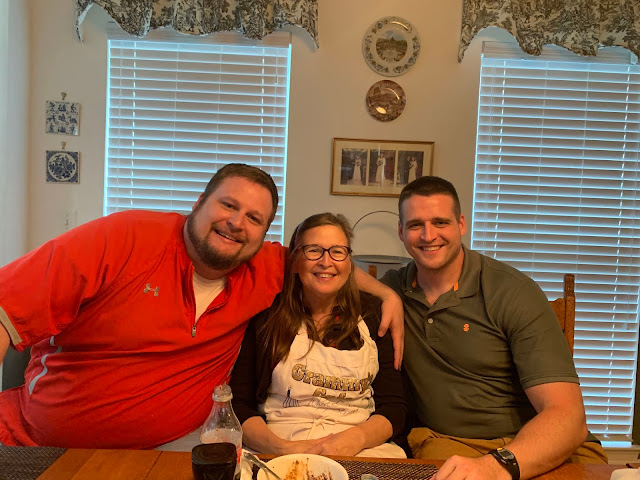 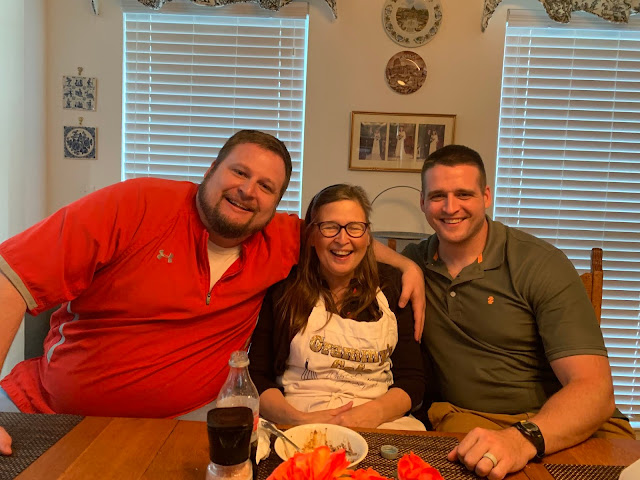 Unfortunately, I forgot to remove my apron for those photos.  But that just gave them one more reason to tease me.  And teasing is their love language, so as far as I'm concerned they can make fun of their mom as much as they want.  (Our side was not the "cool kids" section of the table, I was informed. LOL)

I cannot even express how much I love these boys.  Being a mother was the only thing that I ever wanted in life--and I got that, times five.  Then those five brought me four and now going-on-five beautiful girls to love, too.  And then being a grandmother (to 14 and counting)--that's the icing on the cake.  It's almost too much to bear, and I certainly don't deserve all these blessings.  But I am deeply grateful that God gave them to me, and I don't take them for granted.

My boys brought some Mother's Day gifts.  But the real present for me was their presence.  That was all I need to make it the best Mother's Day ever. 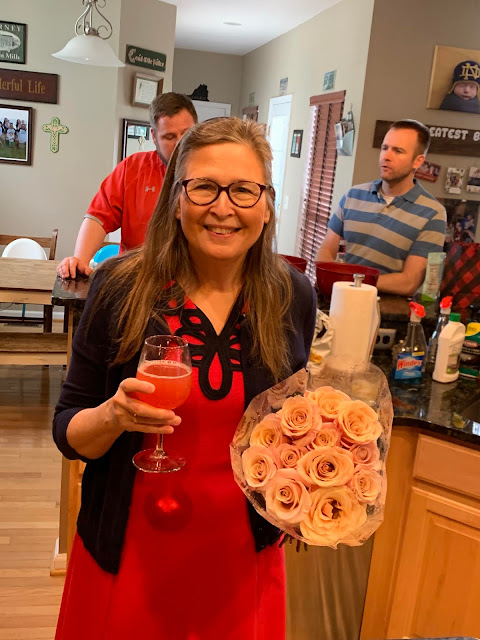 I recently read that during pregnancy, cells from the fetus cross the placenta and enter the mother's body, where they can become part of her tissues.  This cellular invasion means that mothers actually carry genetic material from their children's bodies, a phenomenon called microchimera.  It's no wonder that mothers often say they feel like their children are still a part of them after they've given birth; apparently, that is literally true.  Regardless of this amazing phenomenon heretofore unknown to me, I've always known one thing for a fact: I was my boys' first home--they lived in me once!--and for that privilege, I will be eternally grateful.

I'm going to end this with one of my favorite reflections about motherhood, a famous quote from Cardinal Mindszenty:


The most important person on earth is a Mother.
She cannot claim the honor of having built Notre Dame Cathedral.
She need not.
She has built something more magnificent than any cathedral--
a tiny dwelling for an immortal soul,
the tiny perfection of her child's body.
The angels have not been blessed with such a grace.
They cannot share in God's creative miracle to bring new saints to Heaven.
Only a human mother can.
Mothers are closer to God the Creator than any other creature;
God joins forces with mothers in performing this act of creation.
What on God's good earth is more glorious than this: to be a mother?

On that note--Happy Mother's Day, dear readers!
Posted by Laura Pearl at 10:38 AM

Email ThisBlogThis!Share to TwitterShare to FacebookShare to Pinterest
Labels: life with boys, motherhood