In my  post yesterday, I mentioned that my husband and I had flown out to Detroit to meet up with our youngest son and his girlfriend, and hinted that maybe there was more to that story than just a simple visit...well, that's because it was not exactly a run-of-the-mill weekend.   At all.

Our boy, who is currently stationed in OK, was flying out to MI to meet up with his girlfriend of more than two years, who currently lives in St. Louis (and whom he met on CatholicMatch.com, the "family website" as we like to call it), at her sister's place in the Ann Arbor area.  TO PROPOSE!   He figured he could play the whole "we're just getting together for a fun St. Patty's Day weekend with your sister in a crazy college town" angle, and he might be able to take her by surprise.  He wanted his dad and me to fly out there, and her folks to drive there, too, from their home about four hours away, so that both sets of parents could be present to witness the big moment...

I might as well let these pictures do the talking for me! 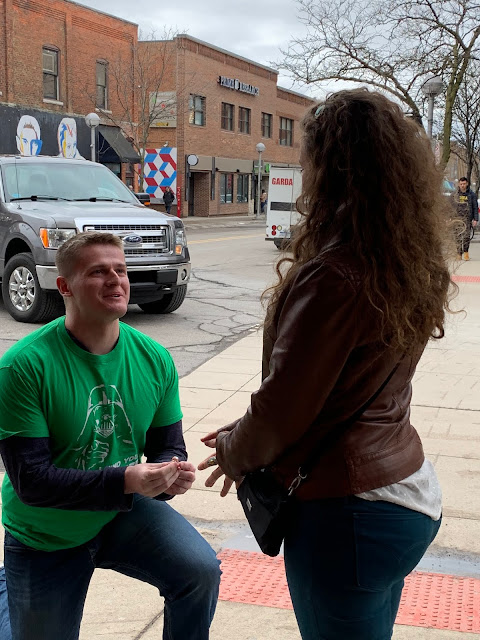 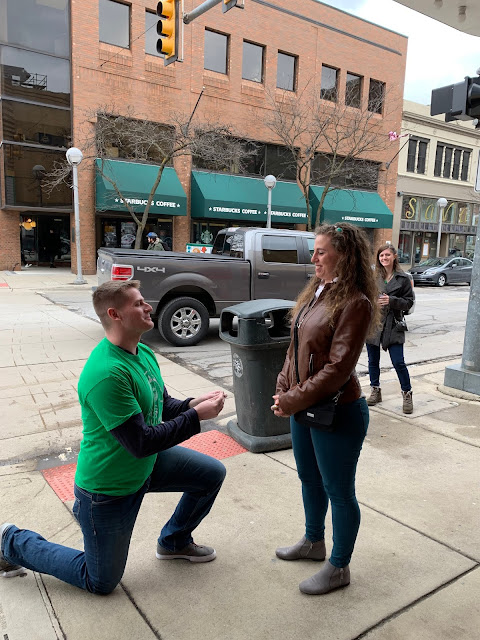 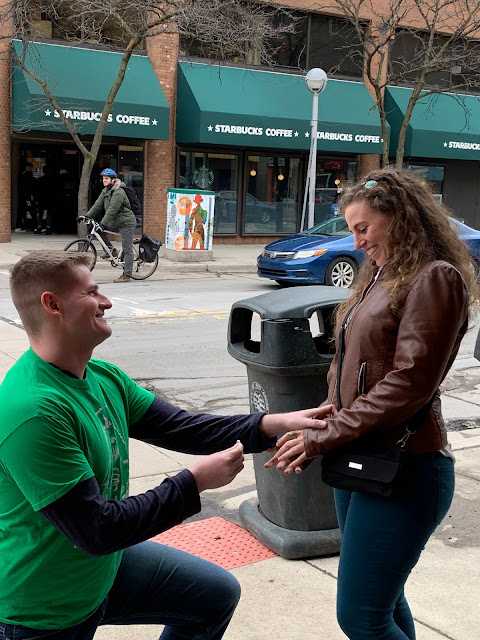 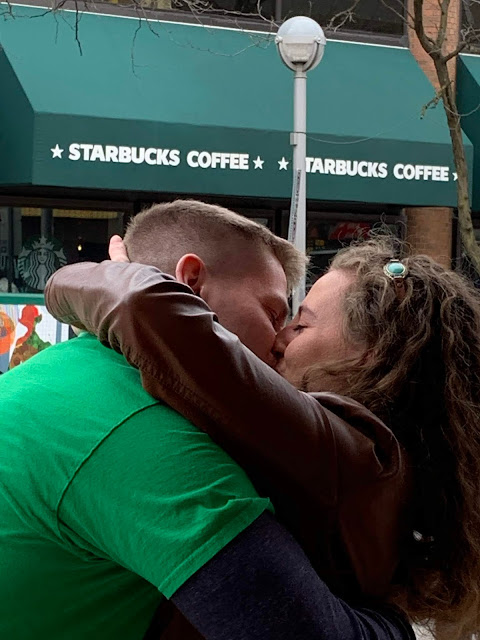 The two sets of parents were told to meet under the marquee of an historic old downtown theater, and to be there out front waiting when our son, his girlfriend, his girlfriend's sister, and one of her good friends came out of the restaurant across the street where they'd just had lunch together.

The surprise worked--she really didn't know this was going to be the day--even though she has been semi-expecting it every time they've gotten together since he returned stateside from his three-year stint in Germany.  (The amazing thing is that it went off without a hitch, in spite of several people--myself included--almost totally giving it away ahead of time!  There's another story for you...but I don't want to get into that here in this happy post!)

My daughter-in-law Ginger asked us yesterday if that theater had any special significance; the answer is not really and sort of.  Our son and his future sister-in-law were just trying to pick a landmark that would be easy for the two sets of parents to find, in a city where she hadn't been living that long and that he didn't know at all.  But I love that that's where it happened, because he is one of the most enthusiastic movie buffs of all time. (There is a link to his blog, The Layman's Movie Corner, up there on the sidebar if you want to check it out and see what I mean!) 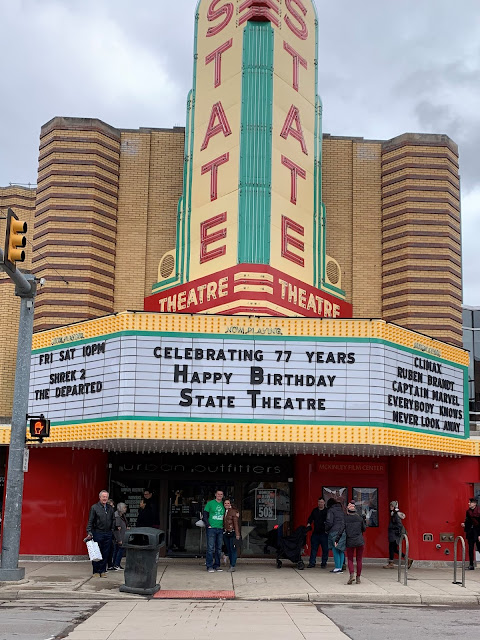 The neat thing about having it happen on a busy downtown street was that right as our boy got down on his knee, a passing car honked its horn like crazy.  It was so fun!

Another plus was that the bride-to-be's good friend is a professional photographer, so she took lots of great shots while it was happening.  And then she made this wonderful image using photoshop. 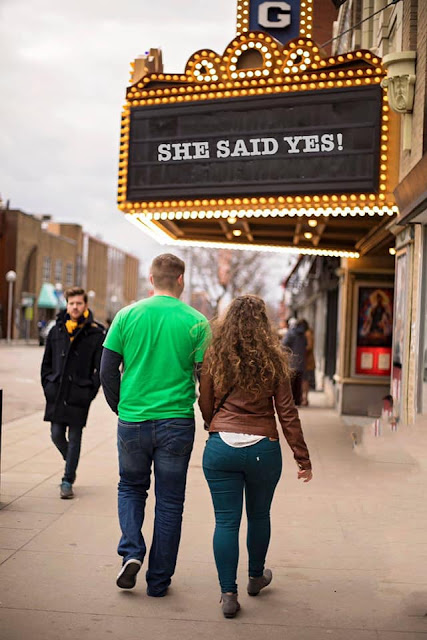 Our daughter-in-law Preciosa made the happy couple a framed sign commemorating the event, using an Etsy download, which they held up for many of the photos.  She also designed and crafted two special t-shirts for her future sister-in-law.  Here's my favorite. 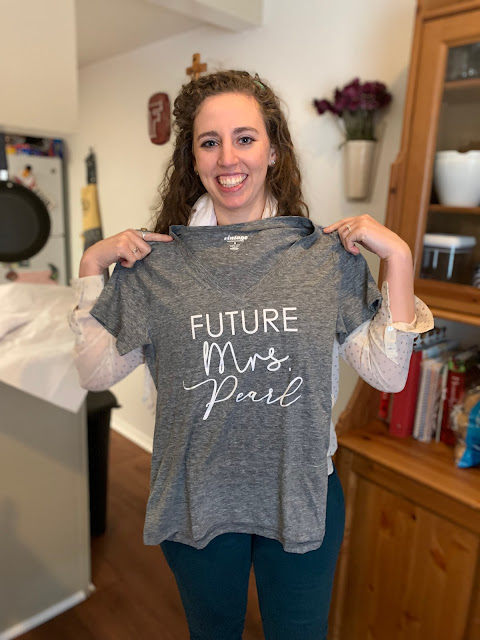 So the Pearl boys are four for four with Catholic Match. That's quite a success rate, isn't it?  (And the fifth couple, son #2 and Ginger, met when they were both members of the wedding party of son #3 and Preciosa!  So that's practically five for five?)

When we sent out the word on the family text stream that includes all the boys and their spouses--saying "They're engaged!"--this is the reply we got from son #4. 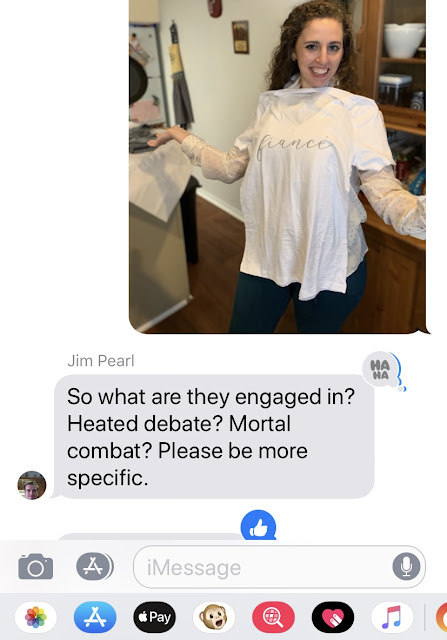 I love my boys!  They make me seriously LOL on the daily.  They tease each other mercilessly (it is their "love language," if you will), and I think our baby might even have been slightly disappointed if his big news hadn't elicited at least a few ridiculous comments like this one from his older brothers.

I don't know if my heart can take all the excitement!  First this beautiful proposal on Saturday--seeing our baby boy happier than he has ever been and imagining the beautiful life ahead of him with his Babisiu (that's her blog handle, I think); and then almost immediately afterward, a long-awaited trip to Rome!  (We leave tomorrow!)   I feel like I'm living la bella vita, truly I do.

I will be sure to share pictures of our Italian adventure when I can.  In the meantime--

Dio ti benedica.
Posted by Laura Pearl at 10:36 AM