I'm on a roll here--back at the blog for the second day in a row!  (Shake and bake!  That. Just. Happened!)

I'm sitting in our home office at my desk, getting ready to break out the colored pencils and work on the ABC Book that I'm hoping to have ready for my grandkids in time for Christmas--you know, the same book that started out as a project for my youngest son, the 25-year-old Army lieutenant who is just a tad too old now to appreciate it the way he would have if I'd actually finished it while he was still in diapers.

But better late than never, I always say!  And I've made so much progress on it this year.  I've now finished the illustrations (two pages for each letter--except for X, Y, and Z, which will be condensed into a two-page spread) for A through I, as well as L and M, P through U, and Z.  One of the J pages and one of the W pages have also been completed.  Several pages of drawings are currently works in progress, but right now there are 37 finished pages out of a planned 48, with three others very close to completion.  I can see the proverbial light at the end of the tunnel!!

When I started this book back in 1993, I was using very large art paper and hand-lettering the text.  I also had three pages of illustrations planned for each letter--biting off way, way more than I could chew, as it were.  That was too ambitious a project for a mother raising five active boys (at least it was for this particular mother, who was never very good at juggling a lot of balls at once).  I only completed 10 pages before I shelved the project until 2013, when I realized it might be fun to dust it off and finish it for my grandkids.

This time around, I decided to use 8 and 1/2 by 11-inch card stock, cut back to only two pages per letter, and print the text on the computer using Word.  Initially, I painstakingly recreated the illustrations I wanted to use over again, making them smaller to fit the new page size; but I have since decided to photocopy some of my original artwork wherever possible, in order to make sure that I actually finish this book before I become a great-grandmother.

Some of the illustrations I did for the 1993 version didn't make the cut.  This one, for instance. 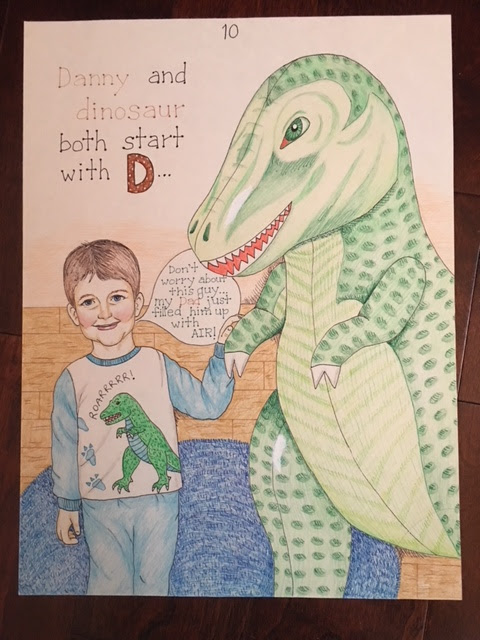 It was inspired by a photo I had of son #2 when he was about four or five, wearing his dinosaur jammies and standing next to a giant inflatable T-Rex he'd gotten as a Christmas gift.  I would have used it again for the new book, but when I decided to do two pages per letter rather than three, I had to come up with new rhymes and this illustration didn't fit as well.  (This boy of ours now has a mini-me of his own, a junior; and he looks an awful lot like this little fella pictured here!)

This page of illustrations for the letter C didn't make the cut either, even though it had been one of my favorites the first time around. 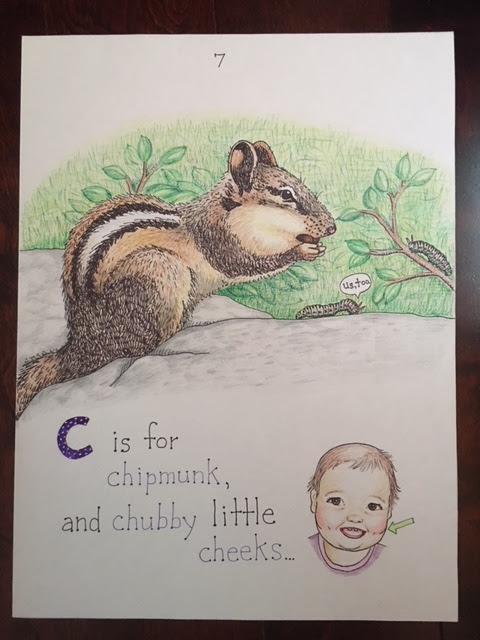 If you've been following along with the ABC Book posts, you've probably figured out by now that two of my favorite subjects to draw and paint are children's faces and furry animals.  Inanimate objects never get me as excited as living, breathing examples of cuteness.

Even though that old illustration won't appear in the final version of the book, you can be sure that there will still be plenty of chubby little cheeks involved (like you see here on this precious face, still a work in progress, inspired by a newborn photo of my youngest granddaughter).
Someone asked me, "Why Nancy?"  The answer is simple, really: I needed an N name, and my paternal grandmother was named Nancy.  She had just five grandchildren, my four siblings and myself; she was our champion, always--she thought we hung the moon.  We all loved her dearly, and I thought this was a nice way to honor her memory.

Okay then, if I really intend to finish this thing, I better sign off and get to work!  But I thought you might be interested in a little update on how things are progressing.
Posted by Laura Pearl at 10:13 AM