Birds in the Bathroom

When we moved into our new house here in VA, we noticed that most of the rooms appeared to have been freshly painted--which I definitely appreciated.  Luckily, I liked all of the colors the former owners had chosen--or at least if I didn't think they were quite my cup of tea initially, they gradually grew on me.  The only room that I have repainted since we moved in is the master bedroom, the white walls of which were showing more wear and tear than any of the others in the house.  (We chose a neutral, grayish-beige shade called "Revere Pewter," after we saw how good it looked in our middle son's home.)

The half-bath in the hallway off the kitchen was a cheery sky blue, and at first I thought I might prefer a more subtle (and currently on trend) shade of gray.  I had painted both of the upstairs bathrooms in our old house pale gray, once we decided that we were going to sell, and I really liked the way it looked.

However, the more I studied that blue bathroom, the more the color grew on me.   I had already planned that I was going to hang some framed photos of birds in this bathroom--and not just any birds, but the birds that used to grace the walls of our old upstairs bathrooms (before we went all HGTV and painted over them to get the house ready to show).  Sky blue walls would be the perfect backdrop.

In this photo of the bathroom in our old house (the one our boys used to share), which was taken before we began renovating it last fall, you can see a seagull perched on top of the shower. 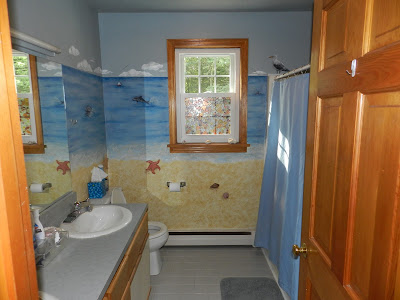 In our old master bathroom, there was a robin standing on top of the shower.

Anyway, I decided that the only thing missing to make my bird pictures look at home in the new bathroom was a scattering of fluffy white clouds.  These took about 15 minutes to add, using some acrylic paint and a round sponge. 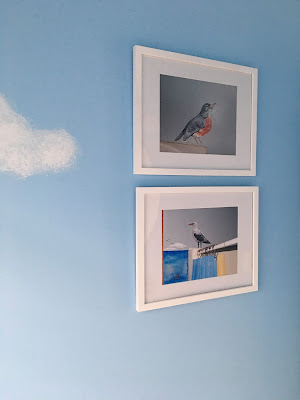 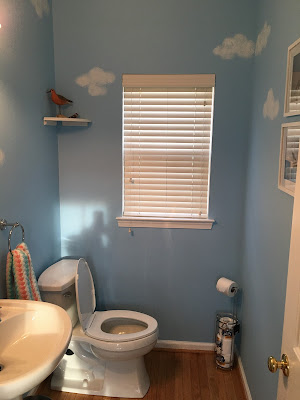 There was a little corner shelf hanging in there, left behind by the previous owners.  And I had the perfect knickknack to fill it: a wooden shore bird that was hand-carved and painted by a highly esteemed artist named Delbert "Cigar" Daisey, a Chincoteague, VA native who is well-known for his intricately detailed bird decoys.   (I actually met him once and blogged about the experience, if you're interested.) 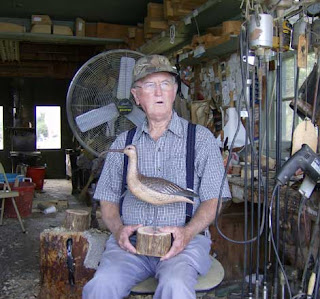 Cigar was my late aunt's boyfriend; after her death, my mother inherited the wooden bird carvings he'd given to her as gifts, and then she passed some of them on to her own daughters.  The one Mom gave to me now sits on that shelf in my first-floor powder room.  (He shares the shelf with a little fired clay souvenir I bought in Cancun when my husband and I took our delayed honeymoon in 1982, about a year and a half after our wedding, after he'd earned his Naval Aviator's wings.) 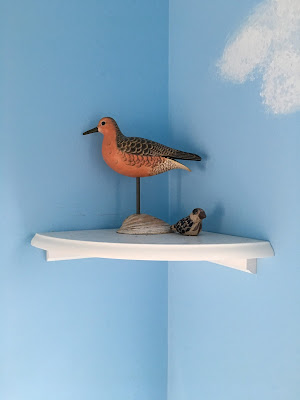 When my second-oldest son was at our house on Easter and saw the clouds in the bathroom, he teased, "You just couldn't help yourself, could you?"  No, I couldn't.  I've always had to have bits of whimsy in my home.  Such as various animals--pigs, birds, squirrels, you name it--painted on the walls.  And most blue walls just cry out for clouds, as far as I'm concerned.  It was almost as if once I got those clouds added to that bathroom, the house felt more like "ours."

After having to paint over all the animals that had decorated the walls of our NH house, I just don't think I have the heart to paint new ones on the walls of this house.  But I'm finding that it's comforting to have photographs that I took of them hanging here--it's as if they made the move with us, and they seem to be very much at home in their new digs.

In fact, as an afterthought, I added a framed photo of the mouse who used to live just outside the door of the first floor half-bath in our old house. 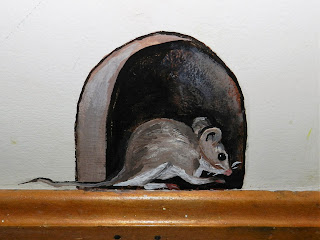 He was painted on the wall just above the floor molding; so I decided that was just where I should hang this little frame. 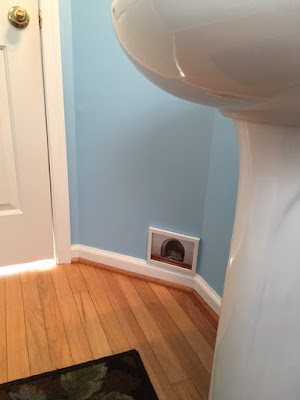 Hanging a picture frame this close to the floor might be a big no-no in the interior designer's handbook, but I don't care.  I believe you need to have fun with your house and make it look the way you want it to, no matter how much the next owner might question your taste.  If you want birds in the bathroom--and clouds, and mice--then you should have them, IMHO.

But then again, no one would ever pay me to decorate their house!
Posted by Laura Pearl at 7:20 AM