A Book Signing, A Book Review, and a Book Club--with Lots 'o Irish in 'Em!

It's a book club day today--a "Grace-filled Tuesday," that is.  So as long as we're supposed to be talking about books here, what better day to tell you about the book signing I had this past weekend?

Here's what I wore for the event: a green sleeveless knit sheath dress that I picked up at the after-season Talbot's clearance sale (along with a red one and a purple one, because I have the kind of husband who says "Get one in every color" when he sees how much I like something); and a navy blue cardigan I stumbled upon in an Irish goods online catalog, embroidered already with a green and white Claddagh design--and as if that wasn't perfect enough, it was monogrammable (but I decided to skip my name or initials and have them embroider my book's title on there instead). 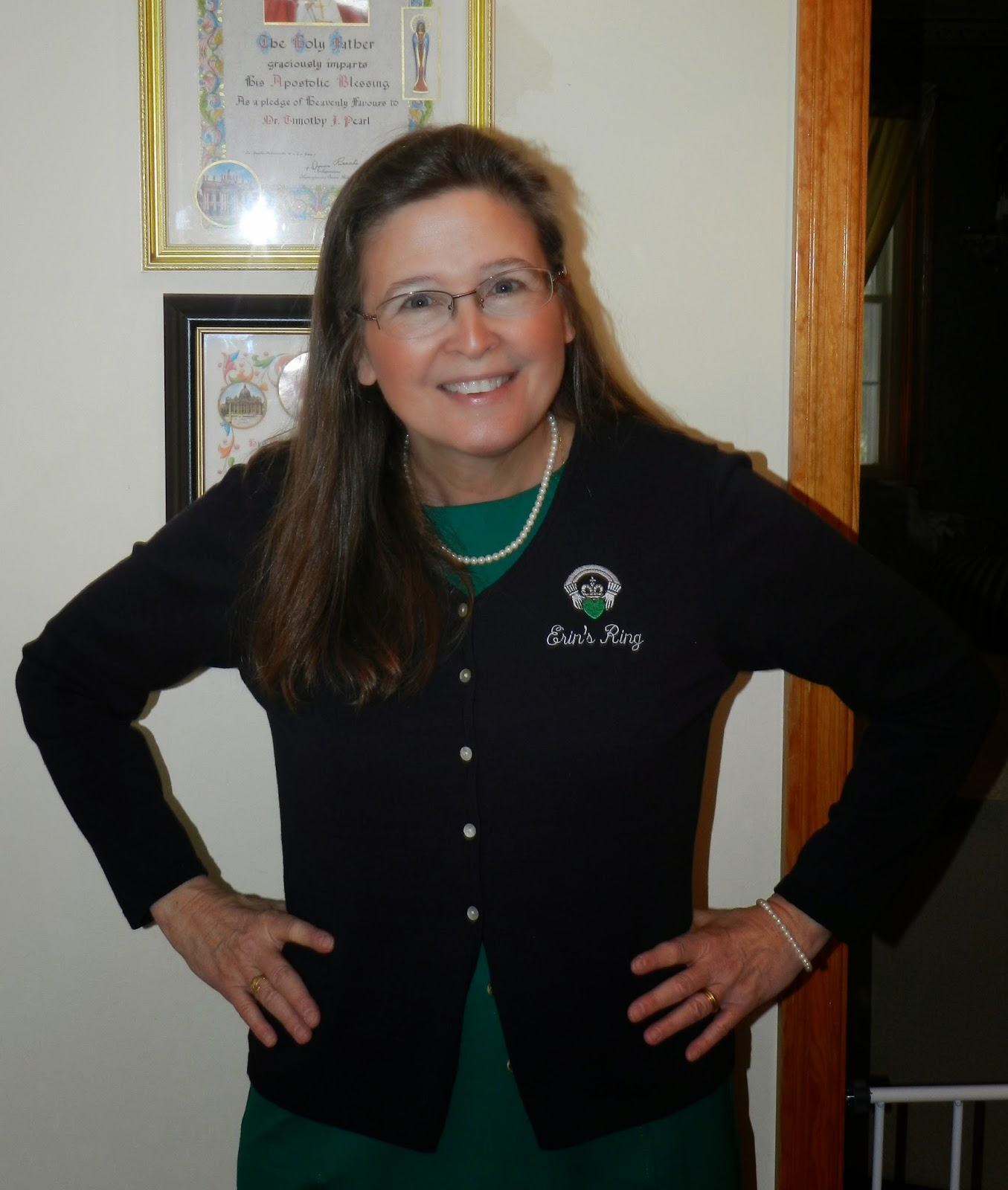 I meant to have my husband take lots of pictures at the book signing, especially when people stopped by to purchase a book and chat.  I thought it might be a good idea to use these pictures of satisfied customers holding their copies as promotional tools.  But it ended up being so busy after almost every one of the five Masses (the anticipated on Saturday, three morning Masses on Sunday, and then a Sunday evening Life Teen Mass), it was all we could do to keep up with making change and putting tick marks in my little notebook to keep track of the numbers.

A person should have such problems, right?  (#feelingblessed)

Overall, we sold 59 copies of Erin's Ring, as well as 10 copies of Finding Grace.  I went into the weekend thinking if we sold a dozen books total, that would be pretty good--so I was not quite prepared for how well it went!  We were able to give a check for over $200 back to our parish (1/4 of the sales), and that felt really, really good.

I had lots of Irish stuff 'n things on my display table.  My publisher, Cheryl Dickow at Bezalel Books, said I should have fun with it.  (The Easter basket was actually her idea--thanks, Cheryl!) 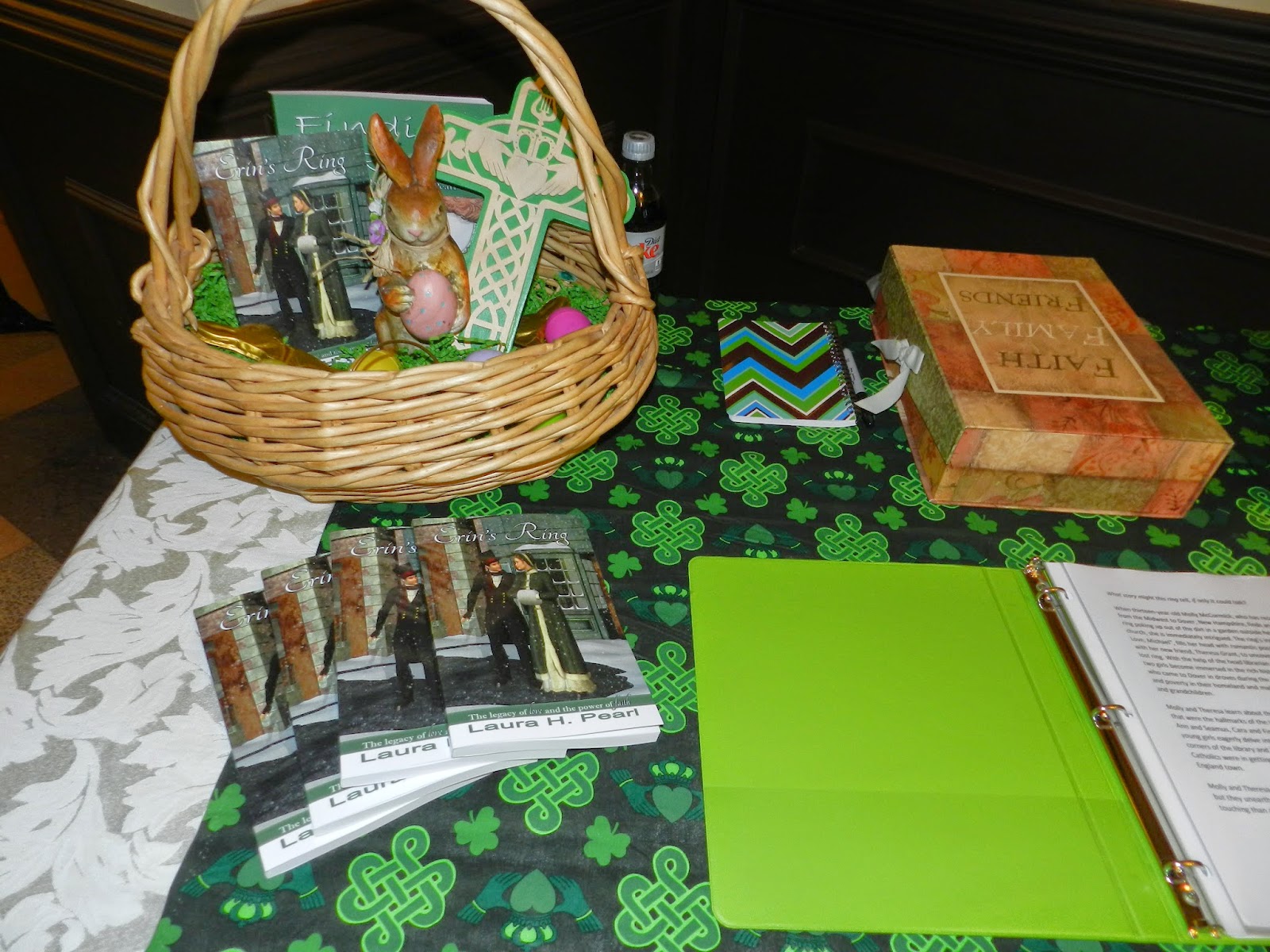 There was an Irish cut-crystal vase (picked up by my husband way back in college, when he went to Ireland for a Notre Dame rugby team trip) with faux shamrocks in it, and even a pot o' gold--filled with coins that were also faux, of course. 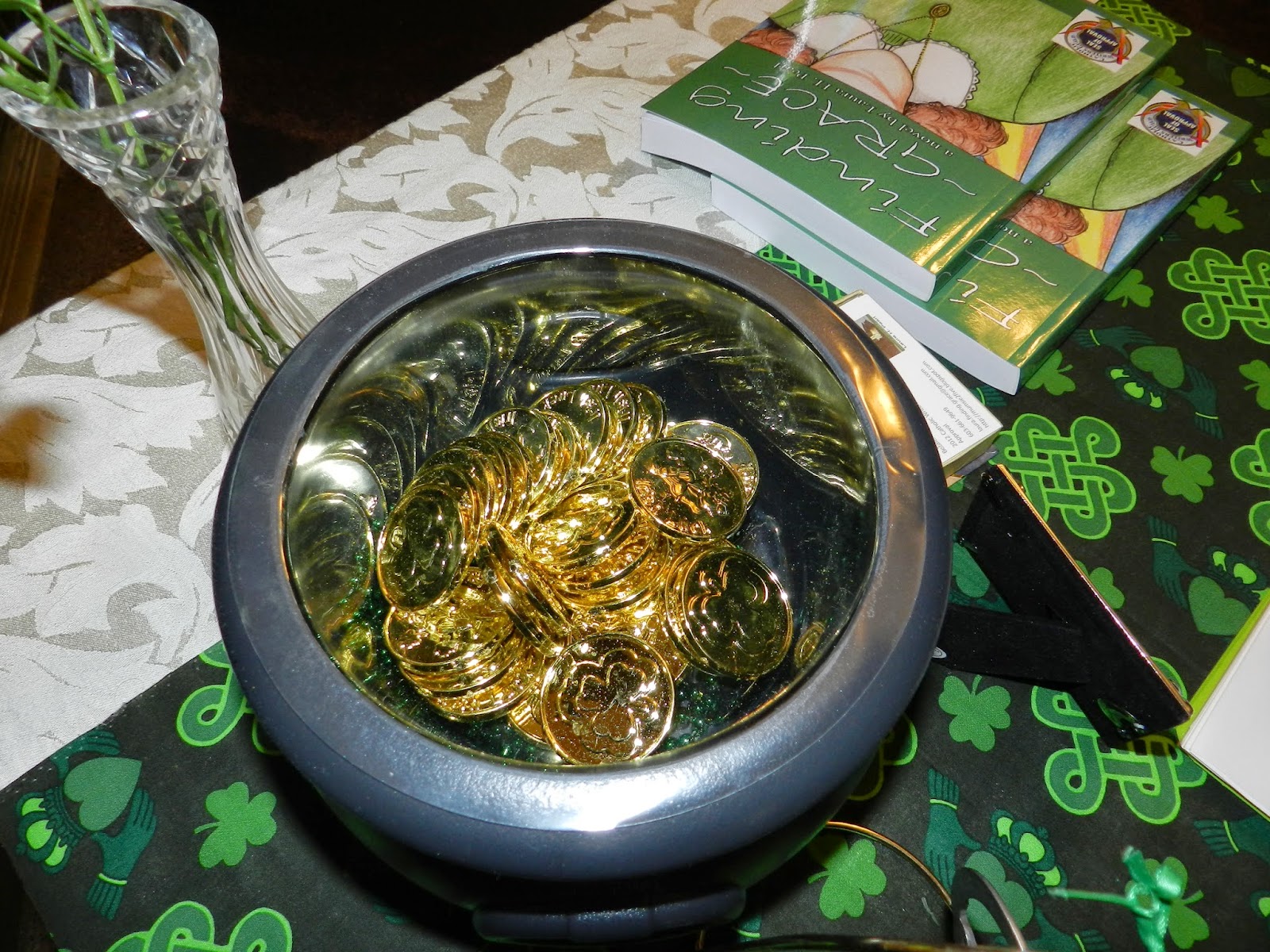 For the first Mass on Saturday, we set up in the foyer near the front doors at St. Mary's (the church that plays such a prominent role in Erin's Ring).  My husband attended this Mass while I got things ready.
After that Mass, we brought everything home, and then set it all up again in the church hall at St. Joseph's (the other church building used by Parish of the Assumption, which was formed by the merger of the three formerly independent Catholic parishes in Dover, NH) the following morning, for the 7:00 a.m. Mass.  I attended this Mass and my husband watched over the table for me until I could come out and join him. 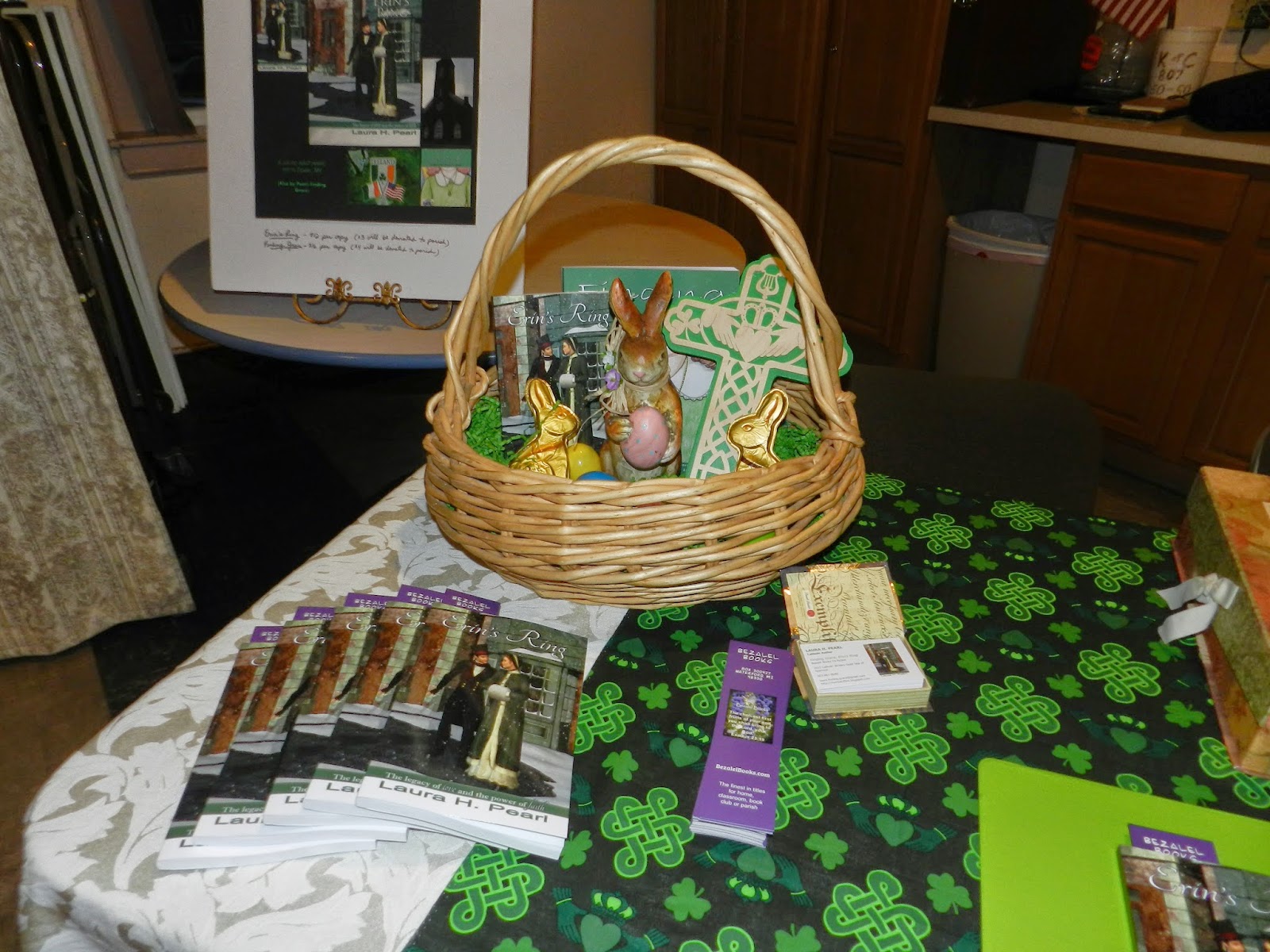 After the 7:00, we packed everything up and headed across town to St. Mary's, where the rest of the book signings were to take place after the 9:00, the 11:00, and the 5:00 p.m. Masses.  The church hall at St. Mary's was the best of all the locations used for this event: it is not only big, light and airy; it is also where the parish hosts its coffee-and-donuts gatherings after the 9:00 and 11:00 Masses, so lots of people come through there.  There was a great deal of interest and enthusiasm about both books from the folks at those Masses.  I wish I'd gotten some "action shots" there, but at least I got a picture with our pastor, Father Aggie. 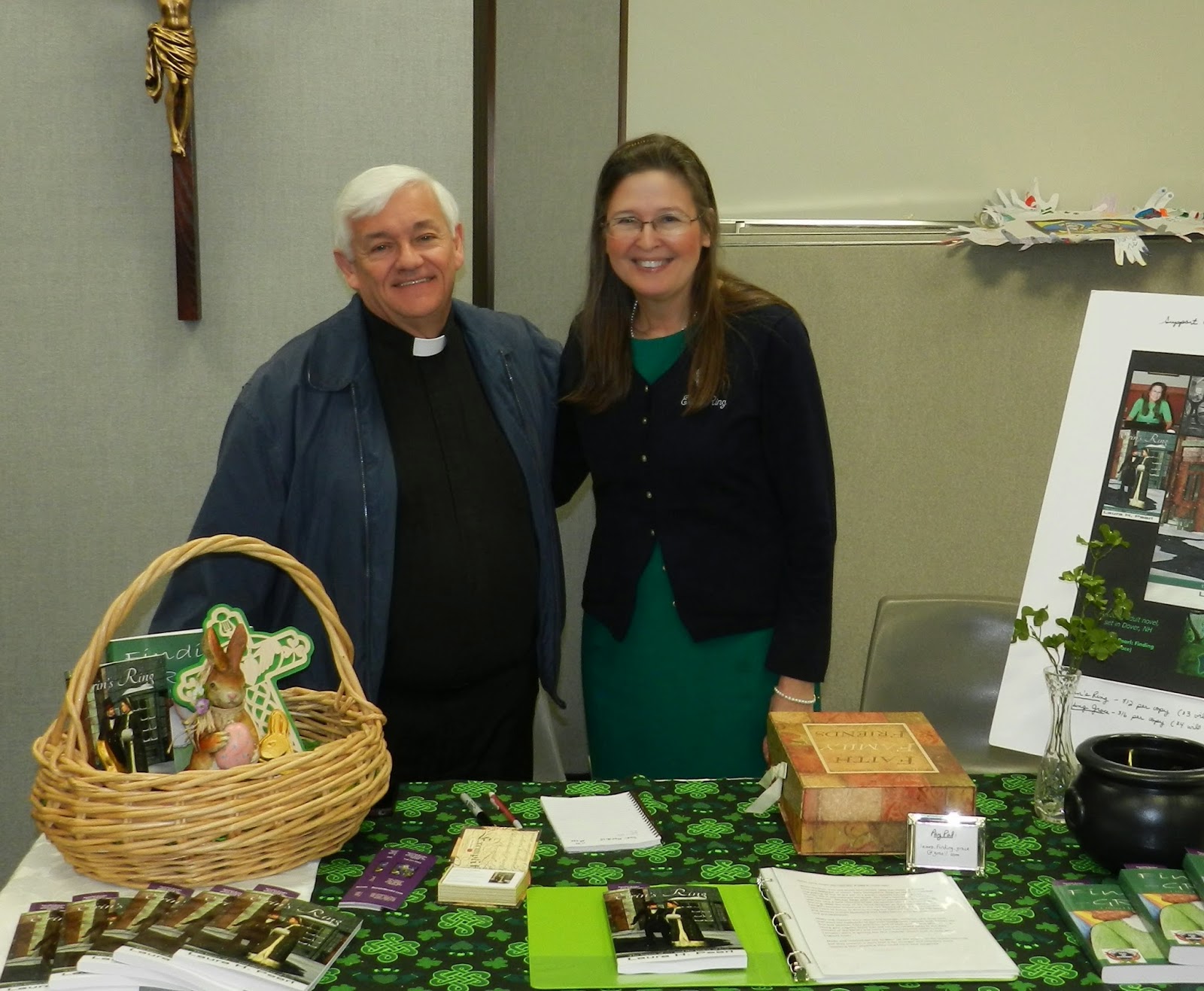 We made one trip back to St. Mary's in the evening, and this time we had to set up in the foyer again because the parish hall was locked.  There were lots of young people at that Mass, and they snapped up quite a few books on their way out of the church.  I pray they will be inspired by them.

I am so incredibly fortunate that my first-ever Erin's Ring book signing was at our parish--and mostly at St. Mary's Church.  My sincerest thanks to Father Aggie and all of my kind and generous fellow parishioners at Parish of the Assumption for making this a successful event.  My cup overflows, it truly does.

Before I sign off, I thought I'd share a new review of Erin's Ring, by Catholic novelist/blogger Kari Burke.  If you haven't read it yet, maybe Kari's words will make you want to, and you can join us here on future Tuesdays when we discuss it!

Okay, I'm off now--to work on preparing my New England boiled dinner and green cake!  Because even though it's Lent, tonight--in honor of good St. Patrick--we feast!
Posted by Laura Pearl at 12:54 PM