Sometimes I go the lazy route here at String of Pearls, and I show you old posts instead of coming up with something new.  And you guessed it, that's what I've decided to do today.

Not that I get so many visitors nowadays--but when I first posted this little story two years ago, hardly anyone was reading this blog.  I think this particular post got less than 25 "hits" back then, so unless you're among a handful of loyal longtime readers (mostly related to me by blood or marriage), you probably haven't read it yet--and it'll be new to you!

This one is all about my oldest son, who was very reluctant to play an angel in the kindergarten Christmas pageant at his Catholic school.  When he balked at having to dress "like a girl," I really felt for him.  I should have gotten him a slew of books about sword-wielding, manly angels like St. Michael the Archangel to get him pumped up for the role, I can see that now.  But I did the next best thing and fashioned him a costume that he felt comfortable wearing.  One that he didn't consider to be an affront to his manhood.

And who's to say all angels wear flowing robes, anyway?

Before we moved east and settled in this New England town, where all of our sons attended the same Catholic grade school, our oldest son spent his first half-year of kindergarten at a Catholic school in Illinois.   And one of the last things he did as a student at that school was to play an angel in the Christmas pageant.

For some reason, it was decided that particular year (1989) that the girls would play the shepherds and the boys would be the angels, and this caused my son a whole lot of 6-year-old angst.  Although a shepherd's costume would have consisted of a bathrobe or some other type of  long, flowing garment, he saw that role as masculine enough.  But he felt very strongly that angel costumes were meant for girls.

"I don't want to wear a white dress!" he said, near tears.

He was really quite distressed, and to say he was reluctant to take part in the pageant is putting it mildly; if he could have gotten out of it altogether, he would have.  So I promised him that I would try to come up with an angel get-up that bore absolutely no resemblance to a dress.  Luckily, each mom was in charge of dressing her own little angel.  And luckily, I was able to find white sweat pants to go with a white turtleneck--and as you can see, my son was one manly little angel.  He was, in fact, the only boy among the Seraphim and Cherubim that night who was wearing pants.

Some might say that I should have just told him to man up and put on an angel's flowing white robe; after all, that's how all the other young ruffians were attired that night.  But I felt I needed to respect his wishes on this one, and he went from reluctant to radiant, all because he was wearing pants.  Look at that angelic smile! 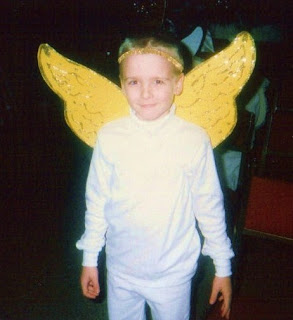 Labels: family, holidays, life with boys
Posted by Laura Pearl at 9:49 AM