Yesterday, I wrote a WWRW post wherein I reviewed a book called The American Heiress, by Daisy Goodwin.  It revolves around a ridiculously wealthy young American named Cora Cash, whose mother wants her to find an English royal to marry so that she will have the one thing money can't buy her on the other side of the pond: a title.  The duke she falls in love with, Ivo, lives in a huge, once majestic but now dusty and dilapidated castle--in need of an heiress's fortune to save it from ruin--called Lulworth.  [Sigh...]  I must admit, stories such as that one, set in the late 1800's or early 1900's, with royals and castles and furs and jewels and will-they-or-won't-they love stories, always seem to get to me.  Needless to say, like everyone and her sister, I am a huge fan of Downton Abbey.  I could watch it for glimpses of the gorgeous dresses modeled by the Crawley women or the sumptuous abbey interiors alone.

You will probably be jealous of me when I tell you that when I was a young girl, I lived in a Downton Abbey-esque place called the Graves Mansion, a Victorian beauty where President Grover Cleveland had once been a houseguest.  It is an imposing brick edifice located in a small Upstate NY town called Au Sable Forks, where there was once a booming mill that made the Graves family very rich. 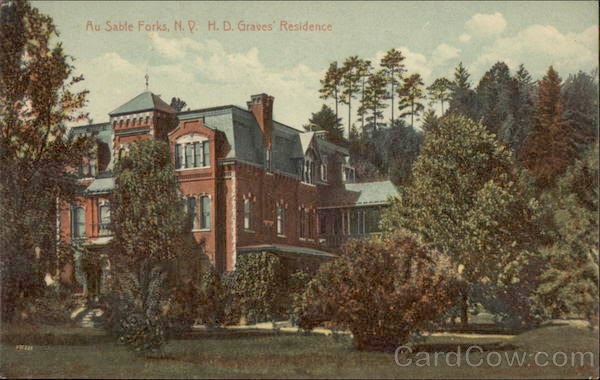 Okay, before I go on, I must clarify: I didn't live in the main part of the house, with my grandmother and her second husband (my father's father had died when he was just a small boy); I lived with my parents and four siblings in a cramped and drafty apartment upstairs that had once been part of the servants quarters.

And I only say that because I refuse to be O'Brien!

Actually, we only lived in this house from when I was mid-way through 3rd grade until the summer before I was to start 5th grade, when I was between the ages of 8-and-a-half and 10.  We moved to Au Sable because my father, who'd been working in NJ and Delaware as an engineer but desperately wanted to return to the North Country where he'd grown up, agreed to change careers and help his mother out by becoming a salesman in the insurance business she and her husband owned and operated out of the big house.  It was a tough situation on many levels, so after just a year-and-a-half, we moved about 45 minutes away from Grandma, to Plattsburgh (which was a metropolis by comparison), and my father started to work for another insurance company. But that short span of time living in my grandmother's magical Victorian mansion left an indelible mark on my young psyche.  It was during that period, in fact, that I first decided I wanted be a writer.

Before I go on, I have to make sure you realize that my grandmother and her husband were not at all wealthy.  They bought the Graves Mansion for a song and went about trying to restore it to its former glory on a shoestring budget.  Grandma found many of the original furnishings in the basement and had them repaired and re-upholstered.  She turned the upper floors into apartments, and the rents from her tenants helped to provide the heat that the dozens of fireplaces throughout the mansion couldn't provide.  She filled her spacious living quarters on the first floor with hundreds of books and countless framed family photos, with fine china and vases of fresh flowers, and the aura of her inborn grace and elegance filled that gigantic home from floor to 20-foot ceiling.  (Those ceilings may not have been 20 feet high, but they sure seemed like it.)

But back to yours truly, the budding writer.  I can remember jotting down little stories in my marble notebooks back in those days; tomorrow I'll share a snippet from one of those notebooks--which amazingly, I still have in my possession.  I'll also tell you about an interesting item I found in my grandmother's attic, and how it inspired me with an idea for a future novel.  (And how when I first saw the movie Somewhere in Time with my husband back in 1980, I said, "They stole my idea!"  Ditto for The Time Traveler's Wife.)  So stay tuned... 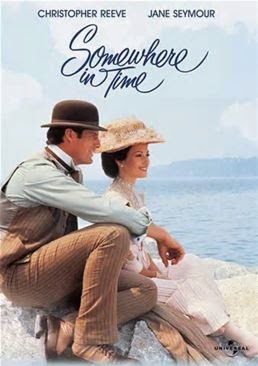 (In the meantime, would you be interested in winning a free copy of the novel I finally DID write, Finding Grace, which is not about time travel at all?  Leave me a comment on String of Pearls before midnight on March 24, and you could win one of the 7 signed copies I'm giving away.)
Posted by Laura Pearl at 10:45 AM