7QTF: Giving Away 7 Copies of Finding Grace, and 7 Endorsements 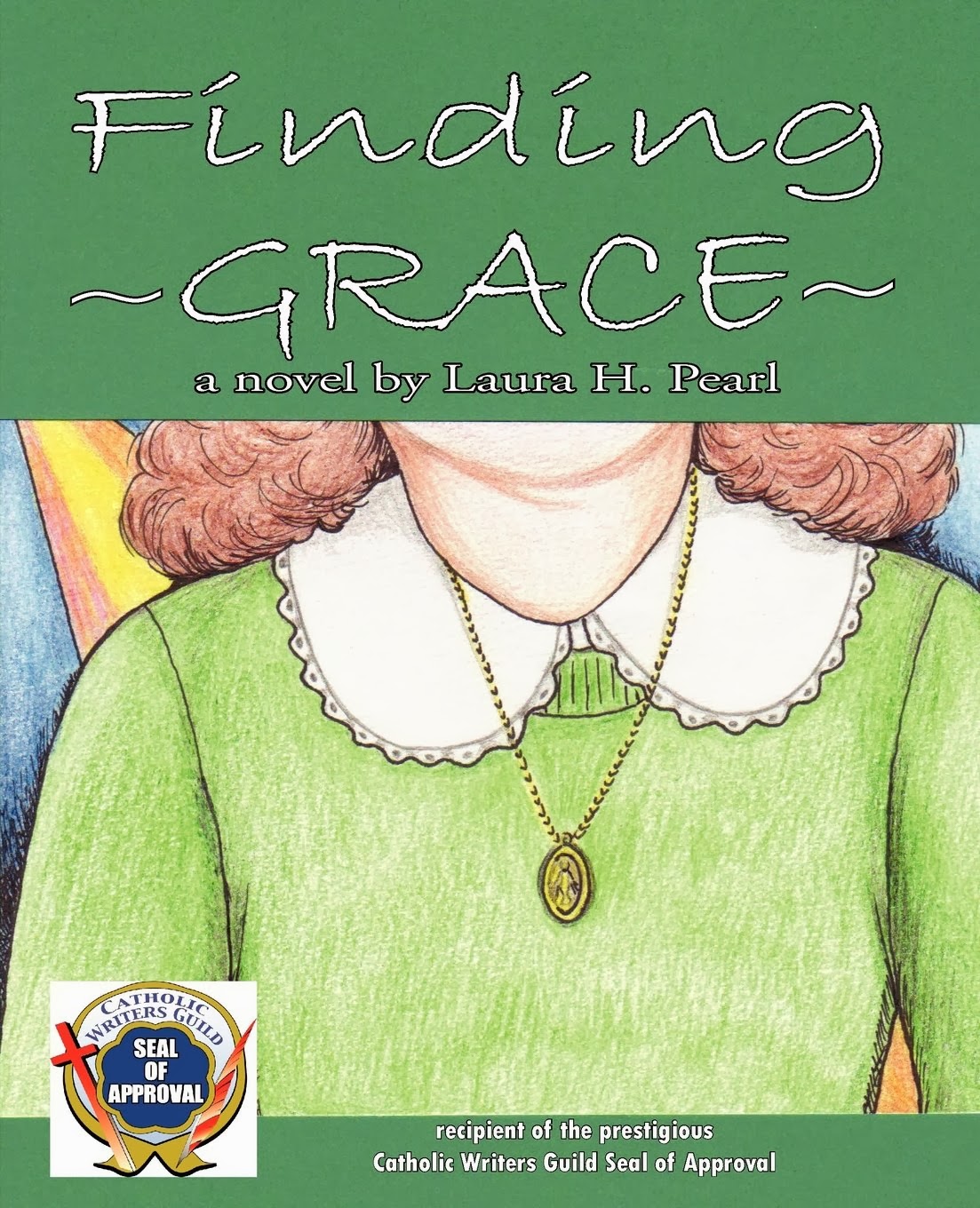 
I AM GIVING AWAY seven signed COPIES OF MY NOVEL, Finding Grace, during the Lenten season.


Just as the different characters in my Catholic novel (a pro-chastity, pro-life, coming-of-age love story) are searching for God’s grace, to help them deal with disappointments, bad choices, and painful losses, we could all use His grace in our lives.  That being said, we could all benefit from inspirational spiritual reading, especially during Lent—and often fiction can stir a reader’s soul in a way non-fiction can’t.  So what better time to host a giveaway for you, my dear readers?
Finding Grace tells the story of a shy and unassuming young girl named Grace Kelly who longs to become a saint, to be in the world but not of the world; but as she begins high school (in the early 1970’s) and falls head-over-heels for the best-looking guy in the class, she realizes that the path to sainthood is strewn with many thorns.  As she struggles through her high school and then her college years, she learns a lot about the lives of the saints in Heaven, about suffering and mortification, and about the importance of following the will of God in her own life.
A recipient of the Catholic Writers Guild Seal of Approval, Finding Grace was also a finalist for the CWG’s Catholic Arts & letters award (CALA).  Those who do read it are usually quite positively affected by it; but it is my goal to get it into the hands of as many readers as possible, particularly young people whose souls are yearning to be fed the Truths of our beautiful Faith.
If you’d like to enter the contest to win one of 7 copies, just leave me a comment on my blog, on any post between now and March 24.  (And please tell your friends, too!)

God Bless you—and may you find grace in lent! 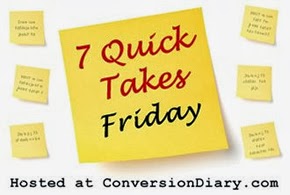 And now, because it's 7 QTF, I'm going to give you 7 reasons why you should enter to win one of 7 copies of Finding Grace.  Here's what other satisfied readers have had to say about it.


-1-
Author Therese Heckenkamp (Past Suspicion, Frozen Footprints) gave it this thumb's up:
"Not a shallow romance, Finding Grace has all the hallmarks readers could want: romance, conflict, humor, life, love, laughter, and tears.

Parents can feel confident in buying this for their teens. Finding Grace is a moral read, without being bland or boring. The importance of family and faith is highlighted. Yes, there are lessons to be learned, but readers will be highly entertained along the way."
-2-
And here's an endorsement from blogger Sarah Therese, who writes at Footprints on My Heart and The Catholic Young Woman:

"I've read other books that are strongly related to Finding Grace and found many of them to be rather idealistic.  Though long, this book is an easy read, realistic, and relatable.  On a personal note, reading it inspired me to deepen my prayer life and wear my miraculous medal more often {actually, constantly}.  It's inspired me to focus on my personal Marian devotion and deepen my friendship with dear Saint Therese {as well as several other saints mentioned throughout the story}.  This is a great book for any Catholic young woman who is seeking to deepen her relationship with Christ."
﻿
﻿
﻿
-3-
Author Amy M. Bennett (End of the Road) said I must have been hiding under her bed when she was 13, because she identified with the main character so strongly:
﻿
"It's not often an author can combine solid Catholic theology with laugh-out-loud and almost cringe-worthy real-life characters. Laura Pearl does a masterful job in Finding Grace.

As the story of Grace's teen years unfold, American society during the turbulent '60s and '70s with its radical ideas becomes Grace's biggest opponent to her goal of becoming a saint. I, for one, strongly identified with her and her desire for true love, especially in a world that seems to find traditional mores impossible to live with and personal sanctity an impossible ideal to live up to. Yet through it all, Grace perseveres in her faith and love of family, and despite her myriad setbacks, she discovers that true saintliness is achieved by discerning God's will for one's life and accepting it whole-heartedly."
-4-
My dear blogging friend Kate Harvey of Something Ivory (and also a co-author of a cookbook called Finger Lakes Feast) had only good things to say:

"Finding Grace is so beautifully written and so refreshing to read. It is a far cry from the usual young adult novels (although this book is wonderful for adults, too). Its themes of faith, family, finding true love, growing up in a fallen world, and having compassion for one another really resonated with me, and Pearl has a true gift for infusing these deeper topics with light-heartedness and humor and, well, grace.

Each character was clearly so lovingly crafted and the love story that runs throughout is oh so romantic! For so many reasons, I can see myself reading this with my future daughter. It brought both tears and laughter and is overall a beautiful, moving novel. I highly recommend it."

-5-
Author, blogger, and Catholic Writers Guild VP Sarah Rhinehard's review meant the world to me.  She writes:
"I won't lie: this book was long. That said, it was REALLY well-written and the character development was stellar. It's set in the 1970s and early 80s, and the story is Catholic in a way that's both cultural and ingrained. It gave me a sense of what it's like to be raised Catholic and to have it be part of everything you do.
Did that make you feel like it's shoved down your throat? Because it's not: not at ALL. One of the things I appreciated about this book is that it doesn't seem to talk down to its audience, which is the young adult market. It's written like literature and it seems to assume that its reader has a brain. I like that. It's a book I highly recommend and one I'll be sharing."
-6-
Blogger Rebekah Es (who is currently on a sabbatical from her blog, Rebekah's Web Log), gave my book her usual thoughtful analysis:

"Pearl's in-depth characterizations and study of the human heart are definitely the high-light of this endearing novel. Little Grace, in all her insecurities and hidden desires of the heart, her short comings and her successes, cannot but help to find a place in the reader's heart.

I also particularly enjoyed the tales of saints, and the infusion of literary figures (Grace's analysis of their behavior) throughout the novel. Pearl deftly explores Grace's strengthening perception of right and wrong, desire and will, through evaluating the choices and consequences of those she reads about. And very cleverly, I might add.

I don't recall reading any books with such a theme when I was in high school, a time of great introspection and soul searching for me, as I am sure it is for many girls...I know that I would have appreciated and benefited from reading Grace's story during that awkward time, just as I benefited from reading it now!"


-7-
And just to prove that Finding Grace is not just for teens, and not just for chicks, here is an Amazon endorsement that just made my day (and Scout's honor, it wasn't written by anyone related to me!):

"I'm not technically this book's target audience, as a 40-something male, but the story of Grace Kelly drew me in bit by bit and before I knew it, I was in "I can't put it down" mode. It's a great mix of the simple heartwarming life in an Irish Catholic family, along with the growing pains and tensions of coming of age in high school, and then there's the gradual building of distance between Grace and her best friend Irene. Furthermore, the author does an excellent job of showing the trials of unrequited love that Grace feels towards one of her close male friends and never lets on how it's going to play out until we get to the outstanding conclusion.

This book does a terrific job of blending simple uplift with real tension, and squarely confronts issues that confronted society, and by extension the Catholic Church in the early-to-mid 1970s, the fallout with which we live with today. And even if you're not Catholic, it's just a good story."

Well, those Takes weren't all that Quick...but I hope they inspired you to visit my blog and leave me a comment, so that you have a chance to win one of the 7 signed giveaway copies of Finding Grace.  Now head on over to Jen's for more 7QTF fun.
﻿
Posted by Laura Pearl at 2:37 AM