Two Weeks 'Til the Wedding of Son #4!

Two weeks from today, son #4 is getting married.

That's right, this guy--this cute little munchkin--is getting married.  He is going to be a husband.  How, I ask you, is that possible?
Even he looks shocked about it.

Of course, he's not a two-year-old anymore.  He's a lot bigger, and a lot more grown-up, than he was when that photo was taken.  He's very serious and mature these days.  As you can plainly see by perusing these more recent pictures.
I'm having trouble even wrapping my brain around the concept that in a mere matter of weeks, three of my five sons will be married.

I blinked, y'all.  And this is what happened.  (Yes, I just said "y'all."  My husband and I spent the first few years of our marriage in Texas, where he was in Navy flight school, and I actually found myself using that term for real after a while.  Now that we've been back in our old stomping grounds up north for a couple of decades, of course, all y'all are back to being "you guys.")

So the countdown begins.  And I think I'm ready--although I'm afraid to try on my dress, because I believe it might have gotten a tad snug since I first tried it on.  I put on a few el bee's over the Christmas holidays and they seem to like their new home so much that they've decided to stick around for a while.  I keep planning to go on a big fast to lose them in time...and then I say, "I'll start that fast tomorrow!"

It's a pretty dress, though.  Let me show you. 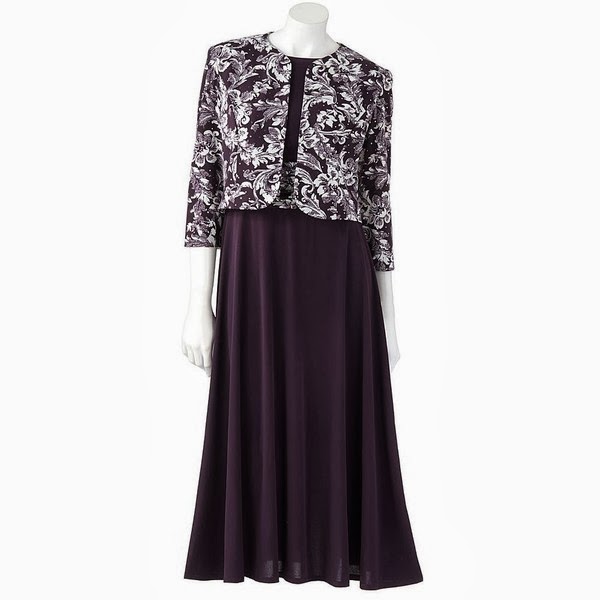 If you think it looks black, you would be as wrong as my husband.  It's a yummy deep purple color, and the jacket is covered with little sparkly beads that catch the light when you move.  It's so pretty, but it would probably look better on me if I was built like this lovely headless mannequin here.

Okay, then, the only thing left to say today is please keep my son and his bride-to-be in your prayers as they prepare for the beautiful Sacrament of Holy Matrimony.
Posted by Laura Pearl at 8:08 AM