Yesterday afternoon, my husband and I went to see a matinee (because one of the perks of being empty-nesters is the spur-of-the-moment movie date).

If you haven't seen "The Monuments Men" yet, I can't recommend it highly enough.  It's packed with big-name stars like Matt Damon, George Cluny, Cate Blanchett, and Bill Murray (in an understated role for the comedian); it's very entertaining and will even make you chuckle at times.  But it will also remind you of the horror of Hitler's vile hatred of the Jews--and it will do this without ever actually showing you what any of his Jewish victims went through.  You will see it through a ransacked and empty apartment... with a spot on the wall where an oil portrait used to hang, before the lives of the family that used to live in that apartment were torn apart forever.  It will break your heart at times, and move and touch you in ways you never expected.  At least that's how my husband and I both felt as we left the theater. 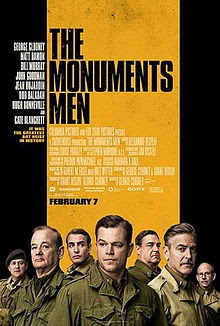 This movie is based upon a true story about a small group of men, (American and English) who were assembled during the waning days of World War II to go over to Europe and try to locate and reclaim the millions of works of art that the Nazis had stolen throughout the continent.  This rather rag-tag group of not-so-young men was made up of museum curators, art historians, and architects, and they went through basic training in order to join the war effort overseas as real soldiers--soldiers sent to protect the history of mankind, of Christianity, and of Western Civilization, when it comes right down to it; soldiers with the mission of bringing these precious stolen pieces back, unharmed if possible, to their rightful owners.  I have read so many accounts, both fictional and non-fictional, about the WWII era, with which I have always been fascinated; but this is a story I don't remember hearing about before.

Hitler ruthlessly stole an extraordinarily enormous number of famous and important works of art during the war--something like five million pieces--and hid them away (I won't tell you where, because that would spoil the movie's plot for you).  He took them from museums in the cities that were occupied by Germany; but he also took them from private collections.  And of course, many of those private works of art were owned by Jews, and were torn from their homes right along with their owners when the Nazis came to haul them away to concentration camps.  The paintings and statues were of far more worth to Hitler than human beings, however; his plan was not to destroy them, but to possess them and to showcase them after the war in his own personal museum.  But he also left instructions that if Germany was to lose the war, or he himself was to die, all of those priceless pieces of history he'd amassed were to be burned.  In the end, had it not been for the Monuments Men, all of that artwork was slated to meet the same fate as the souls who never made it out of the camps.

The work these art enthusiasts did might not sound very dangerous when you compare it with the mission of the Allied troops who landed at Normandy shortly before the Monuments Men arrived on the scene, or with the soldiers fighting battles at the front; but the war wasn't quite over yet, and their lives were on the line just like any of the troops fighting over there.  In the course of the movie, some of the men involved in this mission are asked if a piece of artwork is worth a man's life.   Put that way, the normal impulse might be to answer, "Of course not!"--because no thing on earth is as valuable as the life of a human being, obviously.  But the Monuments Men believed in their mission.  To them, it was about preserving something that was more than just canvas or marble, really.  If Hitler had been successful in eradicating all of that irreplaceable artwork--that history--from the face of the earth, then even though he lost the war, in a way he would have won.  These men felt a calling to preserve all of those historically significant works of art for future generations and for the good of all mankind, and they were willing to risk their lives to do it.  Each and every piece they took back from Hitler represented a moral victory over one of the greatest forces of evil the world has ever known.

It is notable that so many of the greatest works of art the world has ever known are Catholic ones, and this Hollywood movie doesn't hesitate to show that at all.  Two of the most significant pieces that the Monuments Men are in search of were stolen from Belgium by the Nazis: the Ghent Altarpiece
(also known as the "Adoration of the Mystic Lamb"), which is made up of 12 painted panels; 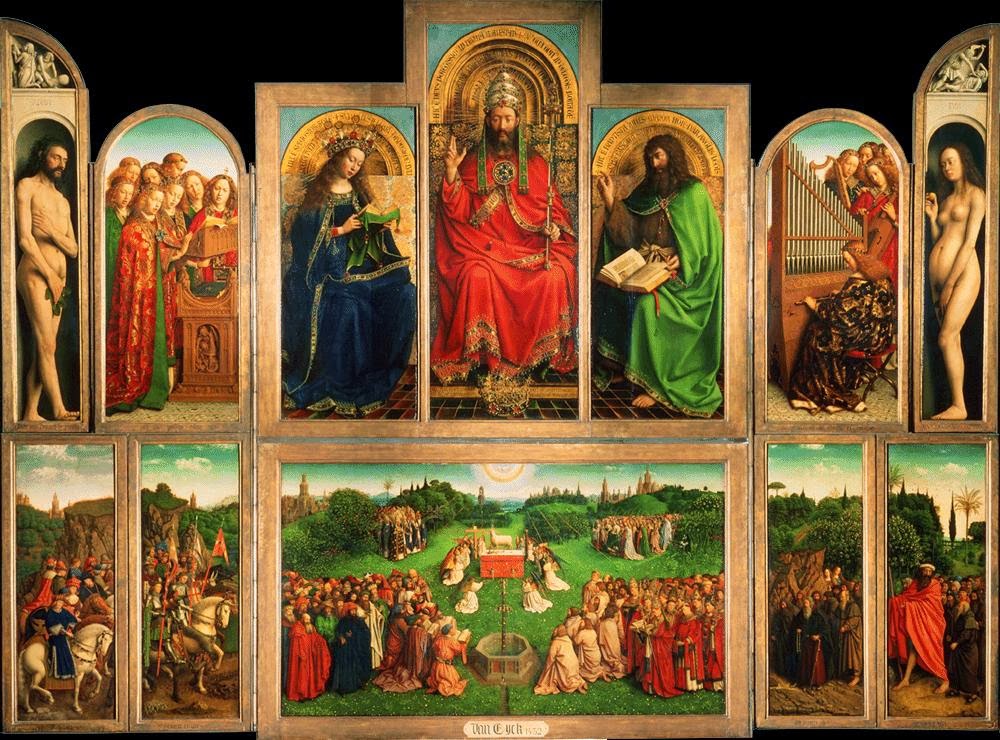 and Michelangelo's "Madonna and Child," from Bruges. 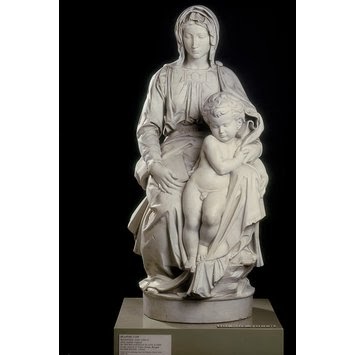 Finding them and seeing that they are returned to their rightful owners is nothing less than a vocation for these men, who risk life and limb to recover them.  I want to tell you about the way George Cluny reacts in the presence of one of these precious Faith-inspired images, because it brought a lump to my throat--but again, I don't want to ruin it if you're planning to go see the movie.  Suffice it to say that I was extremely pleasantly surprised by the fact that the Catholic Faith, so often the object of ridicule and criticism in movies, was treated with great respect--and its images, with utmost reverence.

This is a clean movie, with a PG-13 rating for some scenes of war violence (but not too, too bad) and some swear words.  I highly recommend it, whether you're a WWII buff or not.  And for you readers out there: there's a BOOK BY THE SAME TITLE!  (It's already on my Goodreads "To Read" list!)