Jumping on the Dinovember Bandwagon!

An intriguing post came across my Facebook news feed the other day, a shared article about a little something called "Dinovember."  Here's a picture from the article--a little teaser for you, in case you decided it wasn't worth your time to click on the handy link I just left you. 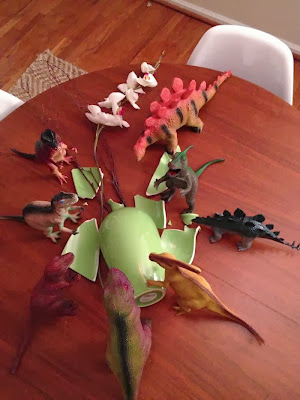 Trust me, this  is just about the coolest idea ever. It makes me wish our dino-lovin' boys were wee lads again, so that my husband and I could do for them what these uber-creative parents are doing for theirs.  They are pretending that their kids' plastic dinosaurs come to life during the night, Toy Story-style; and when the kids wake up each and every morning during the month of November, they see what the little prehistoric rascals have been up to.  Outstanding!

Okay, here's another picture--but after this, if you haven't clicked on that link up there yet, you really should.  The article not only gives more hilarious scenes of dinosaur naughtiness and mayhem, but it also explains why these parents came up with this idea for a "month-long imagination invasion" in the first place. 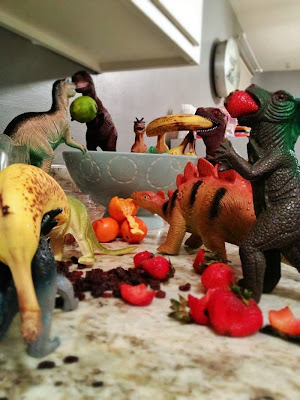 My boys are now between the ages of going-on-21 and 30; but they all remain little boys at heart.  They still love dinosaurs.  My middle son--the one who's getting married in less than two weeks--was surprised with a dino-themed birthday party thrown by his fiancée when he turned 27 in May.  (I think I made him a dinosaur-themed birthday cake when he turned 7, too.) 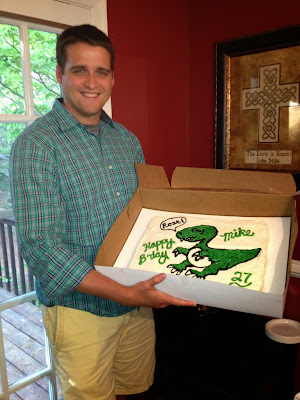 L
I just couldn't help myself: this morning, I decided to try my hand at creating some Dinovember magic.  (You never know when such a skill will come in handy--with the grandkids, of course.  Yeah, that's it, the grandkids.  Because obviously my boys are much too old for such shenanigans...or are they?)
We have so many toy dinosaurs in our attic--I've been incapable of giving even one of them away over the years.  Even the broken ones are stored up there, together with the ones that made it through five boys intact.  If all of those extinct creatures came to life and got loose at the same time, there's no telling how much chaos they would cause around here.
Okay, that was fun for me.  Was it fun for you?
Have a great week!
(And don't forget the Finding Grace giveaway.)