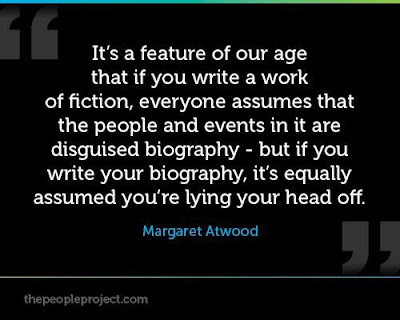 An author e-friend of mine named Amy M. Bennett* (who was kind enough to leave an endorsement of Finding Grace on my Amazon page) recently posted the above quote on her Facebook page, and I just had to share it here.  It's so true! Although there can't help but be some autobiographical elements in works of fiction (particularly in an author's first novel), my main character, Grace Kelly, is definitely not me, and her story is not my story.  I'd tell you one glaring difference in the way our stories turned out right now, but that might spoil the book for those of you who haven't read it yet.  (Hey, if you haven't read it and you'd like to get your hands on a copy, e-mail me and we'll talk.  I can send you a signed copy for lower than the Amazon price and I'd love to hear from you!)

I thought it might be kind of fun to do a little series here on the blog, outlining the characters who were inspired in part by people I actually know or knew, but over the course of the four-and-a-half-year writing process completely took on a life of their own, as well as the places, events, and other elements in the book that come from true experiences I've had, versus the things that are completely made up (as well as the things that sort of happened, but were tweaked and used in a different way to fit my story).

It can be like one of those "The Making of" extras that come with DVD's sometimes--those short films that give the viewer a better idea of the process the writer, director, actors, and producers went through to create the movie.  It will be a "The Making of Finding Grace" blogumentary (is that a word?), in installments, for those of you who are interested.

My husband and I are still out west visiting with our oldest son, his wife, and our three beautiful granddaughters, and I haven't had the drive or the energy to do a whole lot of writing this week.  Plus it's very cute: the two-year-old-twins don't like to see us on our iPhones or any other gadgets that make us inattentive.  Our second oldest son called to talk to his dad yesterday, and Cutie Pie stood at her Papa's feet, crying and saying, "Phone off!"  Sooooo...the last thing I want to do is spend time blogging while they're awake; and by the time they go to sleep at night, I'm too tired!  (As my mother-in-law always used to say, taking care of little people full-time is definitely for the young!)

I recently got an e-mail from a lovely blogging friend of mine named Erica (of Boys, Books, and Balls), who read FG and told me, "I love to discover that an author I enjoy reading has a blog. It is fun to know more about them and to understand why they wrote the story in the first place."  That got me thinking that there might be other readers out there who would also be interested in knowing more about why I wrote my book and which elements are slightly autobiographical.

I'm not going to tackle this little project in earnest until I get back into my normal routine, but here are a few tidbits to start out.:

1. I did grow up in Plattsburgh, NY (from the age of 10, anyway).  Like Grace, I lived in town, right around the corner from the state university.  Our house # was 185, too, but I named the street "Montclair Street" in the book, because I was born in Montclair, NJ.

2.  My best friend from grade school did live out on the lake, in Cumberland Head, and she did have Italian relatives in Troy.  But the main reason I needed Irene to have relatives who'd immigrated from Italy was that I wanted there to be a personal connection between them and Blessed Pier Giorgio Frassati (whom I feel a devotion to and wanted to include in the book).

3. I did not have five older brothers, like Grace.  I was the second-born child (firstborn daughter) in a family of three girls and two boys.  Grace's older brothers in the book are definitely inspired by my own five sons.

Okay, that's just a little teaser to hold you over until next time.  In the meantime, if you'd like more information about what inspired me to start writing Finding Grace in the first place, you can click on this link to a CatholicMom.com article from November of 2012.  (There is a little typo at the beginning, where I am introduced as guest contributor Laura Grace--and now I wish I'd actually had Grace as my middle name. But my dad decided I didn't need one...and if you've read the first chapter of my book, now you know one way Grace's dad and mine are very much alike!)

(*Amy M. Bennett is the author of a soon-to-be-released novel titled End of the Road.)
Posted by Laura Pearl at 3:56 PM