I have to show a picture I unearthed during my big picture organizing project.  This digitally-captured image of my son and his wife was taken at an awesome little museum called the Woodman Institute--the pride of our downtown area--way back in the spring of 2010, when these kids were newlyweds who had no idea that within a year or so they would become the parents of twin baby girls.

The Woodman Institute looks like nothing more than a quaint old brick house from the outside, but don't judge this book by its cover.  There is no end to the treasures--of both the scientific and the historical variety--you will find in this little gem of a place.  It has the most amazing things jumbled together within its walls: stuffed creatures of every kind, from smaller ones like fish, birds, and rodents to larger mammals such as a buffalo, a moose, and a polar bear (to name just a few); uniforms and weapons from every war in which the U.S. has been involved; a saddle upon which Abe Lincoln himself once sat; old coins and letters; Indian artifacts; collections of rocks, shells, and fossils; even oddities like two-headed snakes pickled in jars...and as I said before, a polar bear. 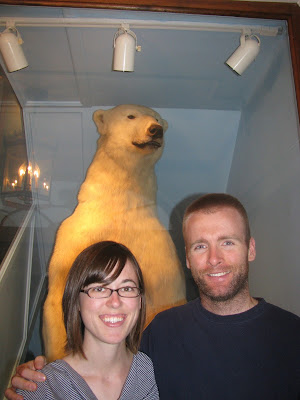 I love this picture--and I think the twins would as well, because it features their two very favorite people on earth, along with one of their better-loved furry friends.  ("Bee-ah!" "Growl!")

Here's another one I love, too, because it illustrates what a great protector they have in their dad. 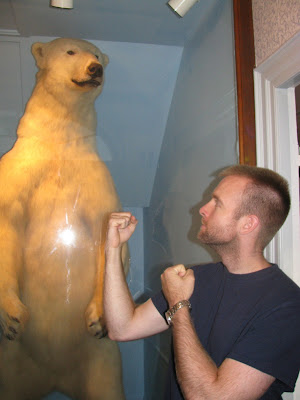 He was getting prepared, even back then, to do battle for his girls.  Bonny and Cutie, you're safe with Daddy.
Posted by Laura Pearl at 7:30 AM