--- 1 ---
We are getting hit with a good old-fashioned Nor'easter today, and we'll probably get from one to two feet of snow by tomorrow.   Par for the course when you live up here in New England.  Ahhh, you gotta love the Northeast!  (I know that sounded sarcastic, and it was--a little.  But I actually do love the Northeast, where there are four distinct seasons--and winter is most definitely one of them.)

It's actually sort of fun being inside during a blizzard, watching the whole world outside turn white...as long as you don't have to be anywhere and you don't lose power.  (Or if you do, you have a fireplace and a stack of logs ready for burning--or better yet, a generator.  And luckily, we have both.)  If you have the essentials on hand (like coffee and a good book), then you can survive blizzards just fine.
--- 2 ---
Speaking of good books, I have a recommendation for you: Katharine Grubb's Falling for Your Madness.  If you enjoy a great love story, and you wish we could go back to a time when men were chivalrous knights in shining armor who honored women and treated them with respect--or if you just plain like to read books that are well-written and full of likable characters and witty dialogue--I urge you to get your hands on a copy of this book! Katharine Grubb is a very cool blogger (10 Minute Writer), and this is her debut novel.  I still have several chapters to go before I get to the eagerly-anticipated conclusion, but I plan to curl up with a blanket and a cup of coffee and get right to it as soon as I'm finished writing this blog post!

--- 3 ---
My husband is the greatest guy in the world.  (When I talked to him on the phone last night and told him I wasn't sure I had enough things to write about to do a "7 Quick Takes Friday" post today, he told me to say that!  Even though I reminded him that his greatness was one of the topics in my very first "Quick Takes" four weeks ago and I was going to start sounding like a broken record.  And sheesh, how often did I have to say it?)  All kidding aside, though, he really is. He was supposed to arrive back home today from a trip to London, but his flight into JFK was cancelled.  (If you're wondering why, see #1 above.)  He may not make it home tomorrow, either.  I know you're probably thinking, Oh, the poor guy--stuck in London!  But it doesn't matter how exotic or thrilling the destination is, he says he's never left for a trip without wishing he could just stay home instead.  He's a prince among men, that husband of mine.  And if any man in our modern world is worthy of being described as "chivalrous," it is he.  (I've been thinking of chivalry a lot the last few days; see #2.)

--- 4 ---
My boys love dinosaurs.  They are 29, 28, 26, 25, and 20 now, and they were all absolutely obsessed with those prehistoric creatures when they were but sprats.  However, I'm not saying they loved dinosaurs, past tense; I'm saying they love them in the present--as in, you can still make them happy with dinosaur-themed gifts.  That's something I've learned after raising all boys: even when they become grown-up, responsible men with jobs and lives of their own, they still have a bit of little boy inside them.  Here are some pictures of sons #3 and #5 at Christmas.  Coincidentally, our middle son's girlfriend had gotten him the same t-shirt as a gift that we'd gotten our baby, and my two boys proudly modeled them for these photos. 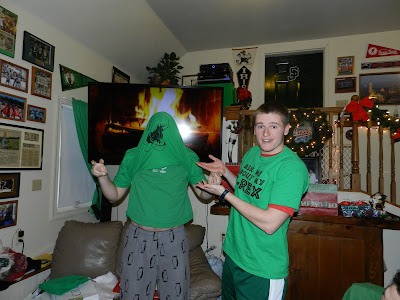 --- 5 ---
When I see anything pertaining to dinos, I think of my boys.  My husband and I were walking around Barcelona together, exactly one week ago today, and we stopped to get a gelato.  The sign outside the gelato place made me almost misty-eyed.  Sniff sniff! 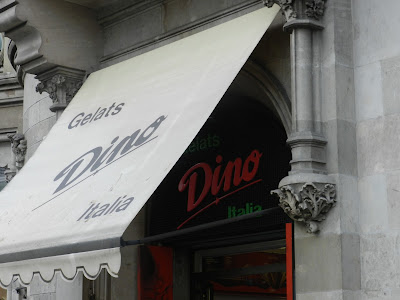 Note the architectural details of this building.  Can you imagine such an ornate structure housing an ice cream shop here in the US?  I am constantly amazed by the beauty of the architecture in Europe, and Barcelona was no exception.
--- 6 ---
Speaking of beautiful architectural details, check out this McDonald's!   I had to take a picture of this Mickey D's in Barcelona.  It looks like it should be a swanky, four-star eatery, doesn't it?  What a gorgeous building! 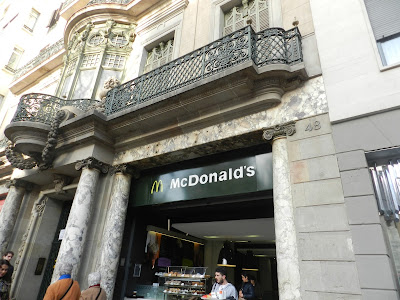 --- 7 ---
By the way, let's be clear: I don't have a glamorous, globe-trotting lifestyle.  If you think, after reading takes # 5 and #6, that I'm always off to Europe on vacation or something, that couldn't be further from the truth.  I am a homebody married to an airline pilot (remember that guy I talked about in #3?), and now that our nest is empty, I occasionally accompany him on his working trips to Europe.  And I'm just enough of an "ugly American tourist" that I feel I must take pictures of the McDonald's restaurants I find in every city I visit over there.  It's a weird habit of mine.

Have a great weekend!  (I'll just be sitting here, reading and watching the snow fall...and hoping my husband finally makes it home from London!)

For more Quick Takes, visit Conversion Diary!
Posted by Laura Pearl at 7:37 AM