The Mother of God

With Christmas only weeks away, I thought I'd post a beautiful painting that came to our house in the mail, via the cover of the latest issue of Columbia (the magazine of the Knights of Columbus).  I absolutely love it, because it depicts the Mother of God as very human--which of course She was--and heavy with child, ready to give birth to Her Son, the Savior of the World.  This painting is a reminder that although Mary's Son was indeed the Son of God, sent by the Father as our Redeemer (note the glowing light emanating from Her rounded belly), He was also made man.  He was flesh and blood, like you and me--a baby born to a loving Mother in a humble stable on Christmas day. 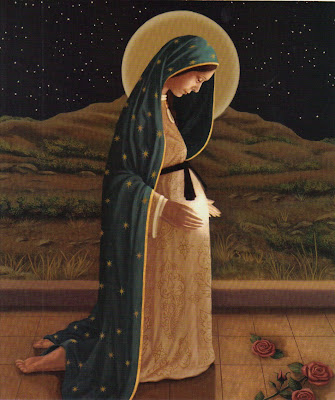 This is not the way Mary, the Mother of God, is usually painted, which is why the image immediately jumped out at me from a large pile of mostly junk mail.  She's usually depicted after the birth of Our Lord, cradling the Baby Jesus in Her arms; but we don't often see Her as an expectant Mother.  This painting is a reminder that She loved that baby boy who grew in Her womb, flesh of Her flesh, as much as I love my own boys--as much as any mother loves her children.  And when, 33 years later, She had to watch Him suffer and die for mankind, it was as excruciating for Her as it would be for any of us.

Here, though, Mary is filled with peace, serenity, and joy as She awaits the birth of Her beloved Son--as are we during this season of Advent.
Posted by Laura Pearl at 5:34 AM