I am a big fan of Grace Kelly.  Perhaps you know this already, especially if you've read my novel Finding Grace.  I named my main character Grace Kelly, in part as a nod to the famous actress/princess whom I admire so much (but also to incorporate my mother's maiden name into the book).

One of the things I love about the iconic Grace Kelly is that she achieved her legendary status as a world-renowned beauty without ever plastering her face with heavy make-up.  Of course, being naturally blessed with flawless skin, bone structure, and facial features--not to mention beautiful blond hair and an enviable figure--makes this a bit easier to accomplish. But still, she was the quintessential "girl next door"--that is, if the girl next door happened to be drop-dead gorgeous.

Grace Kelly also dressed so elegantly and fashionably, but never wore anything that was too low-cut, tight, or revealing. Even photos of her in a bathing suit that made it into the pages of magazines looked wholesome, because she never wore anything too risque or immodest.  I love her style--that classy, put-together, uber- feminine style that was typical of the 40's, 50's, and early 60's; I'm convinced that I was born too late, and would have been happier sporting the glamorous women's fashions from that era than I am wearing the more casual styles of today.  (And yet, despite my resolution to start wearing skirts and dresses more often, I find myself pulling on my trusty go-to jeans almost every day...What about you? Do you wear jeans most of the time?)

Apparently, Grace Kelly and I (and my book's young heroine, too) do have something in common, though; the flawless beauty had one humanizing flaw: she was incredibly near-sighted!  Although she didn't normally wear glasses in her movies, she was photographed in them for magazine stories and covers, and it was reported that she even wore them once to the Oscars.  But here's the thing: Grace Kelly could make even glasses look chic and attractive.  To prove my point, here is a famous photo of her in her specs, from her Hollywood days. 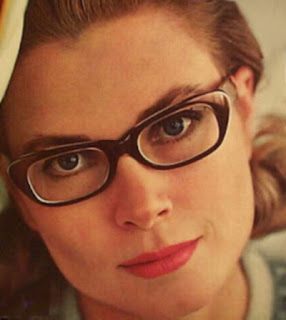 And here's another, from her Monaco days. 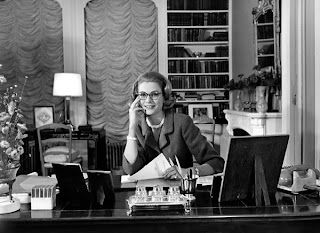 Wow, huh?  Now here's one of me, from my young motherhood days.* 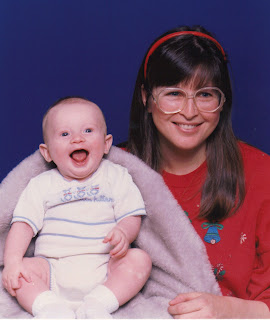 Not exactly Grace Kelly-esque--to put it mildly!  Even my 3-month-old son is laughing at my ridiculously over-sized glasses. Grace Kelly, I suspect, would never have been caught dead in these huge, unattractive frames.  (If you've read my book, perhaps now you can see where my heroine's tendency towards self-castigation comes from!)

(*Just to clarify: I did not plan to have my picture taken when I took my baby in to Wal-Mart for a photo shoot that day!  I would have tried to make myself more presentable if I'd known the photographer was going to convince me to be in one of the shots!)
Posted by Laura Pearl at 10:11 AM