A Pair of Jacks

Wednesday, September 26 was the nine year anniversary of my father-in-law's death.  I should have marked this important date--the day Dad's life here on earth with us ended and he began his everlasting life with God--with a blog post dedicated to him, but I had lost track of the date (it seems without kids living at home and school schedules to follow, I find myself doing this more and more these days).  It's hard to believe that those of us who loved this extraordinary man have been without him for almost a decade already.  We miss him and think of him all the time.  For instance, when my husband and all seven of his siblings were gathered together at Notre Dame last weekend for the Michigan game, we talked about how Jack Pearl, proud alumnus of  ND Class of '49, would have been thrilled to see his beloved Irish--currently ranked #10 in the nation--on the road to becoming a college football powerhouse once again.  Whenever it comes to anything having to do with Notre Dame, or with his children and grandchildren, we often say, "Wouldn't Dad have loved this?"

Before he became a father and then a grandfather, Dad had two accomplishments of which he was inordinately proud: he was a Domer, and then he was a Navy fighter pilot.  I've posted this photo of my father-in-law in his Naval Aviator days before, but I think it bears posting again.  He was some handsome devil, wasn't he? 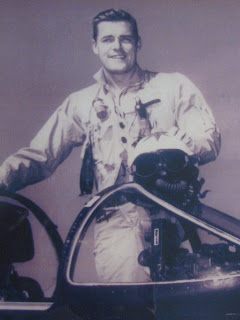 And look at that Dudley-Do-Right chin of his!  All eight of his children, including my hubby, inherited it; there isn't a weak chin in the bunch.

When we were expecting our fifth son, we decided to name him after his grandfather and call him by Papa's nickname, Jack.  When our Jack was a little boy, he resembled me more than he did his dad or his dad's family; he had a round face and looked like he might have inherited my somewhat weak chin instead of the jutting jaw that predominates in the Pearl gene pool.  Jack was only ten when Dad died, still a few years away from his massive growth spurt and a little on the pudgy side; but his grandfather would have been proud if he could have seen the way that little boy took it upon himself to comfort and console his younger cousins as they gathered near the casket in the funeral home.  He didn't look like a man yet, but he was well on his way to becoming one.

Within a few years, our Jack had shot up to 6'2" and lost every trace of baby fat, and his once-short face had lengthened considerably. And the chin that appeared during his teen years was nothing at all like mine, but every inch a Pearl chin.  In fact, as he made his way toward manhood, it appeared that out of our five boys, he was going to end up with the juttiest chin of all.  Here is a picture of our baby with his three Notre Dame roommates, squished into the backseat of our rental car on Sunday night when we took the four of them out to dinner.  That's him, on the left, closest to the camera, sitting on his buddy's lap (please don't report us to the South Bend police!).  And  there's that strong Pearl chin I was telling you about.  His papa's chin. 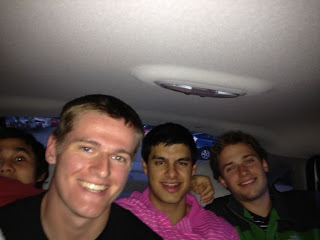 The funny thing is, when he was a little boy, everyone said Jack looked like me.  But when I look at this picture, I am reminded of another Jack--the handsome Naval Aviator in the picture above.  I think these two Jacks make a real pair.  And when I imagine how proud our baby's grandfather would be if he could see his young namesake matriculating at his beloved alma mater, it brings a tear to my eye.

What am I talking about, anyway?  Just because we can't see Dad anymore, that doesn't mean he can't see us.  He's probably got the best seat in the house these days.  And when he looks at this boy, this grandson who shares his name and his jawline, I'll bet he's smiling.

Email ThisBlogThis!Share to TwitterShare to FacebookShare to Pinterest
Labels: family, life with boys