I've already made it quite clear in this blog that I'm not a huge fan of cats (August 7, 2011: "No Cats, Please!"), largely due to the fact that I only narrowly survived a premeditated sneak attack by Harvey, our lunatic black cat, when I was a teenager. As a youngster, I was as enamored of furry little kittens as any young girl is apt to be; but I lost my youthful naivete about those fickle felines as the years went by and it became obvious to me that cats are just sneaky opportunists. They don't really love you--not the way dogs do. So I am a dyed-in-the-wool dog lover; but there is absolutely no love lost between me and cats.

In January, I accompanied my pilot husband on a trip to Amsterdam, and while we were there we went out to dinner at a cozy, "mom and pop"-style Italian restaurant. I was amazed to see that there was a cat hanging out in the dining room, and moreover, that the proprietor had no intention of shooing it off the premises. This was certainly something I'd never seen before when eating out in the U.S.! We were seated at a table for two near the window, and this mild-mannered cat sat on the windowsill not more than a foot away from us, staring at us throughout the entire meal. Now my husband is no more fond of cats than I am (and is in fact slightly allergic to them), so you would think that this situation would be a bit stressful for us. But that cat kind of grew on me as we ate, and by the time we were getting ready to leave, I decided to pet him. That's when his true cat nature came out, along with his claws, and he hissed at me and made me remember why I'm a dog person. I repeat, I am not a fan of cats. (If you read "The San Remo's Cat" post on February 2, 2012, then you're wondering why I'm retelling that story; but hang on: I need to remind you about the cat we met in Amsterdam to set up a story about our new Greek cat friends.)

Recently, I accompanied my husband on another working trip, this time to Athens. After our first day of sightseeing, we climbed to the top of a hill called Lycabettus, which provides a stunning panoramic view of the city, to watch the sunset. We ordered two bottles of Mythos, and as we sat at an outdoor table and sipped our beers and shared a bowl of mixed nuts, who do you think came to keep us company...but another cat! He was separated from us by a Plexiglas partition, but he sat there and watched us, just the way the cat at San Remo's had done several months before. What is it about us that attracts cats? we wondered. (European cats, anyway.) 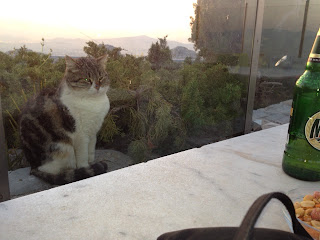 Well, the second night we were in Athens, we went out to dinner and were dining al fresco at a romantic little table for two...and guess who joined us? That's right, another cat! He acted just like the other European cats we'd met before him: he sat there patiently, watching us throughout our meal. There were other diners nearby, but do you suppose this cat was interested in any of them? Nope. He just wanted to hang out with my husband and me and stare at us, hoping for a handout no doubt. (Okay, I'll come clean...his good behavior did earn him a piece of sausage.) 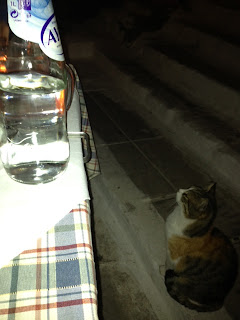 For some reason, the word is out in Europe that my husband and I like to have the company of kitty-cats when we go out to eat. I want to say that these recent experiences have made me even less fond of cats than I was already...but I must sheepishly admit that those little critters are beginning to grow on me. At this point, if I ever go on another trip abroad with my husband and we aren't joined at the table by a cat, I'm going to feel like something's missing. Oh, no...am I becoming a cat lover? (I'm so ashamed to admit that. Almost as ashamed as I was to admit, on the day after the Patriots' Super Bowl defeat to the Giants, that I like Eli Manning...) Those darn cats! Just when you think you've gotten them out of your system forever, they draw you back in!

(By the way, I'm really dating myself with the title of this post--with a reference to Walt Disney's 1965 film "That Darn Cat!", starring Haley Mills and Dean Jones.)
Posted by Laura Pearl at 7:15 AM