I have a little ceramic sign with that saying on it hanging in my kitchen, and I love it. I also have this framed sign, given to me as a gift from one of my sisters-in-law (who knows just what a chocoholic I really am), hanging over the doorway that leads from our kitchen into our man room/sports room/"new" room: 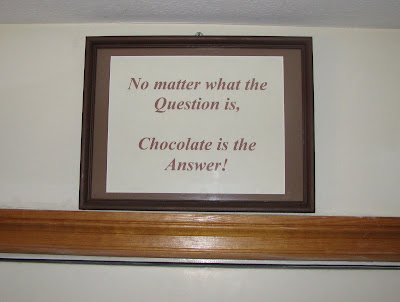 I realized after I'd posted my blog yesterday that when I was listing the foods my uber-picky middle son would eat when he was a little boy, I'd forgotten to add the most important item of all: CHOCOLATE!

He's not alone, though, because everyone in this family loves chocolate. My husband, oldest son, and daughter-in-law prefer dark chocolate, while my other four sons and I would choose milk chocolate over dark in a heartbeat. Some of my boys also adore white chocolate (which I'm not even sure is technically chocolate--but we count it). When making desserts for my family, you simply cannot go wrong if you make something that includes chocolate.

One of my favorite desserts to make is a batch of good old Tollhouse chocolate chip cookies, so I often have bags of semi-sweet morsels in the cupboard. I am careful--most of the time, anyway--not to open them up until I'm just about to stir the chips into the cookie batter, though. If the bag is intact, it will be left alone; but an open bag of semi-sweet chocolate chips is fair game around here, and nobody can resist it. Especially son #1--which is kind of funny, because other than this weakness for chocolate, he's one of the healthiest eaters you've ever met. He'll take a bowl of plain yogurt (ewww!), add a little brown sugar to flavor it, and throw in a healthy dose of Grape Nuts cereal to give it some crunch (though my husband insists that's like chewing on gravel). I think his favorite food group is vegetables, whereas my middle son's favorite food group is Reese's Peanut Butter Cups. He eats raw broccoli as a fun snack the way some people eat potato chips. But that boy cannot resist an open package of semi-sweet chocolate chips. If he visits your home, be forewarned: you will have to hide the chocolate chips.

I got creative in my attempts to find ingenious hiding places for them when he was still living under this roof. (It became a kind of game we played.) But it was positively spooky how good he was at sniffing them out, even when I'd found the most bizarre places to stow them away. Once, I'd stashed an opened bag of chocolate chips in a hatbox in the dining room. I had three decorative hatboxes from T.J. Maxx stacked one on top of the other, largest to smallest, and I was using them to store some dishes and linens. My boys almost never went into the dining room, much less noticed my cutesy little storage containers; besides, I'd put the bag in the middle box, not the top one where it would be easy to find. I thought my chocolate chips were safe. But my oldest boy decided to mosey by those hatboxes, and for some unfathomable reason he got the urge to lift the lid of the one in the middle of the stack. He came into the kitchen carrying his prize and wearing a cat-that-ate-the-canary grin on his face. We all had a good laugh over that one. (What made him lift that lid? How did he know that bag would be there? Was he the "Chocolate Whisperer"?)

I'ts my fault, I suppose: I could not resist chocolatey goodness--particularly bite-sized Heath bars--when I was pregnant with him. He can blame his chocoholic tendencies on his chocolate-lovin' mother. As far as my kids' love of chocolate goes, I'll borrow a favorite saying from my dear late father-in-law, himself a Hershey's Kisses devotee: "They didn't get it from the neighbors."

But hey, chocolate sings. And it's the answer.
Posted by Laura Pearl at 8:19 AM