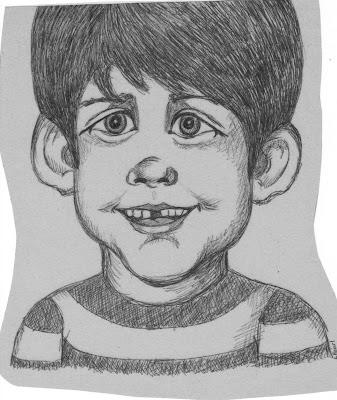 Two days ago, I blogged about some failed attempts at having a couple of children's books published way back in the 80's. Thinking about them again, and breaking out all the illustrations I'd created with such youthful hope, got me in the mood to get everything organized. So I went to Michael's yesterday and bought a big portfolio with protective plastic sleeves. Now all of that old artwork is neatly organized, instead of jammed into deteriorating oversized envelopes and folders. (I love to organize things! From time to time, I even enjoy watching home improvement shows where messy, cluttered-up houses get cleaned up and organized, like TLC's "Clean House.")

Anyway, in my travels I came across the 1982 illustration above, which I planned to use on the cover of a masterpiece (not!) about a little boy with a big imagination. And when I looked at it, I actually gasped a little.

This pen and ink drawing doesn't much resemble any of my five sons (who were only twinkles in their parents' eyes at the time it was rendered); but it looks so much like a five-year-old Pearl family nephew of mine--a cutie who is actually my godson--that it's positively uncanny! It's got his huge eyes, his impish killer smile, and his straight dark hair. If it had his dimples, the resemblance would be complete. I find it amazing that I sketched this thirty years ago, a quarter of a century before this nephew was even born, and it could be him.

Maybe I'm imagining it, though. Does anyone else who knows which nephew I'm talking about--the miniature magician who put on a show for us at Christmas, if that helps--see a resemblance? Is it really that uncanny, or do these old eyes of mine deceive me?
Posted by Laura Pearl at 7:03 AM