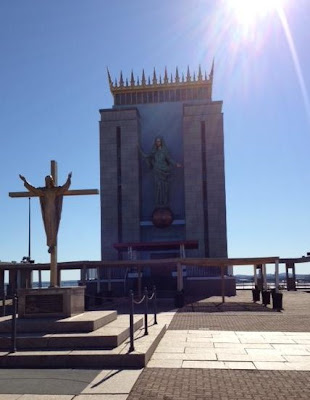 Isn't this shrine to Our Blessed Mother magnificent?! My husband and I went to see it last Sunday afternoon on our way back from the airport in Boston (the day after our "date night" in Atlanta, when my husband flew down to meet me because I got stuck there as I was making my way back home from our oldest son's home in AL).

For the past 21 years, every time we've driven to or from the airport, we've passed a huge billboard sign that reads: "ON THIS HISTORICAL SITE, 35 FT. STATUE, Madonna Queen, National Shrine, TURN NEXT RIGHT."

I can't count the number of times I've said to my husband, "I wonder what that's all about. I really want to see that statue someday." But usually, we're in a hurry to get where we're going, so we'll decide to do it another time. Well, that time finally came last Sunday...and I have to tell you, it was spectacular. The above photo doesn't begin to do it justice; you have to see it in person to get the full effect. This gigantic floating image of Mary the Queen of Heaven is framed by bricks and "crowned" in gold, and it sits on a hill that overlooks the city. It's enormous and beautiful and absolutely awe-inspiring. Hard to describe, really. So if you're ever in the vicinity of East Boston, MA, you should check it out.

I thought I was going to be passing that big blue and white sign once again this morning, because I had decided to accompany my husband on a three-day trip to Amsterdam. I'd rather avoid flying at all costs; but now that our kids are grown and out of the house, I want to spend as much time with my guy as I can. Since he has to live so much of his life out of a suitcase--and has done so throughout his long airline career, sacrificing all that time away from home to provide for his sons and me--I'm trying to learn to become a frequent flier. (You know, for the team.) I'm sure that most people would think I was a complete fool if I hesitated for even a minute to go on an all-expenses-paid trip to Amsterdam. However, I was feeling a little nervous about today's flight; I even thought about coming up with excuses for why I shouldn't go. I'm sure if I tried hard enough, I could come up with a plethora of plausible excuses.

Part of me was excited about the trip. Even though I'd just accompanied my husband to Amsterdam back in late January, I was looking forward to the royal treatment in business class on the way over (because that's how I roll, people), and to attending a Latin High Mass with him tomorrow at a Catholic church near the crew hotel. I was also looking forward to another top-notch Italian dinner tomorrow night at San Remo's--and checking in on the restaurant's cat-in-residence (the one I wrote about in a blog post on February 2, 2012). My husband has been to Amsterdam since our trip together, and he says our little feline dinner companion is still prowling the San Remo's dining room.

Yet part of me, as always, was getting the jitters. (Remember that scene from the slapstick comedy "Airplane," where the plane is going down, and the passengers are watching a movie showing a plane crashing and bursting into flames? That's the very movie that was playing in my head last night.)

I guess you could say I dodged a bullet, though; my husband woke up feeling under the weather this morning and had to call in sick for this trip. I'm a bit relieved, because I'd rather spend time with him--nursing him, if necessary--right here in our house...on the ground, where we belong. But I'm also surprised to find myself feeling slightly bummed out that I won't be going to Amsterdam today. Do you suppose that means I'm beginning to conquer my aviophobia?

I'm going to keep battling it, that's for sure. And every time we drive past that billboard on the way to the airport, I'm going to remember this beautiful shrine with the 35 ft. Madonna Queen statue. And it will remind me to pray to Mother Mary, asking Her to give me faith and courage when I travel by plane.
Posted by Laura Pearl at 7:41 AM