This summer, I have decided to rededicate myself to this blog!  I don't know why I felt the need to make that a bold exclamation rather than a simple statement--because trust me, I really don't expect anyone out there in Internetland to be as excited about this not-very-newsworthy development as I am.

But I AM excited, because I miss being here.

I have spent the last few years using Instagram as my main social media fix, writing easy-to-digest blurbs and hashtags on my iPhone to go with carefully selected and filtered pictures...and while it's been fun and interesting in its own way, I have begun to realize that it's not all that good for me, and that I miss actually sitting down at my laptop every day and really writing.

If you follow Jenny Eubbing's Mama Needs Coffee blog (isn't she the best?), you might have read her recent post titled "He Is Doing a New Thing,"  in which she talks about ditching her other social media accounts and getting back to her first love, blogging (and also working on another writing project about which she is being somewhat cryptic, but which sounds like a book).  What she had to say in this post struck a chord with me.


Eubbing writes, "when I am on Instagram, I literally see life differently. I’ll squint at a funny or terrible toddler episode through a critical eye and consider 'is this good content?' before snapping a picture and freezing a moment and sort of stepping back from the present moment like I’m the creative director or producer of my own life.


When I am the producer of my own life, I am not actually in it, moment by moment. I’m thinking of getting the shot, of capturing the quote. I’m thinking of you guys, of an audience out there, waiting and willing to consume the funny or thoughtful or entertaining content I’m blasting out into the world. And there isn’t anything wrong with that at first glance, right? Except that, for me, it’s constant. It’s not like a well-planned and carefully policed time limit where I indulge in harmless good fun for a set number of minutes a day and then put the phone away, it’s constant.


Is it possible to become addicted to hearing your own voice? That’s how instagram makes me feel."
Yikes, I thought when I read that, I too may have a bit of a problem...
Eubbing also said, "I feel so incredibly convicted that the very nature of the game: the algorithm, the endless dopamine feedback loop, the social positioning and posturing and signaling, is not just benign wasted time, buy is actually bad for us."
Okay, it's clear that I do have a problem--and maybe it's time for me to scale back drastically on Instagram, if not completely.  That "dopamine feedback loop" Eubbing references--that high you get when someone likes one of your IG posts (especially someone well-known, an "influencer" whom you admire, with a platform that has thousands of followers)--is addictive.  For most of the years that I've been a blogger, I wrote because I was inspired to and because I loved the process itself, and I seriously never even thought about who would see a particular post, or who would like it; but with Instagram, the insta-gratifiction of all those likes is dangerously seductive. I have craved those Instagram interactions more than I should over the past three years, since our big move to VA from our longtime home in NH. While the pluses of having four out of our five married sons--and all 16 of our grandkids!--close by are countless, as are the blessings, as a shy and introverted sort I have not really made any non-family friends yet in our new hometown.  So I think I've been using my Instagram friendships as a sort of lifeline.  But the fact that I will meet few if any of the people with whom I've become friendly on the site makes it seem a little pathetic that I've been spending so much time there.

So back to the blog it is!  I do this mostly because I love to play with words, to rearrange them and edit them until they sound just the way I want them to.  Sometimes I have something deep and meaningful to say, but more often I'm just here jotting down family memories so that they'll live on for our kids and grandkids long after we're gone.

I decided to clean up my sidebar and make it less crowded with links to products that I endorsed years ago.  I also decided to change my photo.  The one I've been using for ages was taken in 2012, about a year after I started this blog, and I don't look quite that young anymore.  Back then, I had just published my first novel, Finding Grace, and I wanted to look like a writer, so I posed sitting in front of my laptop at my dining room table and my husband good-naturedly took this picture. 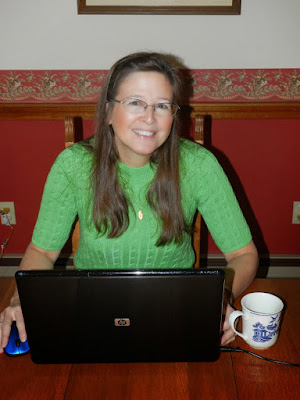 Back then, I was 54 and had one married son and wee twin granddaughters.  Oh boy, how things have changed.

This is more how I look now--especially since I have a baby on my lap, which is a near-constant state of affairs (lucky me)!  I'm more of a hands-on Grammy than a writer these days. (This darling little girl is the youngest of our middle son's four children; she's also the youngest of our 16-going-on-17 grandchildren--the latest gem on our ever-lengthening string of Pearls.) 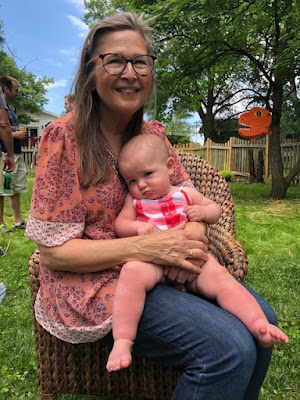 Next month I'll turn 62.  Gulp!  My husband turned 62 today, and I said, "Yikes!  In 8 years, we'll be 70."  I can't wrap my brain around 60, so 70 is going to be beyond weird.  But little people like the one lounging sleepily on my lap in that picture make growing old a lot less painful for both of us.

As far as updating my photo, I decided to choose one where I'm wearing a string of pearls (it seemed apropos).  It is actually cropped from a selfie my husband and I took this Easter, when we got all dressed up in our Sunday best to live-stream Mass at home on TV.  (By next Easter, I hope this quarantine/lockdown era will be a hazy memory.) 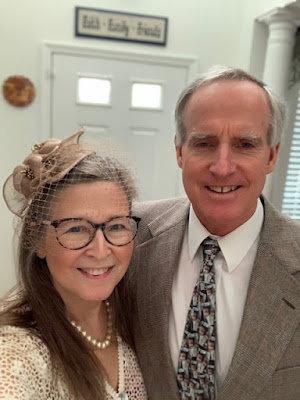 Happy Birthday to that handsome guy there, the one I fell in love with in 1973, and the one with whom I'll celebrate 40 years of marriage this December.  It's been a great ride so far, and I wouldn't want to be on it with anyone but him.  (Also, I know he will be happier than anyone that I'm going to try to blog regularly again, because he is my most ardent follower and biggest fan, and he is not biased in the least!)