Remember this post that I wrote back in May, in which I told the story about how our third- and fourth-born sons and their wives announced that grandchildren #15 and #16 were on the way?  (They did so in hilarious fashion--it's a fun post, if you haven't read it yet and you'd like to take a minute to do so.)

Anyway, #15, a sweet granddaughter, came in October, and I wrote about that new little one here, in a post titled "Hola, Hermanita!"  She got a Spanish blog handle because her mama is of Spanish descent.  Well #16, another precious granddaughter (bringing the String of Pearls total to 9 granddaughters, 7 grandsons, so far), is part Hispanic as well.  Her mama is half Cuban.  So this new little Pearl gem is going to be known here at the blog as "Hermosa."  She joins brother G-Man (5), sister Princesa (3), and sister Rosita (2).

On Nov. 9, the Saturday before Hermosa arrived, my daughter-in-law Preciosa was 39 weeks along and feeling as if she could go at any time (she'd been five days early with her first three babies).  My hubby was on a trip, so I asked if they'd like me to come and help out for the day, and said if they wanted I could even stay overnight just in case things got going.  We live about 35 minutes away, and I probably would have made it in time if I'd gotten the middle-of-the-night call; but I was alone anyway, so I thought, why don't I just come for a sleepover?  Preciosa's mom was en route, driving all the way up from FL to help out with the three older kids when her daughter was in the hospital having the baby.  But she was not due to arrive until Sunday--so my boy and his better half were all for the idea of me staying the night.

The baby did not come on Saturday.  But I got to have movie night on the couch ("The Grinch," a new animated version), in jammies with popcorn, with my adorable grandchildren.  So it was a win for me. 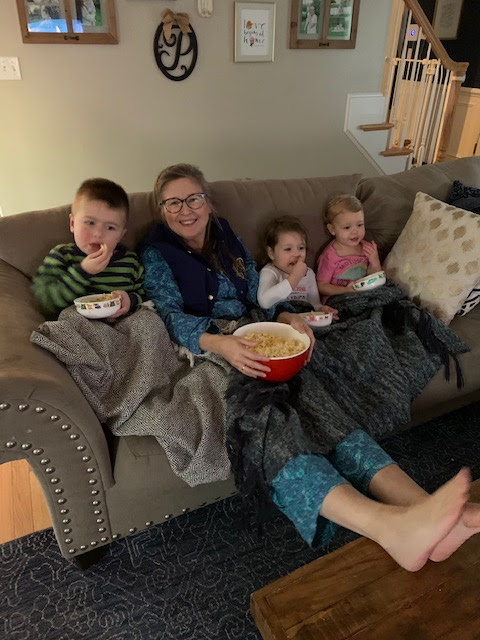 It had previously been decided that if Preciosa didn't go into labor on her own over the weekend, she would be admitted to the hospital on Monday morning and labor would be induced, so this is what eventually happened.  I had been relieved of childcare duty on Sunday, after Preciosa's mom arrived.  But on Monday afternoon, I took over for her so that she could be there while her daughter was in labor.  As it turned out, she was also there in the room when the baby was delivered and this was a thrill for her, as it was the first time she'd been present.  (She'd been at the hospital when each of her older three grandchildren had been born, and had met them shortly after their births.)  My husband joined me for babysitting duty at about dinnertime, and after we'd gotten the kids to bed we waited together for the news, which came at about 7:30 p.m.

We received some pictures of our precious new baby girl via text.  What a wide-eyed little beauty! 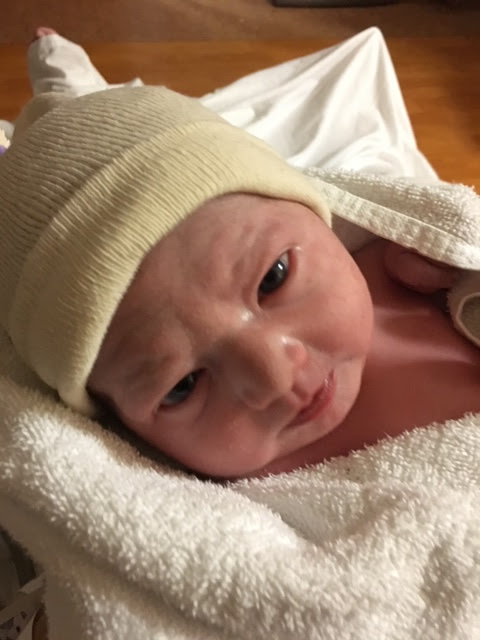 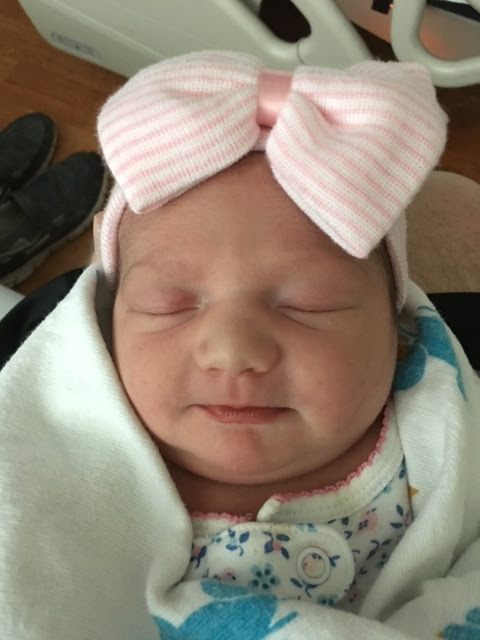 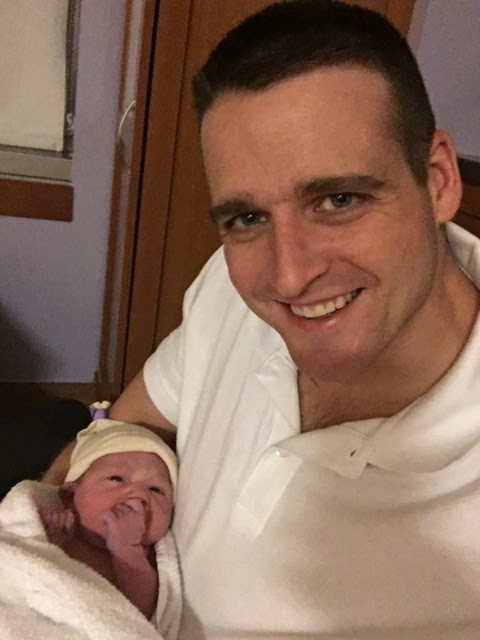 We headed back home Monday night, because my husband had a work trip scheduled the next day.  But I was able to go over to the hospital and meet this newest addition to our ever-growing family the evening following her birth. 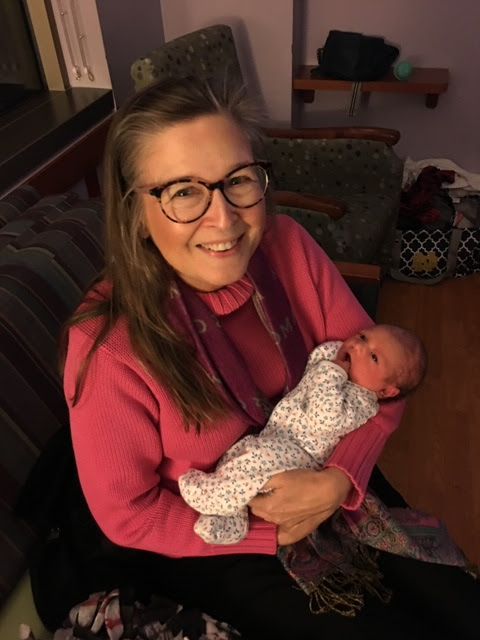 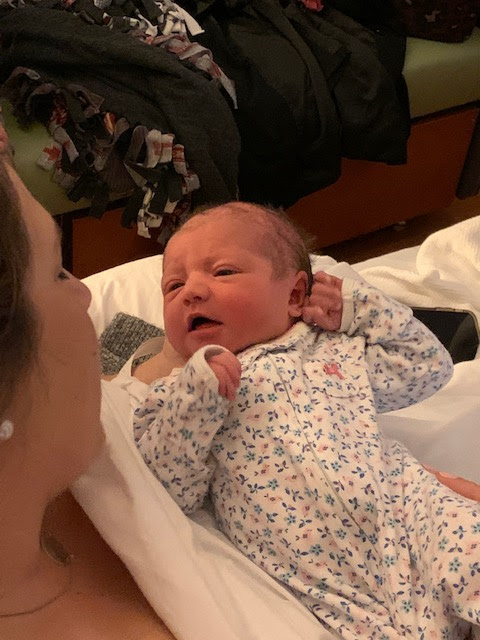 I have to say that I thought she was the most beautiful one-day-old baby I'd ever seen.  Well, at least since last month, when I saw one-day-old Hermanita.  And actually, since the times I've seen every single one of our 16 grandchildren at a day old.  (That's not me being biased, that is just objective truth!  We have the most beautiful grandchildren on the planet!)

Yes, son #3 and his wife have certainly got their hands full these days...but their hands are not as full as their HEARTS! 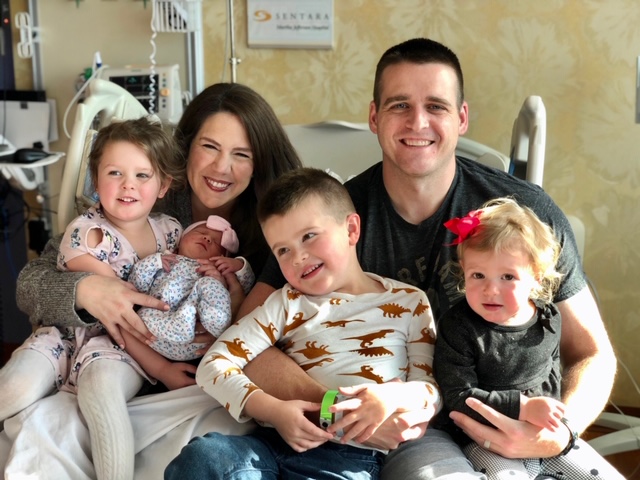 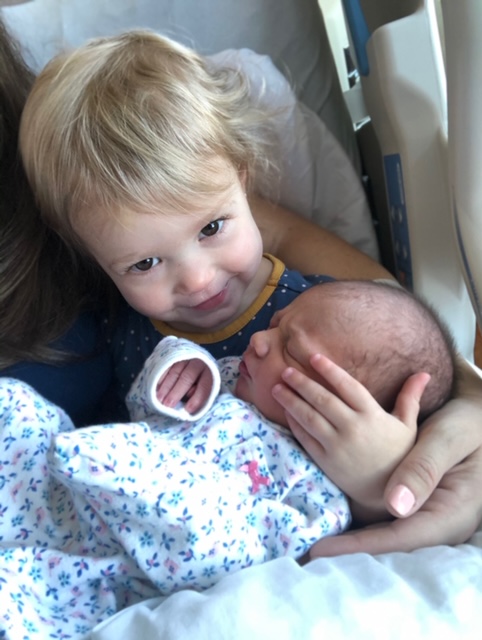 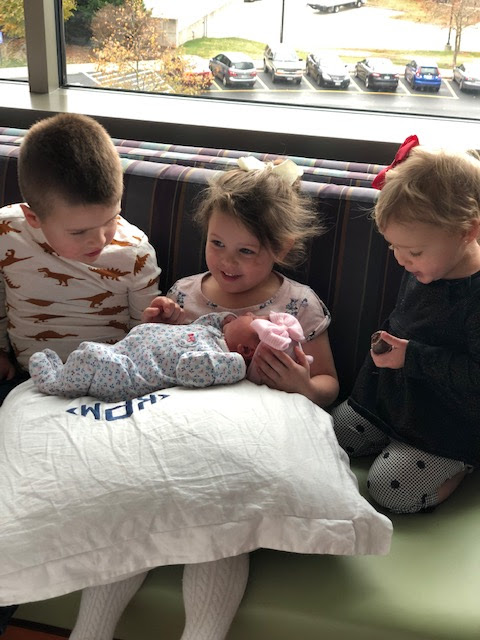 And this Grammy's heart is pretty full as well.
Posted by Laura Pearl at 12:02 PM